Do not show again [X]
By Greg Olear   2011 December Security 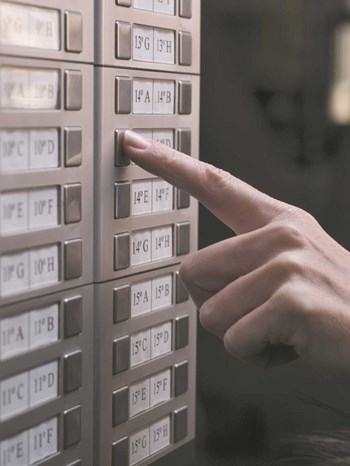 A few years ago, when I lived in the East Village—in a one-bedroom, fifth-floor walk-up—I had a creepy experience when the cable guy came to hook up our service. He arrived in a beat-up windowless van that looked like it had been boosted from  an impound yard, and nothing about him betrayed the fact that he worked for the  cable company. He might have been a subcontractor to a subcontractor, for all I know. But something about him seemed shady.

All he had to do was turn on the juice—there was already a cable in the living room—but he took his time inspecting our apartment. He took particular interest in the window overlooking the side alleyway, and  made some remark that it would be easy to access said window from the roof. And he stayed much longer than he should have, his beady eyes taking in every  square inch of our small living space. “Wow,” we said after he finally left. “He was totally casing the joint!”

As it turns out, he did not return; the apartment was never robbed, probably  because there was nothing of value to steal, and even the most ruthless of  burglars would rather not carry a 90-pound TV set down five flights of stairs.  But the experience demonstrated to us a fact of city life: we are all  vulnerable.

While the vast majority of cities across the country—including our fair metropolis—report declining crime statistics, the fact remains that crime still does happen  sometimes—even in the toniest, quietest, safest places in the city. As Enid Hamelin, a property manager and the director of marketing for Lawrence  Properties, put it, “In the city of New York, anything is possible.”

If anything is possible, Scott Vogel has seen just about everything. He’s the director of operations and communications for Linden, New Jersey-based  Emergi-Clean, a company you call to clean up after the last scene in Reservoir Dogshappens for real in your building. And sometimes, it does.

“We get it all,” he says. “Stabbings, shootings—you name it.”

In one gory incident a few years ago, Vogel recalls, a dispute between residents  turned particularly ugly. “Both of them had knives and were stabbing each other,” he says. “Thirty-six stab wounds later, one guy died. The other person had seven stab  wounds.” Talk about making a point. Vogel and his crew had their work cut out for them.

Puns aside, there are two key things to keep in mind, should the unthinkable  happen at your co-op or condo. First, if there is a violent crime in progress, do not take matters into your  own hands. “Don’t confront them,” says Arlene Waye, president of Awaye Realty Management in Brooklyn. “Call 911.”

Vogel agrees. “Don’t try to stop it. If anything happens, call the authorities. Don’t intervene. It only escalates the situation. If that person has a weapon, chances are you’ll be a victim, too.”

In the rare instances when bloody crimes occur, the building often dispatches  the super or another employee to return the site to normalcy after the fact.  Although this might make intuitive sense, it should be avoided, Vogel says;  cleaning up human remains—whether blood, or worse—requires more training than supers tend to have.

Which brings us to the second point: if something terrible does go down, be  ready. “Have a plan set in place, in case it does happen,” says Vogel. “This way, the building has someone to call to clean it up.”

Fortunately, the lion’s share of crimes that occur in co-ops and condos are not ones that require  Emergi-Clean’s services. White-collar crimes like embezzlement are more common, as are  robberies. Sometimes there are muggings, too, although these tend to occur  outside the actual premises. And there are precautions smart buildings can put  in place to lessen the chances of those crimes from occurring.

First, it’s obviously helpful to have a doorman—and to make sure the doorman is one who actually mans the door, and does not  leave the door propped open with a folding chair at 2 a.m. while he runs around  the corner to buy a pack of cigarettes.

“The doorman is the first line of defense,” says Anton Cirulli, director of management at Lawrence Properties. Having an effective doorman to make sure visitors—especially contractors and delivery people—sign in and get out. They make sure they leave the building in an appropriate amount of time and aren’t wandering the halls.”

One of the most common security breaches, especially at a large building, is  when a resident holds the door open for someone to come inside. Although this is unquestionably polite, it’s imprudent, and can potentially put everyone in the building in danger. “When you go in the front door,” says Waye, “don’t let anyone else in.”

A doorman, of course, solves this common problem. The mere presence of a uniformed employee at the gateway to the building is  enough to deter would-be criminals. But doormen must be kept in the loop.

“Periodically we hold a conference and alert the doorman to be on the lookout,” Cirulli says. “We make sure our doormen—our first line of defense—are fully briefed.” He advises working with the local police precinct so the doorman and other  building employees can be on the lookout for suspicious behavior. If there is a rash of muggings or other assaults in a certain neighborhood, as  sometimes happens, the doorman must be aware of this.

Of course, not all buildings have doormen. This does not necessarily make them  hotbeds of crime. In those buildings, too, there are precautions that can be taken to lessen the  chance of criminal behavior.

“Having surveillance cameras is a big deterrent,” Waye says. She recalls a recent incident in which a resident in a co-op,  arriving home late at night, was mugged. The perpetrator followed the resident into the lobby, swiped her pocketbook, and  vanished into the night.

“We had surveillance cameras,” she says, “and were able to get photos. The gentleman was caught because he was seen  getting into a car nearby—he’d been vandalizing other buildings in the neighborhood.”

Cirulli is a big believer in the eye in the sky. “We have camera systems in all our buildings,” he explains, “so if there is an incident, we can review the tape. We can put a face on people we know were in the building.”

Criminals are not known for playing by the rules. Cameras may not scare them off, especially if they’re high on drugs. But most thieves are not looking to get caught. Even a dummy camera is enough to send them scurrying away to the next building.

Other precautionary measures boil down to common sense.

“Don’t open your wallet when there are people watching,” says Waye. “Don’t show people you’re carrying a lot of money.” This may not in and of itself cause a mugger to strike but it’s still prudent to keep your proverbial cards close to the vest.

Also: keep track of whom you let into the building. If someone buzzes your  apartment claiming to be a UPS guy, and no one shows up for awhile, you might  have a problem. So don’t buzz anyone in unless it’s someone you know or are expecting them.

At the end of the day, there is hope. As mentioned, crime is on the decline in  New York, and has been for some time. While there will always be incidents—it’s part of human nature—these simple precautions can help prevent many crimes from ever taking place.

And it’s not like there’s a rash of crimes in co-ops and condos. Cirulli for one says that “In the past 30 years, I’ve had four tenants claim they were robbed,” he says, “and all of them were suspicious.” For a property manager with three decades of experience in the nation’s largest city, those are enviable numbers—and a pretty good case for springing for surveillance cameras.