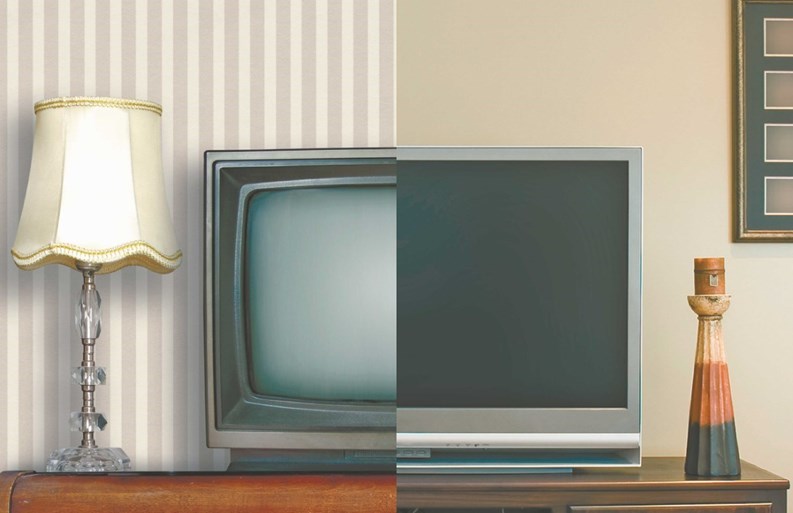 On September 7, 1927, 19-year-old Philo T. Farnsworth created the first television system that could not only display, but transmit signals between separate rooms. Now more than 80 years later, another historic date in broadcast transmissions is upon us. On February 17, 2009, all full-power broadcast television stations in the United States will stop broadcasting on analog airwaves and begin broadcasting only in digital.

“Congress enacted this as part of the Digital Television Act of 2005 and it was signed into law in 2006,” says Federal Communications Commission (FCC) commissioner Robert M. McDowell. “Part of the rationale is that it’s more efficient to use digital technologies, and they take up less of the spectrum than analog technologies.” What the changeover means is that any viewers who currently rely on antennas or “rabbit ears” to watch television will no longer get a broadcast signal unless they get a converter box.

Before you start panicking that you won’t be able to watch your favorite shows come February sweeps time, don’t fret. Condos and co-ops throughout New York and New Jersey have already begun preparing for the changeover, and every building should have all the equipment necessary to broadcast digitally by the time February 17th rolls around. In the meantime, a little information might be helpful.

While it may seem crazy to some that people still watch TV the old fashioned way and haven’t made the switch to cable, not everyone needs that many channels—and not everybody can afford them.

The expiring analog channels in most cases allow for up to 21 channels, including all the major networks. The main job for condos, co-ops, and homeowner associations in dealing with the changeover is to hire a master antenna service provider to update the equipment that is sitting on their roofs.

“Most master antennas are set up for VHF (channels 2-13) but they need to upgrade to a UHF antenna and get a UHF amplifier,” says Tom Dantschisch, a technical adviser with Atlantis Security, Inc. in Bayside, Queens, who has been working on master antennas for more than 30 years. “The hardware itself is nothing more than what you would see on the roofs—it just has to accept the UHF frequency. You need the amplifier to boost the signal down to the rest of the apartments in multi-unit dwellings.”

Just about every building in New York and New Jersey has a master antenna for residents who have never made the switch to cable or satellite and by law, they need to make this change.

“Every single building is going to have to have an upgrade or conversion,” says John Neos, who is the president of Atlantis Security. “A lot of these properties have checked with their attorneys who have advised them that [not converting] would be considered a reduction in services—so they have to provide it to tenants.”

Nortronics, in Fairview, New Jersey, is another security firm that still does between 10 and 20 percent of its business as a master antenna service provider. According to project manager Kevin Newell, they have been very busy these days helping buildings make the change.

“We already service over 500 buildings in the area…so we have gotten calls from them and calls from people who heard about us through other property mangers,” he says. “We come in, we change out the antenna, change out the amplifier and splitters and modulator for lobby cameras.”

The cost of the digital upgrade depends on the size of the building and number of units in it, but generally it will run a building $2,000 or less. The job itself can be done in a couple of hours, with minimal disruption of any service.

“Actually the work is not so difficult,” says Joe Bux, manager of Baybridge Condo III in Bayside, Queens, which recently went through the conversion. “The learning process is difficult, because at one point, we couldn’t find any literature that said you needed a new antenna on the roof.”

Baybridge Condo III consists of 20 buildings, made up of 111 townhouses. The existing VHF antennas on each rooftop, Bux explains, were replaced with a new combination VHF/ UHF antenna. They were able to use the existing wiring in the building, and a new amplifier was put in the basement that replaced the old VHF amplifier. The price, (which came to about $700 per building,) Bux contends is worth it.

“If [a resident] doesn’t have a digital TV, they will need to get the converter box,” Dantschisch says, “but all TVs will work with this, regardless [of] if they are digital or not.”

So why the switch? In short, digital broadcasting will allow stations to offer improved picture and sound quality and additional channels.

“You can actually pack much more into the digital signals,” says McDowell. “That leaves leftover spectrum for us to use for new technologies, such as long distance wireless broadband or public safety technologies.”

Some consumers are still very concerned about how the switch will affect them and their buildings.

“The anxiety is definitely understandable,” McDowell says. “The folks who are already enjoying the benefits of digital television are finding out they get a better picture quality, sharper images, much better sound quality and they are receiving more channels. That’s one of the great secrets of digital television.”

“Another benefit of the shift to all digital broadcasting is that the viewer’s experience will be enhanced,” says Bob Watson, vice president of programming and business development for Time Warner Cable in New York City/New Jersey. “Visual and audio quality is better in digital. And TV networks can use the digital spectrum to transmit high-definition TV.”

All the major cable companies in New York and New Jersey have been gearing up for the changeover, so subscribers to any of these cable providers don’t need to do much at all.

Throughout 2008, Verizon has gradually been transitioning to an all-digital format region by region and expects to be completely done before the end of the year. Customers with a set-top cable box don’t need to add any equipment, but Verizon customers who watch on analog TVs will require an adapter.

“We are offering customers a free digital adapter—they just have to call and let us know what they need,” says Heather Wilner, a media relations manager for Verizon. “Another option is to upgrade to one of our set-top boxes, which will let them see more channels and enjoy special features such as on-demand, HD programming and interactive guides.”

“As we phase out our local analog simulcasts this year, we want to make sure that our small number of affected customers can continue receiving this programming on sets they are using without a set-top box,” says Mark Adams, Verizon’s marketing director for the New Jersey region. “We’re reaching out to those customers now to help them get their free converter box from us so they can enjoy high-quality digital programming on every set in the home.”

According to Watson, Time Warner Cable customers don’t need to do anything to facilitate the changeover either. “They will continue to receive local broadcast channels without any interruption,” he says. “The company’s goal is to help foster a seamless transition for customers, and ensure that all New Yorkers are aware of the transition and understand what steps are necessary to continue to receive over-the-air television signals after February 17.”

Those who rely on Comcast for their cable needs also need not worry. “Comcast’s customers whose TVs are connected to cable will continue to receive broadcast channels without interruption after the digital broadcast transition,” says Fred J. DeAndrea, director of public relations for Comcast Cable’s eastern division. “If a Comcast customer has a TV not connected to cable—in guest bedrooms, for example—they will have the same options as a general consumer. If they give us a call however, we can connect all remaining TVs to our service so they can receive all Comcast has to offer on all of their TVs.”

Only consumers who use televisions with over-the-air antennas will be affected when the transition to digital broadcasting happens on February 17, but they will have different options.

For information on how to obtain a rebate to purchase this converter from an electronics store, visit www.dtvtran sition.org or call 1-888-DTV2009.”

Dantschisch says that while the old analog signals could get you as many as 21 channels, having a digital tuner or converter box will allow them to get as many as 43 channels of free television right off the air.

“Over-the-air consumers with digital converter boxes might still have difficulty getting a signal in some areas because digital broadcast signals do not transmit as far as analog signals,” says DeAndrea. “For consumers experiencing this problem with a digital converter box, cable television is an easy solution because the signal is brought directly into the home with no conversion.”

You can also get a TV with a digital tuner built in and that will pick up the signal without a converter box.

As long as you have a converter box, you won’t need to dispose of your old analog equipment, but for those who want an upgrade, both New York City and New Jersey offer numerous options for recycling obsolete electronics—and that includes TVs. In November, Time Warner Cable partnered with NBC/Universal’s Green Is Universal initiative and ‘Green Screens’ electronic waste recycling campaign at various New York City drop-off locations for unwanted electronics including TVs, cameras, PCs and cell phones.

A recent survey by the Association of Public Television Stations indicated that more than 70 percent of over-the-air households knew what they needed to do to keep watching TV after February 17, but were slow to take the steps.

“Building managers and boards can help residents who currently watch TV using over-the-air antennas by encouraging them to get ready for the DTV Broadcast Transition in community newsletters, bulletin boards, and co-op/board meetings,” DeAndrea says.

When Newell upgrades a master antenna, he likes to talk with the property manager to make sure that all the residents are aware of what’s going on.

“We have our own personal fliers telling people and I’ve come up with a form letter to residents to explain what’s happening,” he says. “Also the FCC website has all the facts and I printed out all that and give that to property managers too after I complete the job.” The FCC also started a nationwide blitz this summer targeting 81 markets across the United States to get the word out about what was happening.