Do not show again [X]
By Denton Tarver   2007 Feb Neighborhoods 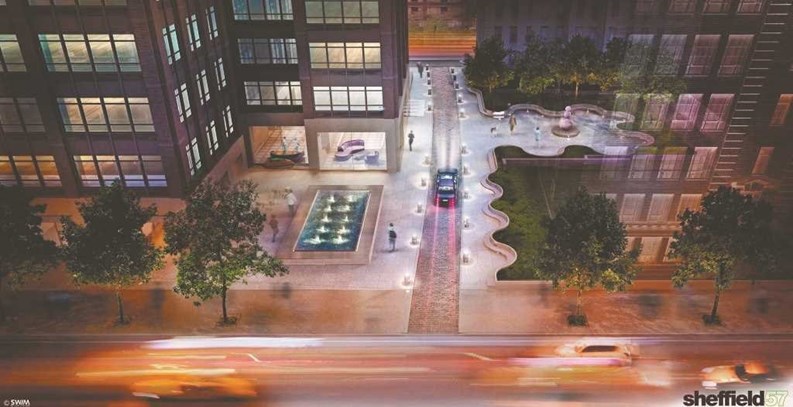 If New York City is a melting pot, then Hell’s Kitchen is the part of the cauldron that is closest to the fire. At least, it used to be. This section of Manhattan stretching from West 34th Street to 57th Street and westward from Eighth Avenue to the Hudson River is in the process of a dramatic transformation. Historically a haven for gangs, violence, and some seriously unsavory social elements, the new face of this neighborhood is the sleek, sexy, expensive high-rise condo building.

What’s in a Name?

According to neighborhood historian Mary Clark, the most common story traces its origins to the story of Dutch Fred The Cop, a veteran policeman, who with his rookie partner, was watching a small riot on West 39th Street near 10th Avenue. The rookie is supposed to have said, “This place is hell itself,” to which Fred replied, “Hell’s a mild climate. This is Hell’s Kitchen.” The brothels in the area went by such atmospheric names as the House of Blazes, where drunks were lured and set on fire for the entertainment of the girls and their less-soused clientele.

Investigating a double homicide, a police-escorted reporter from The New York Times put the name Hells’ Kitchen in print for the first time in 1881. The label aptly described the area: full of street urchins in gangs, putrid tenements, prostitution, drunkenness, lawlessness and permeating it all, the stench from the slaughterhouses and factories by the river.

In a more recent twist born of the city’s real estate boom, the area was unofficially re-christened “Clinton” or more recently, “Midtown West,” possibly by realtors attempting to take some of the starch out of the area’s reputation and get people to think of it as a more gentile neighborhood. While real estate listings often refer to the area as Clinton, residents of the neighborhood didn’t really take to having their stomping grounds renamed. The violence is gone, but the name Hell’s Kitchen seems to have stuck.

From Dutch to Desolate

Initially, Hell’s Kitchen wasn’t at all hellish. The first Dutch settlers arrived on a gentle slope of freshwater streams and grassy meadows. They called it Bloemendael, which sounds like a major department store (Bloomingdale’s store takes its name from the old Dutch word, incidentally) and actually means “vale of flowers.” The area was a pastoral paradise that eventually contained the farm of George Clinton who became the first Governor of New York and later the vice-president of the United States during the second-term of Thomas Jefferson’s presidency. Clinton was also the uncle of the famed DeWitt Clinton, mayor of New York as well as father of the Erie Canal and the city grid.

In 1849, the Hudson River Railroad built a station on the site of 30th Street and 10th Avenue, signaling the beginning of industry’s eventual hold on the area.  As the city’s immigrant population swelled, many of the Irish and Germans came seeking work on the railroad. Soon the area was home to factories, brickyards, warehouses, breweries, slaughterhouses, and the people who owned and worked in them—all needing quick places to live.

In an era before workers’ rights, many of these laborers lived short, squalid lives that often ended violently thanks to factory accidents, speeding rail cars, and crime. In 1863, when the Civil War’s Conscription Act saw the first names drafted in New York City, the poor rioted throughout the city, largely in response to the Act’s provision that a drafted man could pay $300 to escape service—that was nearly a year’s wages for most Hell’s Kitcheners. Hell’s Kitchen was a hotbed of discontent in an incident that later became known as The Draft Riots. The ensuing three days of mob rule saw an unknown number of deaths. Mass graves conceal the number, but the estimates range from several dozen to 1,000. The Martin Scorsese movie “Gangs of New York” was adapted from the events during this period.

Children coming of age in this era found their way into factory work to try escape destitution and gangs. These gangs were made up of orphans and street kids, often led by older children or unscrupulous adults—the most notorious of their day were the 19th Street Gang, the Gophers, the Dead Rabbits, the Battle Row Gang, the Parlor Mob, and of course, the Hell’s Kitchen Gang. By 1870, some 17,000 sailors were said to have been robbed in Hell’s Kitchen—many of them by young gang members barely out of childhood.

From the late 1880’s to 1938, between 35th Street and 42nd Street, Ninth Avenue was known as Paddy’s Market, one of the homes of the pushcart trade. Produce, livestock and goods were peddled here, where Port Authority meets the Lincoln Tunnel today. The Garment District, along Eighth Avenue, from 34th Street to 40th Street has been another prominent feature of historic Hell’s Kitchen. With shops in the front and factories in the back, these garment centers comprised one of the largest industries in New York. Hell’s Kitchen was the central residential and commercial hub for these industries, which eventually included the waterfront, as the port expanded up the Hudson River and across to New Jersey.

The neighborhood made way for the incoming masses over the years to include Irish, Italians, Germans, Central Europeans, and Puerto Rican immigrants. As each ethnicity grew in number so did their influence in the neighborhood cuisine, customs, and daily life.

Gang life again reared its ugly head, in 1959, when just after the final curtain of a performance of West Side Story, just a few blocks away from the theater, the Capeman murders gave Hell’s Kitchen new notoriety. After a rival gang failed to show up for a rumble with the Vampires, the gang instead attacked bystanders. Gang leader Salvador Agron was wearing a black cape with red lining during the fight, hence the name. From then until the end of the 20th century, Hell’s Kitchen maintained its reputation as a rough part of town.

Coming Clean and Taking Off

The 1990’s saw Hell’s Kitchen rise from its veritable ashes—circumstances began to change on Manhattan’s mid-West Side. As Times Square underwent its revitalization, so too did its residential neighbor. Real estate values increased and Ninth Avenue began its journey out of its disreputable past and into the coveted real estate market that it has since become, with hip new restaurants opening almost monthly, open-air antiques markets, and gourmet grocery stores serving a whole new array of residents.

Today, Hell’s Kitchen is one of the most central neighborhoods in Manhattan. Aside from the major points of entry via Penn Station, Port Authority, and the Lincoln Tunnel, the 42nd Street subway station is the largest connection center in the subway system. Times Square, just east of the neighborhood, is often called the center of the world. Convenience is the name of the game. Uptown, downtown, or out of town, it’s easiest to get there from here.

Shopping along Ninth Avenue is largely free from the major chains like Banana Republic and Express, but is heavily lined with restaurants of all kinds. Restaurant Row, on 46th Street between Eighth and Ninth Avenues is a haven for theatergoers and residents. New places to eat are popping up all the time and the cuisine ranges from Italian to Asian fusion, from American grills to sushi, from smoothie shops to some really great diners, and lots in between.

Hell’s Kitchen also has its share of parks, including Pier 84, which was completed in October 2006. A plethora of bars and coffee shops line the side streets and the Ninth Avenue thoroughfare.

The neighborhood is abuzz with construction and openings for sleek new residential towers. The Orion, the Lumiere and Sheffield57 are typical of the high rise luxury buildings that are cropping up in the area. According to figures from Corcoran Group, prices for co-op apartments in the final quarter of 2006 ranged between average sales of $463,000 for studios to $907,000 for two bedrooms. Condo sales for the same period averaged between $524,000 for studios and $1.5 million for two bedrooms.

According to Charlie Attias, a broker for the Corcoran Group who has handled many new rentals in these newer buildings, most of the rentals and co-ops in the neighborhood are still older units, but the new trend is definitely toward the high-rise condo. “Some of the spectacular units are at top dollar, like one two-bedroom unit that recently rented for $5,500 per month,” he says.

Of course, not all of the new developments are towers. Clinton West, at 516 West 47th Street, is a seven-story mews designed around a glass greenhouse and landscaped courtyard. The 149 units include studio and one- and two-bedroom apartments.

One 1,350 square-foot condo recently sold for $1.75 million—quite a sum for a neighborhood historically known as a perpetually seedy, violent corner of the city.

Not everyone is happy about the changes, however. The notable events from history paint an extreme picture of life here, and not everyone who made a home here was involved in violence and crime. Many of the longtime residents from this working-class neighborhood are finding themselves unable to keep up with the surging rent increases and other day-to-day costs that are rising along with the new condo towers.

The Hell’s Kitchen Neighborhood Association (HKNA) is a volunteer organization that is committed to improving the quality of life in this area. “Some of the condos here have flats selling for 2.5 million,” says Kathleen McGee Treat, the organization’s chair. “God only knows why anyone would pay that to live between a post office and a fleabag hotel, but that’s another story…”

“I got priced out,” says Seth Davis, a former Manhattanite who was uprooted by rent increases that were sometimes several hundred dollars per year. He now makes his home in Brooklyn.

“Only three years ago this was the last affordable neighborhood to rent in Manhattan—but not any more,” says Treat. With so many people moving to the area, new problems of congestion create a need for more city services. “We need many more buses, particularly the 42nd Street cross-town,” Treat continues. “ We need more traffic cops at major crosswalks. Ninth Avenue is already gridlocked 24/7.”

As the tide of gentrification engulfs one of the last remaining bastions of the classic New York neighborhood, the smaller businesses change as much as the resident population. “What’s most striking,” says Treat, “is that commercial rents along Ninth and Tenth Avenues have gone so high that only banks and bars can afford the monthly rent, and we are losing our neighborhood character of Mom-and-Pop shops—just like the rest of Manhattan.”

Despite that, Hell’s Kitchen can still be the place to find a deal, says Attias. “Chelsea, the Meat packing District, these places are not really accessible to the bargain hunter. You can still find a deal in Hell’s Kitchen, if you look.”

With its mix of new construction and disreputable past, the melting pot in Hell’s Kitchen is still boiling, only instead of less-than-savory social elements, it’s the buildings that are taller and hotter than ever.