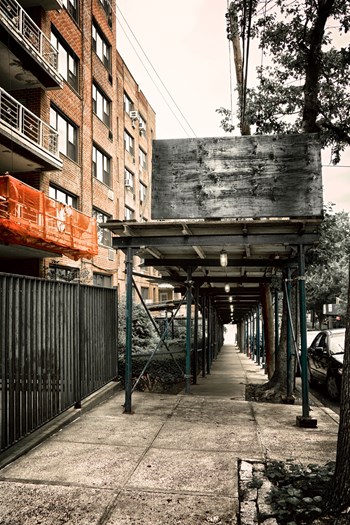 It’s pretty much impossible these days to walk anywhere in New York City -- Manhattan in particular -- without walking under scaffolding, otherwise known as sidewalk sheds. Made up of steel pipes and heavy-duty plywood, the 'sheds' are set up to protect pedestrians from any debris that might fall from overhead construction, renovation, or required façade work. Ironically, many New Yorkers aren't big fans of these protective sheds, calling them eyesores. In fairness, these scaffolds can pose problems, including providing cover for street crime, attracting encampments of homeless residents, and even sometimes collapsing, causing the very kind of injury they were meant to prevent.

How This All Started

The genesis of scaffolding as a permanent fixture on New York City’s streets goes back to 1979 when Grace Gold, a student at Barnard College, was killed by falling terracotta tiles from a building façade on the Upper West Side. The legislative result of her death was Local Law 10, which required buildings of six stories or more to conduct regular inspections of their front-facing facades every five years. That was replaced by Local Law 11 in 1998, which extended the inspection requirement to all facades, and imposed a requirement for protective scaffolding to be erected around buildings requiring facade work. In the 20-plus years since, scaffolding has become a fact of life on pretty much every block in every neighborhood.

How long scaffolding remains up around a given building is less clear-cut than the inspection law itself.  While Local Law 11 requires protective scaffolding to remain until repairs are made and properties are re-inspected, it does not mandate a time period in which the repairs must be made. Because the cost of façade repairs can be so onerous, many landlords will just keep the sheds around their properties indefinitely, rather than complete the repairs.

In the intervening years, with the threat of death-by-falling-debris receding from memory, many New Yorkers had had enough of the ubiquitous scaffolding, and the dirt and other problems they associated with the sheds. Incidents in both Manhattan and Queens where sheds have collapsed and injured pedestrians unlucky enough to have been walking under them -- including one on a SoHo street in November 2017, injuring five -- have not helped.

In October of 2017, Ben Kallos, City Council Member for District Five introduced legislation to change the current dynamic. The legislation would require building owners to fix dangerous conditions within 90 days of inspection, with one 90-day extension available. If nothing is done to correct the dangerous condition within 180 days, the City would do the work themselves, and bill the landlord or building owner. And If construction work does not commence within seven days, the landlord or owner would be mandated to remove the shed or face heavy penalties.

“Sidewalk sheds are like the once welcomed house guest that never leaves,” Kallos said in a statement on his website this past January. “While we need them for safety during construction, that construction must happen immediately, and then it is time for that sidewalk shed to come down. It’s time to change the city landscape by removing the swarm of sidewalk sheds that blight our neighborhoods. This legislation is good for businesses, tenants, pedestrians and will improve quality of life for the City.”

Josh Jamieson, a communications director for Kallos, says: “The bill, originally introduced in 2016, was re-introduced in 2018,” under the City Council’s rules for introducing legislation. “Some minor changes are under discussion, but no date has been set for a vote as of yet.” They hope that will happen in 2019.

Opposition to the legislation, however, comes from the Real Estate Board of New York (REBNY), which argued that the bill would further prolong construction activity and that sidewalk sheds are needed to protect the public during Local Law 11 inspections. In a memorandum released in October 2017, REBNY said:  “Observed inactivity on those sites could be due to a number of reasons.  Most common are delays in receiving DOB permits or inspections. DOB will need to be significantly resourced to insure timely plan reviews and inspections to comply with this bill. In other instances, building owners – most significantly, condos and co-ops – need to raise funds through self-assessments or market financing to continue or start the work. Observed inactivity at sites with sidewalk sheds does not necessarily denote that these sites have been forgotten or neglected. There are often building owners and managers working very hard to address the situation.”

The Reality for Co-ops and Condos

Unlike landlords of rental buildings, co-op and condo boards have a vested interest in getting work done quickly and efficiently. Boards must consider liability for both the possibility of debris falling from facades and the potential collapse of a sidewalk shed. Sheds are expensive, and co-op and condo owners would not view the long-term expense of keeping a shed around the building kindly. There’s also the question of curb appeal. Would prospective buyers be turned off by the unsightliness of scaffolding around their potential home for an indefinite period? Co-op and condo board members must keep safety and liability in mind, but at the same time require a timely resolution to their potential façade problems.

In the meantime, walk carefully among the scaffolds. 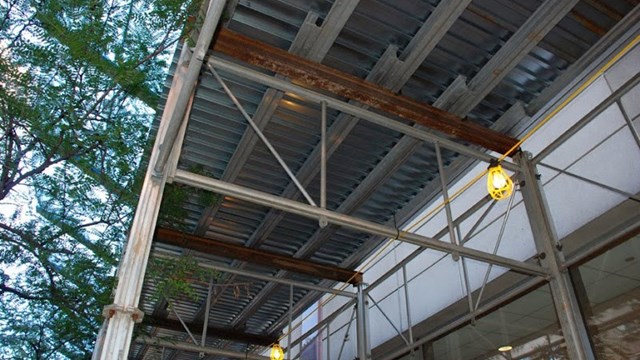 The Ups and Downs of Sidewalk Sheds

Donald Kinscherf on Senior Shareholders Get Another Shot at Reverse Mortgage Access:
This sounds good as seniors like myself need that extra income that reverse mortgages bring.
Rosemary Rotondi on What Happens When an Owner Dies:
This happened in my own co op building but with a very good lawyer the transfer goes well. Contact Morty Newburgh. NYC based lawyer Morty Ne…
ab on Co-ops Now Exempt from Portions of Tenant Protection Act:
When are coops allowed to begin charging late fees again?
Chitra Karunakaran on New York State Legislature’s Onslaught of Co-op Proposals:
The lawyer (co-op board President?) who presented this article needs to have his pro-business greedy lawyer, anti tenant/ shareholder views…
R on Dealing With Construction Damage:
I am being blamed for damage in a neighbors unit (causing by flooring underlayment which leaked through the walls). Based on the dates, I kn…