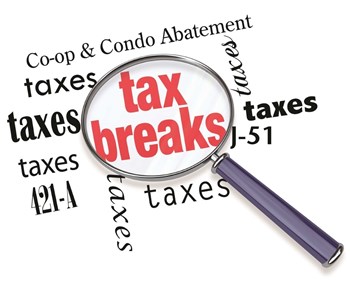 The age-old adage from Benjamin Franklin perhaps says it best: nothing is  certain but death and taxes.

And without some assistance on the legislative front, taxes are likely to  increase significantly for New York City co-op and condo owners in the near  future. Homeowners are facing a potential double-digit increase in their tax  burden for fiscal year 2012-13 if the state Legislature fails to extend the  Cooperative and Condominium Tax Abatement Program, as had been promised in  July.

The New York City tax abatement program gives partial tax relief to owners and  tenant-shareholders of residential Class 2 properties. This is because Class 1  properties (i.e., one-, two-, and three-family homes), are assessed at a lower  percentage of market value than their Class 2 counterparts.

According to the Department of Finance (DOF), the failure to extend the  abatement may require them to go back and issue higher tax bills later on. “If your property qualified for the 'Condo/Co-op Abatement' for fiscal year  2012-2013, your July 2012 Property Tax Bill was based on the anticipation that  the abatement would be in effect for fiscal year 2012-13 (which starts July 1,  2012). However, as you may be aware, the abatement was not extended beyond June  30, 2012,” said the department’s statement.

According to the Finance Department’s Annual Report on the NYC Property Tax for Fiscal Year 2012, under the program,  co-ops were abated to the tune of $298.6 million and $105.1 million for condos.

Co-op/condo leaders have been told that Albany lawmakers may have a special  session in October or November to reconsider the tax bills or will wait until  the beginning of the next 2013 session, according to Warren Schreiber,  co-president of the President’s Co-op/Condo Council and board president of Bay Terrace I in Queens. Schreiber  said he is hopeful that the extensions will pass, if not this year, in January.  PCCC co-president Bob Friedrich, the board president of Glen Oaks Village in  Queens, says he has been assured by the Assembly leadership that that New York  City tax abatement and the J-51 extensions will be taken up after the November  general elections.

However, Greg Carlson, a property manager and the executive director of the  Federation of New York Cooperatives & Condominiums (FNYHC), believes a special session this year is looking more and  more unlikely. The turmoil surrounding the investigation of sexual harassment  claims involving Assemblyman Vito Lopez and an alleged coverup and  publicly-funded payout by Assembly Speaker Sheldon Silver has been dominating  the headlines and capturing the attention of the Albany legislators. “The whole abatement situation is up in the air,” says Carlson.

The J-51 tax abatement program has been in existence since the 1950′s as an incentive to building owners to upgrade and maintain their building  systems and to convert unnecessary excess commercial space to residential use.  According to Paul Korngold, a partner at Tuchman, Korngold, Weiss, Lippman & Gelles, LLP, a Manhattan-based tax certiorari and real estate law firm, “In the 1980′s, the New York State Legislature recognized the importance of maintaining  cooperatives and condominiums and thus expanded the program to allow all new  cooperatives and condominiums as well as existing middle income cooperatives  and condominiums to obtain the tax benefits of J-51 for maintaining their  building systems.”

But J-51 has come under fire by the Bloomberg administration and legislators for  not being used as originally intended. According to a report by the Community  Service Society of New York, a 165-year-old group that does advocacy and  research to address poverty, “the J-51 program has become one of the city's most expensive incentives, costing  $256 million in 2011.”

Even as the cost of the program increased 50 percent from 2001 to 2011, the  number of apartments improved under the project only increased by 7 percent,  the report said. And the apartments being improved aren't tenement flats in  complete disrepair—most of them are luxury apartments.

The Finance Department’s 2012 report, however, estimates that the J-51 abatement doled out  approximately $87.7 million spread out among Class 2 co-ops, condos and  rentals.

Schreiber notes that J-51 is an extremely important incentive to help buildings  make much needed capital improvements, and he urged that it be re-extended. “It allows us to add new roofs and windows," Schreiber told The Bayside Patch.  "My co-op is 50 years old and needs new heating systems and boiler rooms.  Without the J-51, we’d still have to do the work, but the cost would be passed to the shareholders.”

The 421-a Property Tax Exemption Program, enacted in 1971, allows tax exemptions  for new developments when developers agree to build affordable units on land  that is vacant or underutilized. The program offers ten to fifteen year tax  exemptions, and if affordable units are built on the premises, the exemption  may be extended for an additional ten years.With a 10-year abatement program,  the building and its individual units get relief for the first 10 years of  occupancy. Real estate taxes for owners would be lowest in the early years of  occupancy and rise each year until the abatement expires.

In the last few years, substantial changes were made to the 421-a tax benefit,  according to Dione Herring, a paralegal at the Great Neck law firm of Gary  Rosen, P.C., which concentrates on 421-a tax abatements, condominium offering  plan filings and real estate closings.

Lots of heavily developed areas are still eligible for the benefits, says  Herring, but the revised 421-a program excludes luxury market rate developments  in Manhattan and newer areas of Brooklyn and Queens, says Herring. The intent  by the city is to benefit those properties where there is 20 percent affordable  housing or those housing units receiving substantial government assistance, he  notes. Twenty-five years of benefits are available only to those eligible  developments that provide affordable housing. The 421-a benefits vary depending  on factors such as location, method of construction and if requirements for  affordable housing have been met.

The law was changed six years ago to carve out a greater geographic exclusion  area or GEA, Herring says. Before the change, the exclusion zone, the area  where developments are required to provide affordable housing in exchange for  421-a tax benefits, included Manhattan from 14th Street to 96th Street and the  Greenpoint-Williamsburg waterfront in Brooklyn. However, with the expansion,  the new GEA now includes Manhattan south of 135th Street in West and Central  Harlem, and south of 117th Street in East Harlem, as well as an area between  124th and 126th Streets in East Harlem.

The expanded zone also incorporates additional Brooklyn neighborhoods, including  all of downtown Brooklyn, Carroll Gardens, Cobble Hill, Boerum Hill, Park  Slope; most of Fort Greene, Prospect Heights, Williamsburg and Greenpoint, and  portions of Sunset Park and Bushwick. In order to receive the tax abatement  inside the GEA, developers must provide 20 percent affordable housing on-site.  Developers can also buy negotiable certificates for the tax abatement as long  as affordable housing is constructed off-site or in the outer boroughs.

The amount of incentive money any one luxury unit could get was also capped. The  legislation imposed a ‘luxury cap’ that limits the total amount of 421-a tax benefits that any market rate unit  may receive. Only the first $65,000 of an apartment’s assessed value would receive the 421-a tax exemption. Projects, though, that  offer affordable housing on-site are not subject to the cap, in an effort to  increase the city’s inventory of affordable housing.

Carlson says that most of the co-ops he’s familiar with have been hit hard by an increasing tax load.

He adds that the expiration of the Co-op/Condo Abatement program is another  tough blow, and would be difficult to swallow if not reinstated. “This program has helped cooperative taxes be somewhat closer to what single  family homeowners’ would pay in real estate taxes.” Before the abatement program was enacted, he says, co-ops paid roughly three to  five times more in taxes than the owners of one-, two- and three-family homes  in the city.