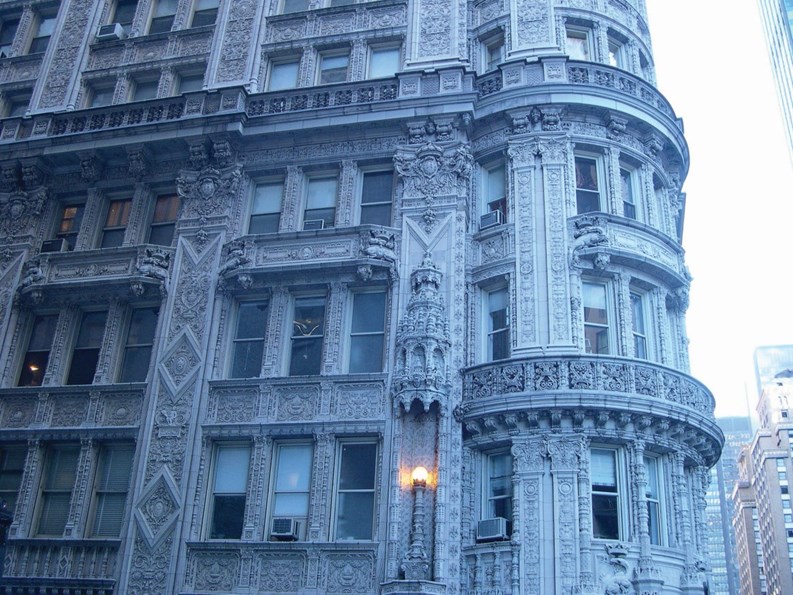 If you want to tour some of Manhattan’s most impressive apartment house architechture, a trip to the Upper West side is a no-brainer. There, you can view such buildings as The Osborne, the Beresford and the Van Corlear, all known for their mammoth scale and often imposing reputations.

Perhaps no building in this collection of high-end real estate is more remarkable than Alwyn Court, located at 58th Street and Seventh Avenue. Its façade is considered the most ornate in the entire city and its history is one Carter B. Horsely, editor of The City Review describes as “from rags to riches and back again.”

Around the turn of the last century, co-ops were starting to become a popular option for the city’s wealthy. Several buildings had cropped up on West 67th Street, and within a few years such buildings were attracting those with sizable incomes by pointing out that apartment living could be just as opulent as home living, but needed half as many servants in order to run smoothly. Still, some were reluctant to make the move from their palatial homes into apartments, due to the class stigma of multiple-family dwellings at the time. Those behind the scenes of the Alwyn Court building thought they could change people’s minds and embarked on a project they billed as “City Homes for Those With Country Houses.”

The architechtural firm of Harde & Short, hired in 1907 by artist William Russell and Alwyn Ball, Jr., were the ones charged with the task of creating such homes. Their plan was to create what was essentially a collection of houses inside one large building, hoping to take away some of the future tenants’ anxiety about this new mode of living. The floor plan details show that the Alwyn Court structure would be 12 feet tall with two apartments per floor, each with 14 rooms and 5 bathrooms. Each unit had its own living room, library and music rooms and wine cellar and the Real Estate Record & Guide reported that with all these amenities, the new building would be a “studio palace” for its tenants. Aside from the actual living quarters, the Alwyn Court boasted gilded lobbies, parquet floors, fireplaces carved in marble, carriage turnabouts, plaster friezes and ornate lighting fixtures throughout.

The interior of Alwyn Court was impressive, but its architects were only getting started.

What most people come away remembering about the Alwyn Court building is the lavish façade that looks out onto its glamorous neighborhood—it is, certainly, one of the most breathtakingly detailed in the city. Gathering inspiration from the style of Francois I, a 16th Century French Renaissance mode of design that re-interpreted traditional French-Gothic forms using new Italian renaissance ornament, Harde & Short pulled out all the stops when designing the exterior of the building. Using glazed terra cotta tiles provided by the Atlantic Terra Cotta Company, one of Staten Island’s largest businesses of the time, the designers carved flowers, plants and animal embellishments into the stone and created something that Architecture magazine considered “of the highest excellence,” curtly prefaced by “if made by a pastry cook.” Indeed, not everyone at the time considered the building to be as magnificent as it is considered today.

“Only five apartments had been taken by the night of March 4, 1910,” according to an article by Christopher Gray (New York Times, April 1997). Unfortunately, before more units could be rented, that evening a fire broke out in the building.

“The fire had started in an unoccupied apartment on the ninth floor, and broken through the window; tongues of fire leapfrogged the blaze to the top,” writes Gray. “Despite its luxury, the Alwyn Court was short on fire protection: with no fire escapes and without fire doors, its single narrow stairway served as a perfect chimney flue.”

Perhaps the media attention to the 1910 fire gave Alwyn Court the attention it needed. After the fire damage was repaired, the building became fully occupied and stayed at capacity through the next decade.

But by the mid-1930’s, the cachet of a Seventh Avenue address was waning and in 1937, the building had become entirely vacant. The murmurings of a Second World War didn’t help matters much, either, but in 1938, Edgar Ellinger of the Dry Dock Savings Institution took over the building with plans to revamp, remodel and redistribute space the spaces within. According to Horsely, “they gutted the building and removed the very large cornice and balustrade. The dastardly remodeling…fortunately did not disturb the rest of the facades, although the entrance was moved from the corner, which became retail space and eventually the very lavish quarters of the Petrossian Restaurant. More dramatically, however, the building’s interior was redone and the number of apartments increased to 75.”

Even with the changes made by Ellinger, The New York Times reported that year that the remodeled building was “the last word in multi-family house luxury.” The units now had 3, 4 or 5 rooms each, since public dining had become en vogue during the war and larger spaces for home entertaining weren’t as popular. Over the next few decades, the Alwyn Court building maintained its tenant numbers and kept its higher-brow reputation through rentals to artists, musicians (Carnegie Hall is only a block away) and other well-known New Yorkers.

According to Gray’s article, it wasn’t until 1980 that the Alwyn Court received any design attention. “The architects Beyer Blinder & Belle supervised a $500,000 façade restoration, cleaning the terra cotta and replacing damaged blocks with cast concrete replicas.” The owners also employed “illusionist” artist Richard Haas to paint a gigantic mural in the courtyard that transformed the interior space into an atrium surrounded by carved stonework. In 1997, the exterior underwent another facelift, this time to restore a portion of the windows and several sections of arches and balconies that were visibly damaged.

Today, the Alwyn Court building enjoys much of the glory originally intended by Russell and Ball, back in the early 1900s. The neighborhood is one of New York City’s most desirable and space in the building isn’t always available.

Dan Danielli is senior vice president of Halstead Management’s East Side office and is somewhat of a celebrity of the New York real estate world. He has sold homes to luminaries like Placido Domingo, George Stephanopoulos and artist Peter Max. It takes a reputation like that to sell space in the Alwyn Court building, and if you’re interested, Danielli has two units he’d be more than happy to show you.

“We currently have one five-room unit that is listed at $1.85 million, and another two-bedroom, two-bath unit listed at $1.67 million,” he says. Because the building is so close to Carnegie Hall and has a history of attracting classical music celebrities, one would wonder if the building is currently home to a variety of artists and musicians. That assumption is valid, but with one caveat — only extremely highly paid artists and musicians can live in this hot slice of real estate. When asked who lives in the Alwyn Court building these days, Danielli puts it plainly: “people with money.”

“Alwyn Court is so appealing because it is a stunning piece of New York architecture. It’s so unique and it’s a recognized New York landmark — how many Woody Allen movies has the Alwyn Court building been seen in?” Danielli continues. “There is no building that looks like this in New York City or really anywhere in the world.”

If you find yourself in the market for the almost $2 million dollar apartment and decide to call up Dan Danielli to put a down payment at Alwyn Court, you need to be aware of the building’s status as a New York City historical landmark and how that status could affect your remodeling plans.

Danielli says that interior changes are not under regulation from the city, and only permission from the building’s co-op board is necessary if you want to remodel. The building’s façade, however, is a different story. “Windows must conform to the look of the building, because no changes to the façade can be made,” says Danielli. Since the façade is what makes the building what it is and gives it the reputation it enjoys, most residents are uninterested in altering it.

Carter B. Horsely says it best when he says: “The Alwyn Court is a confection, a hint of great follies and wonderful imaginations, the promise of fertile creativity—the promise of New York.” And for the right price, maybe you’re the next one to realize that promise, looking out onto the city from your new home at 180 West 58th Street.

Mary Fons is a freelance writer and a frequent contributor to The Cooperator.