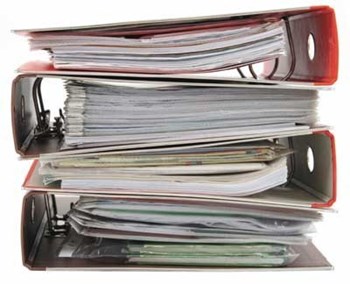 With homeownership comes great responsibility. For co-op and condo residents,  part of that responsibility means sorting through the seemingly mile-high  stacks of documents handed to you before, during and after the purchase process  begins. Those documents can be confusing, especially for first-time buyers.  Becoming familiar with each piece of paper and what it means is an important  part of that responsibility that comes with homeownership, and that knowledge  can save a lot of time and grief down the road.

Start at the Beginning

So what are the main governing documents of co-op and condo buildings? Each has  two primary governing documents. For the co-op, “Those are the by-laws of the cooperative corporation and the proprietary lease  between the corporation and each shareholder,” says attorney Adam Leitman Bailey of the Manhattan-based firm Adam Leitman  Bailey, PC, and author of Finding the Uncommon Deal. “In a condominium, the two primary documents are the condominium declaration and  the by-laws of the condominium. In addition, both co-ops and condos have Rules  and Regulations, sometimes called House Rules.”

The proprietary lease “creates a landlord-tenant relationship between the cooperative and its  shareholders and mostly governs maintenance and repair obligations as well as  other issues affecting apartments such as permitted uses, subletting,  alterations and transfers,” says attorney Stephen M. Lasser a partner at the Manhattan-based law firm of  Barton & Plotkin, LLP. “The bylaws mostly cover issues of corporate governance such as elections and  meetings of the shareholders and board of directors, and the scope of the board’s powers. The bylaws also usually contain some provisions relating to shares and  apartment sales and transfers.” Bylaws in condominiums serve the same purpose.

In a condominium complex, “The declaration is loosely analogous to a co-op’s proprietary lease in that it defines and governs the rights and obligations of  the condominium association and its unit owners relating to the owners’ use of their units and the common areas,” Lasser says. The declaration is recorded with the county clerk’s office in the county where the condo is located. The document is then “incorporated by reference into the unit owners’ deeds,” he adds. “As a result, when a unit owner takes title to his or her unit, he or she is  agreeing to be bound by the terms of the declaration.”

For both co-ops and condominiums, the house rules serve to govern day-to-day  quality of life issues such as prohibited behaviors in common areas and the appropriate usage of the building’s amenities.

There is one main difference to documents that govern co-ops and condos and they  address the major difference between co-ops and condos themselves. “The governing documents of co-ops create a landlord-tenant relationship while  condominium governing documents grant each unit owner title to their individual  unit and a shared ownership interest in the common elements with the other unit  owners,” Lasser says. “This is a significant difference because it gives co-op boards greater powers  and remedies to cure defaults by shareholders, including the power to evict  shareholders from their apartments.”

This is why co-op owners do not receive a deed to their unit as condo owners do  and instead receive a proprietary lease. “A co-op apartment is not real estate,” says attorney Thomas D. Kearns of the law firm of Olshan Grundman Frame  Rosenzweig & Wolosky LLP in Manhattan. “The building is owned by a corporation which issues shares and a lease allocated  to specific apartments.”

“Every shareholder,” adds Bailey, “in the building gets the same lease. A cooperative owner doesn’t really own his or her specific apartment. Each ‘owner’ is really a shareholder of the cooperative corporation and a tenant, pursuant  to the proprietary lease, of their particular apartment. Because they own only  stock in a corporation and do not own any real estate, co-op shareholders’ evidence of ownership is a stock certificate issued by the corporation, not a  deed. A condominium unit owner actually owns the apartment plus a percentage of  the common elements.”

One other document which should be familiar to purchasers of space in new co-op  and condo enterprises is what’s known as an offering plan, a disclosure document filed with the state Attorney  General’s office and issued by the sponsor of either a co-op or a condo before the  sponsor can begin selling apartments. Offering plans “contain representations and obligations” that the sponsor has to do certain things with regard to the building in which  he or she is selling units. “Although many of these obligations are time limited,” says Lasser, “courts will sometimes refer to offering plans to determine whether a sponsor has  fulfilled its obligations or to determine other legal rights even if it is many  years after the first generation of residents have moved into a  newly-constructed building.”

“As long as the sponsor is selling apartments,” Bailey says, “the offering plan must be updated annually. As a building matures, and certainly  after the sponsor no longer owns any apartment, the offering plan becomes less  relevant.” Still, though, it can serve as a valuable reference document. “Certain information, such as the allocation of shares or percentage common  interest to individual apartments, description of the building, special rights  reserved to the sponsor or to certain unit owners, may not be found anyplace  else,” Bailey says.

Knowing What to Look For

As the purchase process progresses, more and more documents will come the buyer’s way, often creating a flood of paperwork that can seem overwhelming. All of  those documents, however, are important and none should be overlooked. “A careful buyer will insist on reviewing the governing documents before signing  a contract,” says Kearns. Most people, he adds, “rely on their attorney to let them know if anything is unusual.”

For some buyers, the chance to see some of these documents can be lost in the  blink of an eye. “A buyer of a co-op who obtains a mortgage will see his or her proprietary lease  for just a fleeting moment,” Kearns says. “The bank takes it immediately as collateral.” Typically, though, the building’s managing agent will be able to supply a copy of all governing documents at no  charge or for a nominal fee later.

Reviewing of all documents is key. “As the general rule in New York continues to be caveat emptor, (i.e. buyer  beware)—a purchaser needs to receive the building’s documents before entering into a contract,” Bailey says. “It is a vital part of the purchaser’s attorney’s due diligence to review these documents.”

While every building and every purchaser’s needs are different, Bailey says some of the key points attorneys will be  looking for include “does the sponsor still control the board? Are there restrictions on leasing or  subletting? What is the sales process? Is there a flip tax, and if so, who pays  it? What is the pet policy? What are the rules for alterations? Are there any  restrictions on use?” These are all questions that are better answered sooner rather than later.

Keeping Up With the Times

Certainly, a co-op or condo building’s documents will be kept on file for years and years, but even the most  well-drawn plans may eventually go out of date. If a board member or managing  agent discovers something has gone amiss in one of the building’s governing documents, they can consult with a professional on next steps.

“The board should consult with their attorney to determine what is legally  required to make the revisions they desire and the best way to obtain  shareholder or unit owner approval,” says Lasser. “Sometimes revisions can be obtained by written consent of the shareholders or  unit owners and sometimes a vote must be taken at a meeting. In any event, an informational meeting with the shareholders or unit owners in  order to explain the proposed revisions will usually greatly increase the  probability that it will be approved by the required percentage of affirmative  votes.”

In most cases, the procedures for amending the documents will be set forth in  the documents themselves, Bailey says. Although each building is different, a  typical procedure for changes to the bylaws or the proprietary lease would be  for a notice to go out to owners describing the proposed change. The notice  would include a date and time for a meeting at which a vote on the change will  take place. The notice also should include a proxy form for those residents who  cannot attend the meeting. A formal vote will then be taken at the meeting and  if the required number of votes is obtained—typically two-thirds of the unit owners, although some buildings require more—then the change is approved.

For other documents, the process may not be as lengthy. “Note that very often, the board has the power to adopt or amend the rules & regulations without the approval of the owners,” Bailey says. “In those situations, the board simply approved the change and then sends notice  of the change to the apartment owners.”

Although the vast number and importance of the documents involved in purchasing  and living in a New York co-op or condo can seem overwhelming, becoming  familiar with each of those documents can bring a comfort level that make that  avalanche of paper feel less daunting. With that, it becomes just a little bit  easier to enjoy that new home in the city, stress-free.

Liz Lent is a freelance writer and teacher and a frequent contributor to The  Cooperator.