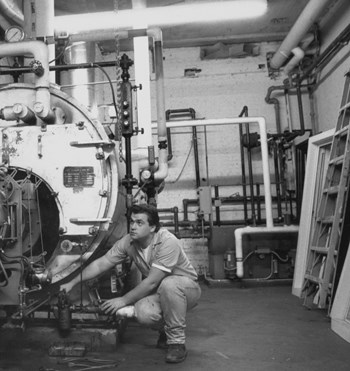 There are worse places to be than New York City in the winter — Minneapolis, for example, or Anchorage. Thanks to the North Atlantic current, the Big Apple doesn’t tend to freeze as hard as some other northern cities, but it still gets darned cold, and if your building suffers from heating problems, darned cold is cold enough. Most managers and board members tend to leave heating issues to their supers or building maintenance staff, but when the pipes are hissing and residents are up in arms and suffering from hypothermia, it can be helpful to understand what the problem is and how it might be fixed.

Even in a small building, producing enough heat to keep everybody comfortable takes quite a bit of fuel. That fuel can be oil, gas, or electric. The vast majority of New York City’s buildings are steam-heated, meaning that oil or gas is  heated in a boiler and, the resultant steam distributed throughout the building.

“Electric heat needs the least maintenance,” says Peter Grech of the New York Superintendents Technical Association (STA). “And with electricity, there are no leaks and no mess. In most cases, problems with electric heat don’t affect the entire building—if something goes wrong, the heat usually goes out in just one apartment at a time. So maintenance-wise, electric heat is a no brainer, but it costs so much to produce, it’s rarely used. Even if you take into consideration the maintenance, leaks and repairs involved with steam heat, electric heat would still cost more.”

And that’s why most of us have big, hulking boilers in our basements. In the most typical New York apartment building setup, fuel—usually oil or natural gas—is ignited in the boiler’s combustion chamber and produces hot gasses, which then pass through metal “fire tubes,” heating water on the other side of the chamber and producing steam. The steam then rises naturally through the building’s heat pipes and risers, into individual radiators, heating them up and making everything cozy.

Burning fossil fuels for heat and hot water comes with its own set of maintenance challenges, however. And as anybody who’s ever shivered through even one January night without heat knows, when there’s a problem with the boiler, it’s a big problem.

More often than not, boiler problems are due to poor maintenance. According to Michael Costelloe of Teitelbaum Inc. in Queens, regular boiler maintenance is the key to minimizing boiler problems. On the off-season, it’s important to have a professional boiler maintenance company come in and do a full cleaning of the tubes and the combustion chamber. It’s also a good idea to do a regular inspection of the burner, and all the instruments and controls on the boiler to make sure they’re all in working order and haven’t been compromised by soot and grime.

“As hot gasses are passing through the tubes, they’re also bringing smoke and soot with them,” adds Costelloe. “The soot accumulates on the inside walls of the tubes and acts as an insulator.”

While most of us think of insulation as a good thing, when it comes to boilers, it’s very much unwanted. An accumulation of sooty insulation reduces the efficiency with which the hot gasses pass through the tubes to heat the surrounding water, forcing the burner to fire more frequently to produce adequate heat, which in turn means that it has to burn more fuel to do its job. According to Dick Koral, who is also with the STA, and the director of New York City Technical College’s Apartment House Institute, “Soot accumulations of as little as 1/32 of an inch will raise your fuel bill by about two percent.”

Multiply that figure by the projected 30 to 50 percent increases in heating fuel costs this winter, and you can quickly see the implications: an overactive burner will be a significant financial drain on your building. So if you haven’t had a full boiler inspection recently, says Koral, do it now.

To be certain that your boiler is working properly throughout the year, Costelloe recommends a major cleaning in the spring or summer and supplemental cleanings—which include vacuuming the tubes as well—once a month during the winter months.

“When we go [into the combustion chamber] and clean it out,” says Costelloe, “it gives the superintendent the opportunity to check the heat-insulating material that lines the chamber, which is usually firebrick or plastic fire clay. Because of the intense heat, the bricks start to break apart over time. Major cleanings allow us to do a visual inspection to see how the brick is doing.”

A common complaint is the sudden, loud, often startling banging and clanging that echoes along steam pipes in the heating season.

First of all, says Costelloe, the pipes leading from the boiler room to the apartments must be well-insulated. If they’re not, “That’s not good for a few reasons: First, you’re losing the heat in the boiler room that should be getting into the apartments. Secondly, as that steam is rising, it’s automatically starting to cool. That means you have a condensation problem before it even gets to the radiators.”

That sounds innocuous, but it sets the stage for all the noise—what’s known in the industry as “water hammer.” When water condenses and isn’t evacuated out of the steam system, it sits in the pipes, says Grech. When hot steam hits the water, there’s a drastic change in temperature and pressure, and droplets of collected water shoot against the sides of the pipes like bullets, resulting in loud bangs, clangs, and pings.

According to Grech, all the racket is more than just a nuisance. “Contrary to the popular opinion,” says Grech, “water hammer is not a normal condition. You can live with it, but over time it’s harmful to the pipes. The solution to the banging depends on what type of system exists in the building, and solving the problem means doing some detective work—does the banging begin at steam start-up, during steam distribution, or at shut-off? The answer can dictate how the underlying insulation problem is approached.”

Another common heating complaint come wintertime is that the building is either too hot or too cold, says Vincent Tolins of Pro-Tech Plumbing in Whitestone. Sometimes, it’s both—everyone’s teeth are chattering on the third floor, while up on six, everybody’s opening their windows because it’s so warm.

“When winter hits, lots of prewar buildings have problems with uneven steam distribution,” Tolins says. “Some apartments will get plenty of steam—maybe even too much—and others won’t get enough.” An engineer can evaluate the situation in your building and inform you how to repair it.

According to Bill Jebaily of Brooklyn’s Aggressive Heating, the solution is often a simple matter of adjusting some equipment. “Your heat timer—which is commonly used in multi-family dwellings—could be out of adjustment. A technician should come in and check the settings and make adjustments to the return-line sensor, the reverse-acting pressure control, or even the weather-head outside the building that senses the temperature and sends the signal to the heat timer itself to switch on or off. There’s a lot more to a heat timer than just that, but those are some key elements to look at.”

Poor heat distribution is the most common cause of high energy bills, adds Koral. If your heating system is working overtime to maintain comfortable temperatures in the apartments that tend to be chilly while the others are overheated, the cost to your building is significant.

“For every one degree that the average temperature in the building is above, say 72 degrees,” Koral warns, “the building’s fuel consumption rises about three percent. If, the overheating is five degrees, your heating bill is about 15 percent higher than it should be.”

The first line of defense is your super and building staff. “Building staff and superintendents should know their system very well,” advises Grech. “They should take courses or workshops to keep up with the latest techniques, equipment and technology.”

And applying a little technology doesn’t hurt either. “It’s easier to detect problems if you have state-of-the-art thermostatic equipment, of course,” says Jebaily. “But older equipment isn’t necessarily bad. If the equipment is working, you don’t have to change it just because it’s old. If you have a piece of equipment that’s giving you problems and being inefficient, however, you must replace it. Given the cost of fuel today, whether it’s natural gas or oil, it’s cost prohibitive to not get the fullest efficiency out of your equipment.”

One option for upgrading your equipment is to install heat-sensing devices on walls in residential units. The small sensors send a steady stream of temperature information to a main computer, which in turn is connected to the boiler/burner system. The computer processes the information and cycles on and off as needed until the average temperature of the sensors reaches a preset comfort level. At that point, the computer instructs the boiler to cycle off. The cycle runs 24/7, maintaining comfortable temperatures throughout the building.

Prices for computerized heating system components start at about $4,500 for the most basic upgrades and go up, depending on the number of options and sensors a building chooses to install. According to some companies, the new boiler monitoring systems can save buildings anywhere from 15 to more than 30 percent on heating costs —potentially paying for itself over the first couple of years.

“The bottom line is this,” says Jebaily, “three years ago, heating oil was under a dollar a gallon. It was easier not to worry about getting peak efficiency out of your equipment. Today, with heating oil in the two-dollar-a-gallon range, it’s much more cost-effective to spend the money on upgrading your equipment to get that efficiency. The payback is much quicker.”

According to Grech, “The most common heating problem is really just lack of knowledge and is lack of money invested in maintaining the system. Once your super or resident manager knows what to do and there is money to do it, there shouldn’t be any huge problems—just minor glitches.”

Michael McDonough is a freelance writer and Hannah Fons is Associate Editor of The Cooperator.