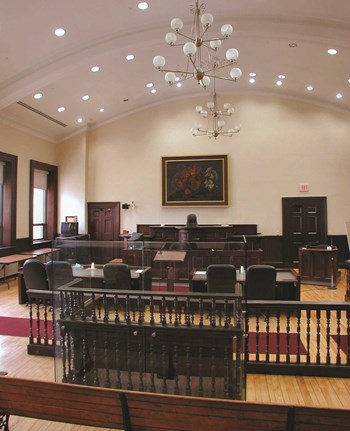 Lawsuits are usually not an association’s go-to method for dispute resolution. Expensive and time-consuming, they can  quickly turn into a financial burden and may create strained relations in the  community. Unfortunately, in some cases there’s no other way out. Last year a couple filed a suit against a neighbor, the  association, individual board members, and property managers who all neglected  to respond to the couple’s complaint of odors infiltrating their unit, the result of 20 cats inhabiting  the neighbor’s unit below.

This may have been an extreme case but most associations will be involved in a  lawsuit at some point, though the length and certainly, price tag may vary. “The variables are how complicated are the causes of action. I could file a  simple complaint but if the defendant hires an attorney and cross claims, it  could get very complicated. It depends on how much discovery is necessary,  depends on how much motion work, if it goes to trial. It's impossible to  predict, really,” says Anne Ward, an attorney at the law firm of Ehrlich, Petriello, Gudin & Plaza in Newark, New Jersey.

Regardless of the cost or type of complaint, there are a few basic points about  lawsuits that all associations should be aware of.

Unless you live in a utopian condo association, lawsuits are bound to happen.  The most common ones include noise complaints between neighbors, construction  defects in units and attempts to collect delinquent payments from residents.  Boards should know what to do if they're the target of litigation. “The first step when a board is sued is they should first immediately reach out  to their attorney,” says Eric Goidel, a partner at the Manhattan-based law firm of Borah,  Goldstein, Altschuler, Nahins & Goidel in Manhattan. “The attorney should reach out to the insurance broker because all co-ops and  condominiums should have general liability insurance and that will cover you  for things like personal injury and property damage issues, and almost all  boards have directors and officers liability, which will cover the actions of  the board taken over the course of representing the interests of the co-op or  condo,” says Goidel.

In the case of maintenance fees, boards have to be strategic in going on the  offensive. “The board has to decide whether they want to take legal action against that  delinquent unit owner. Under the Fair Debt Collection Practices Act, the  attorney or any debt collector is required to send a demand letter, that says  how much is owed, who the creditor is, and they have 30 days to dispute that  amount,” says Ward. “If the debt has not been paid by the 30th day, the association files a  complaint. If it's less than $15,000, and it typically is, I usually file it in  the special civil court as opposed to the criminal court. The process is easier  and quicker. It's very limited discovery, so you get a quick decision,” says Ward.

Surprisingly, most cases are settled before the completion of a trial, says  Ward. “I have filed complaints and it costs a few hundred dollars, and it settles  immediately, and have also filed complaints and they've taken on a life of  their own, and you know, $30,000 later.”

Don’t Go At It Alone

That said, legal experts cannot recount how many times residents, property  managers or even entire boards have tried to immediately resolve the dispute  themselves, ultimately creating more legal challenges. A trap that associations  find themselves in is selective enforcement. “One thing I would say is board members should not do-it-yourself. That's where  they get into trouble. That's where you wind up getting into trouble. Depending  upon who the board members communicate with, there are attorney/client  privileges that might be lost if you try to do it yourself,” says Goidel.

Any lawsuit is public record, so parties involved in a lawsuit don't have to  worry about invasion of privacy, but boards especially should be careful about  how they discuss lawsuits. “If the co-op allows open meetings, at no time should litigation be discussed at  that portion of the meeting. If the board wants to discuss it they should go to  executive session but even then it should just be the basics on where they  stand, not about the facts or legal strategy, that should really be done in  consultation with the attorney or insurance attorney,” says Goidel.

Although lawsuits can take a toll on pocketbooks, associations or boards may be  covered by their general liability insurance or Directors & Officers coverage, respectively. “There's an important distinction between general liability insurance and  directors and officers’ liability insurance, and that is the direct notice to the carrier,” says Goidel. “For example, if someone slips and falls on your property. If you're aware, you  should put your carrier on notice but actually you're not obligated to notify  your carrier until you're actually sued. If you didn't notify them when it  happened or you weren't aware of it, you're not obligated to notify them until  you get sued. In a director and officers’ liability, you're required to notify the carrier at the earliest point where  you reasonably believed a claim might exist.”

In the first phases of a lawsuit, the involvement of the association attorney is  crucial in steering the board or association toward a lawful and appropriate  path to resolution.

Lawsuits are no cheap matter, that’s a given. However, predicting the cost of a suit is difficult. “It depends on the situation. Does the board want to be sued, can they settle it,  are the unit owners nice? A lot of it just really depends on the circumstances,” says David J. Byrne, a partner at the law firm of Herrick, Feinstein LLP with  offices in Manhattan and New Jersey. “The variables would [include] the experience of the lawyer. Although their  hourly rate might be higher, it might ultimately be cheaper because the lawyer  doesn't have to learn a lot of things on the fly. Depends on the diligence of  the board and the management company. If the board or management is lazy, they  would force the lawyer to do more work. Whether the lawsuit requires a lot of  deposition or disclosure, if the facts are in dispute, or if the issue can be  resolved quickly,” says Byrne.

Lawsuits that spiral into expensive and damaging affairs don't happen overnight.  In New Jersey, for example, “Before an association can file a complaint for what's called a housing-related  dispute, they’re supposed to offer them ADR,” says Ward. “As far as I'm concerned the courts are still dealing with this, it doesn't apply  to their obligation to pay maintenance fees. There's no way to dispute that,  the law is just that you have to pay. But let's say the board says, there's a  dog in a unit, they think ADR would be required before you go to litigation,  and that's probably a good common sense way to do it anyway.”

Parties can meet on their own, even without the presence of an attorney, but  recently many residents and associations seek the guidance of mediation  experts, who serve as a kind of neutral buffer and offer constructive methods  to reaching compromise. But if that doesn't work, other methods of resolution  are available. “Arbitration, which is legally binding is also a possibility to avoid some of the  drama of litigation. “Arbitration is quicker, and a little less costly than litigation, and you get  arbitrators who probably have some experience in the field, as opposed to a  judge who just has experience in the law, and has to learn about the field,” says Goidel. “Once the arbitrators decide, it's binding, and there's no right to appeal. We  make the boards understand, 'This is it. This is your bite of the apple. If you  win, you win. If you lose. you lose.'”

The occasional lawsuit will not cripple an association but a long history of  litigation may hurt a community’s standing with prospective buyers and lenders. “Politically in the association and in the building, there could be  ramifications, blowback from the costs of litigation. If insurance companies  are defending the lawsuit, maybe there will be additional premiums. In some  instances, some owners report having difficulty selling homes and finding  buyers that can find mortgages because of ongoing litigation,” says Byrne. Seeing an association deeply indebted by litigation may prompt  prospective buyers to question the association’s financial stability, in addition to its community relations. If there are  constant lawsuits, might the board be ruling ineffectively? Or are there  hostile relations between the board and residents or residents themselves?

But insurance rates and lenders are not the only downsides to a suit-heavy  association. “I have seen several lawsuits that have caused a real deep bitterness among board  members and among unit owners. It depends on how long it drags on, it depends  how expensive it is,” says Ward.

Lawsuits can be an expensive and time-consuming experience for residents and  associations alike. Though pursing mediation prior to filing can produce  cheaper and quicker results, it might not work for all complaints. Should you  find yourself involved in a lawsuit, seek counsel of the association’s attorney, who can help you determine the best legal route to pursue.

Maggie Puniewska is a freelance writer and a frequent contributor to The  Cooperator. Editorial Assistant Tom Lisi contributed to this article.