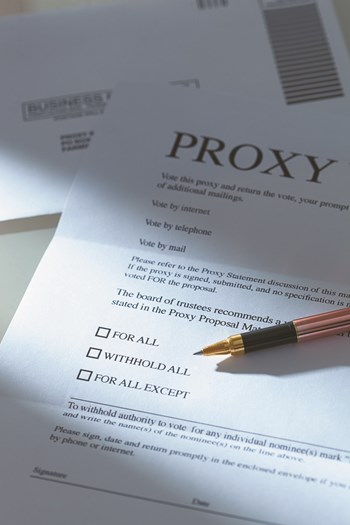 If you live in a condominium, cooperative or HOA, you’re effectively acting as part of a participatory democracy run by an elected group of volunteers. And as with any democracy, those affected by the board’s decisions are encouraged to get involved in the process of governance in order to preserve the best interests of the community, and to prevent power from congregating in the hands of a small group and eventually going unchecked.

But like any democracy, condos, co-ops, and HOAs are imperfect. Some community residents split their time between multiple homes, or rent their units, or are simply too slammed between work and home life to truly get enmeshed in their association’s affairs. For this reason exists the proxy, a written statement by an individual owner or shareholder that authorizes a surrogate to vote on his or her behalf in an association election or referendum. But because a constituent is by definition abdicating authority to another in a proxy vote, the rules governing proxies need to be both well defined and thoroughly understood.  They can vary by association, city or state, and be taken advantage of by unethical individuals.

Before ironing out the dos and don’ts of proxy voting, it helps to fully understand what a proxy is, what purpose it intends to serve, and whether or not such a method is even permitted in an individual association.

“A proxy is essentially an assignment of an owner’s voting right to another person, in order to enable the proxy-holder to vote at a meeting in the absence of that owner,” explains Aaron Shmulewitz, a partner at the law firm of  Belkin Burden Wenig & Goldman, LLP, in New York City. “There are only a few requirements for a proxy to be legally enforceable: it must be written, it must be signed by the owner, and it must be dated. A proxy does not have to be on a specific prescribed form, and many boards and attorneys will accept proxies that are faxed, emailed, or sent via other electronic means.”

According to Scott A. Rosenlund, a shareholder at Illinois-based law firm Fullett Rosenlund Anderson PC, it’s important to distinguish between a proxy and a ballot, as they are meant to serve two separate functions. “I occasionally encounter associations using a form called a ‘proxy/ballot,’ the concept of which is not supported by law in Illinois, where I practice, as proxies and ballots are distinct legal documents, each with a unique purpose,” he says. “Proxies are properly used when there is a two-step process: homeowners who wish to do so collect proxies and bring them to the annual meeting, at which point those proxies are exchanged for paper ballots.”

“The very first thing one should ascertain is whether their bylaws allow the use of proxies,” says Henry Goodman, a principal and co-founder of Goodman, Shapiro & Lombardi, LLC, a law firm with offices in Massachusetts and Rhode Island. “Most bylaws allow them, but there are some documents that remain silent on the issue. If this is the case, or the bylaws explicitly forbid proxy use, then those bylaws ought to be amended, because a proxy is not only a vote, it is an appearance for purposes of determining a quorum. I have attended meetings where a quorum would never have been achieved save for proxies, and where votes would have failed for lack of sufficient percentage, were it not for the inclusion of proxies.”

Sometimes the rules governing proxies depend on the nature of the association. In Florida, for example, “it’s critical when discussing proxies that one distinguish between those used by condos and those used by HOAs,” stresses Keith F. Backer, a partner with Backer Aboud Poliakoff & Foelster, a law firm in Boca Raton. “Our Condo Act expressly prohibits electing directors in a residential condo by-proxy, but the HOA Act does not have such a prohibition. Also, the HOA Act specifically provides that, to be valid, a proxy must be dated; must state the date, time, and place of the meeting for which it was given; and must be signed by the authorized person who executed that proxy. For condos, the statute doesn’t contain much detail about the form of the proxy, but rather requires the form to comport with what the division has established.”

As to who can hold a proxy, there is often little restriction. “It can be another owner in the building, or someone who lives elsewhere — i.e., an attorney — or even a candidate running for the board,” notes Shmulewitz.

The form with which a proxy can take is an issue worth delving into further, as it can help inform both board and resident how best to proceed when entrusting a vote to a third party.

Proxies tend to come in two forms: general and directed. “A general proxy is effectively a ‘blank check,’ which gives the proxy-holder carte blanche discretion to vote however they want to at a meeting,” explains Shmulewitz. “A directed proxy allows the owner to direct the proxy-holder how to vote. For example, the owner may specify which candidate they prefer in an election, or whether they approve or disapprove of a specific issue being voted upon, and the proxy-holder will vote that way. If an owner gives multiple proxies to different proxy-holders, the one that is dated last will govern.”

“Where proxies are permitted, the form and use thereof can be determined by the board, as it conducts the meetings,” adds Goodman. “The board may send out proxies with a designated watermark in order to prevent ballot stuffing. And if a unit is shared by multiple owners, their votes cannot be split. Thus, the board should maintain a list of the person in each unit who is designated to vote. The signatures can then be matched to that list to ensure that the correct person is voting. The board can even direct that proxies will be counted only if they are mailed to a particular person and address by a cutoff date, thus depriving persons from arriving at the meeting with a handful or proxies at the last minute.”

It’s important to review and give due attention to the language in a specific written proxy, such that an owner understands precisely the authority which he or she is giving over. “Some proxies can contain statutorily-required warnings — as in for example when the proxy is intended to waive a reserve requirement,” notes Backer. “Prudent directors and managers make sure their association attorney prepares their proxies to ensure that they are compliant with both governing documents and the law.”

Of course, the more removed a voter is from the actual casting of his or her vote, the more room there is for malfeasance. Thus, an association should assure its owners and shareholders can utilize proxies in good faith, without opening themselves up for undue pressure and corruption.

“There is no ironclad procedure that can provide absolute assurance that proxies will not be subject to tampering,” says Backer. “Like ballots, proxies are always subject to the possible risk of nefarious interference. If an association member believes that they are being unduly influenced by someone who is insisting on being given a proxy, that is a red flag which should cause that member to decline. It is a sad truth, however, that some people care more about getting the proxy solicitor off their doorstep than they do about association issues — in which case they will agree to anything just to get rid of that solicitor.”

“It is true that, when collecting proxies, it is possible that someone going door-to-door misleads or bullies unit owners into signing,” agrees Goodman. “Recently, a complaint was made that a unit owner collecting signatures within a community barged into the unit of some frail upper-octogenarians when they cracked open their door, and refused to leave until they signed a proxy. In such a situation, there are remedies for the owners and the association. Those owners could have filed a complaint with the police for trespassing or potentially harassment [depending on state statutes]. In this case, they were afraid that the individual would retaliate, so they didn’t go so far. But they did complain to the board, which was the right thing to do. The board sent the property manager to their home with an affidavit and, when the proxies were eventually counted, the proxy of their unit was pulled and an announcement was made that it was obtained by fraud and under duress.”

Some associations will allow a reliable outside professional — like a certified public accounting firm — to tabulate its votes during elections. According to Rosenlund: “Having a disinterested, competent professional such as an accountant process the proxies and ballots and calculate the votes helps to maintain the integrity of the process, and can help reassure homeowners that the election is being handled in a fair and accurate manner.”

“To try and minimize the chances of [fraud or other dastardly acts] occurring, some boards engage third-party companies like Honest Ballot Association to handle their voting process, especially in hotly-contested elections,” adds Shmulewitz. “Finally, if an owner feels that they are being pressured or bullied into giving a proxy to a particular person, the best remedy is to ‘just say no.’”