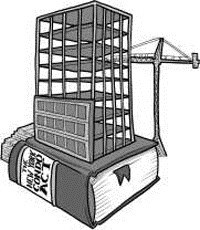 Unlike co-ops, which are governed by the business corporation law and the common law with respect to cooperative housing corporations, condominiums are really a creature of statute. The statute that gives authority to create condominiums is article 9-B of the Real Property Law, which is commonly known as the Condominium Act.

The New York Condo Act is to condominiums what the Business Corporation Law is to co-ops: a set of rules by which the boards and developers must abide in order to run their buildings fairly and legally.

“What the Condo Act does is, in it’s essence, is it sort of comprises the skeleton of what the condominium can be and what the limitations are in what a board can do and what a condominium’s governing documents can and should include,” says Robert Braverman of Braverman & Associates PC in Manhattan.

“It is a framework for the establishment and operation of condominiums in New York State,” adds David Berkey, an attorney with Gallet Dreyer & Berkey, LLP in Manhattan. “It is not a common law type of a creature but one that can only be created pursuant to statute. You have to follow the provisions of the Condo Act and include in the declarations and bylaws those sections that must be required in 339-F and provisions concerning the bylaws are laid out in the act.”

While a lot of what the Condo Act spells out has more impact on new construction than existing condo communities, even the most long-standing New York City condos can benefit from understanding the act and the ways in which it affects them.

What Does it All Mean?

Fairly comprehensive, the act is a mechanism that governs the establishment and the operation and control of an association.

“The Condo Act defines the authority of the board as far as obtaining access to units,” Braverman says. “Making repairs to the common elements, setting common charges. So it’s really the authority by which condominiums are governed. Now, more often than not, on a condo issue you don’t go to the Condo Act but to the bylaws and declaration of the condominium. The act is what sets forth what needs to be included in those documents.”

What happens is that all of the owners in a real property have to submit to agree to submit the property to the provisions of the act and they do that in a document called a declaration. It’s then recorded at the clerk’s office where real property is recorded and the owners of the units who buy units in the condominium are bound by both the act and generally by the provisions and bylaws of the declaration to abide by what the declaration and bylaws say.

There are sections of the Condo Act, for example, which delineate how common interest is determined. There are four or five subdivisions which say you can determine common interest by allocating it evenly, based on square footage alone or it can be based on a combination of factors including square footage, special features of the unit and other subjective factors. (For example: high floors, low floors and views that might be available.)

“Detailed records of receipts and expenditures must be kept by the board and made available to owners,” says Berkey. “A written report must be rendered annually.”

While the Condo Act details a number of things, some of the more important things it says includes the following:

• Renders copies of the declaration, bylaws, floor plans, and any rules and regulations shall be available for inspection in the office of the Board of Managers.

• Details the powers and duties of the board.

• Explains methods to remove the board and elect new people in the positions.

• Describes the operation of the property including the hiring and firing of employees.

• Lists restrictions on the use of property.

Originally enacted in the 1960s, the Condo Act has gone through some changes over the years to keep up with the times.

According to Berkey, “It has changed, not dramatically, but it’s been fine-tuned. There have been some amendments regarding service process on a condominium back in the late ’90s. There was also an amendment that permitted condominium boards to secure financing for the association by collateralizing the cash flow stream of common charges.”

Because the association itself doesn’t own any assets, it has historically been difficult if not impossible for condominiums to borrow money. So whenever there is a capital improvement like a roof replacement that needs to be done, the only way that originally this was able to be accomplished was through an assessment of the members of the association.

In the late ‘90s it was amended to vest the board with the authority to borrow money on behalf of the association by pledging the cash flow of common charges as collateral for the loan.

“It came about because buildings have been around for a long time and they started to get in disrepair so instead of assessing unit owners, they allow associations to borrow,” says Braverman. “They amended the act to allow the collection of rent from tenants or unit owners who are delinquent in payment of common charges—but there haven’t been many.”

Although not many changes occur, every year there is always something under consideration for amending the act.

For residents, the Condo Act is important as it protects them from the board declaring rules that are not looking out for their best interests.

Let’s say there was a portion of a roof that someone wanted to build on, the Condo Act would prohibit the board from selling roof space unless every unit owner consented to that sale. It protects the common interests, it protects the common elements and it sets forth the parameters of what rules and regulations the condo board can oppose.

The Condominium Act is more commonly known as Article 9-B of the Real Property Law, published as volume 49 of McKinney’s Consolidated Laws of New York Annotated (McKinney’s). But unless you work in a law office or are near a specialized law library, this isn’t the easiest document to get a hold of.

According to Braverman, “It’s not something that gets a lot of publicity and the only way to find out or read the act is to look in what’s known as McKinney’s Consolidated Laws, the publication of all of New York State’s statutes. You can Google Article 9-B of New York property law or Condo Act, but it’s not as though there is a publication outside the legal industry where you can find it. If you look at other states, it is in some respect similar to what other states do.”

Berkey’s law firm gives a seminar each year on condo law and included is information on how the Condo Act works. (The next one will be on May 9th). “There’s just not a lot written about it,” Berkey says. “It’s something that’s important that the people who are associated with it should know.”

If the board of managers is not complying with either the Condominium Act or the condominium’s own declaration, bylaws or rules and regulations, a unit owner should point out this lack of compliance, in a tactful way, expressing the expectation that the matter will be corrected. Sometimes this is all that is needed to solve a problem.

“In the Condo Act itself, there really aren’t penalties but you enforce the Condominium Act by obtaining injunctive relief if necessary or when there are financial obligations pursuant to the act, then you can use it to collect,” says Berkey.

The Condo Act requires that unit owners comply strictly with the bylaws, regulations, resolutions, and decisions of the condominium. Failure to do so is grounds for a lawsuit for money due, damages, and/or an injunction by the Board of Managers or by an individual owner.