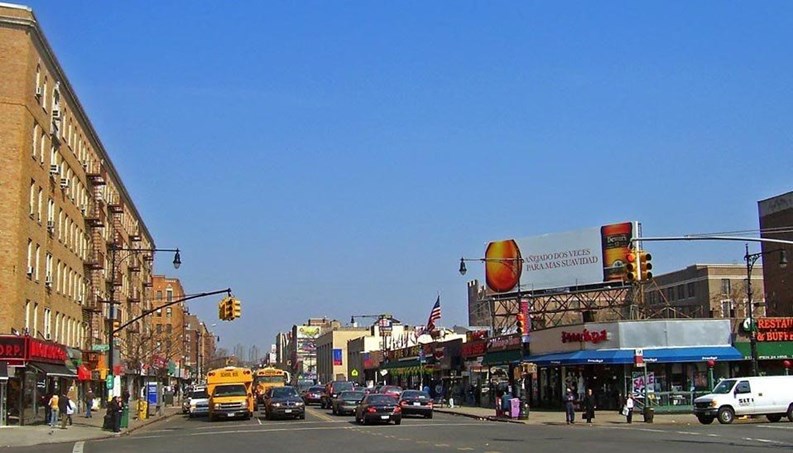 While it remains under the radar, Inwood is a hidden gem that continues to  attract an increasing number of musicians, actors, artists and young  professionals in search of affordable housing and a vibe of being away from New  York City without leaving it.

Inwood is bounded by Harlem River to the north and east, and the Hudson River to  the west and extends southward to Fort Tyron Park and Dyckman Street.

Hark, There is a Forest

Expect to find hiking trails, kayaking, a natural forest (the only one left in  Manhattan) and believe it or not, college football in Inwood. Lawrence A. Wien  Stadium, home to the (historically awful) Columbia University Lions football  team is located in the area. Sports Illustrated named the 17,000-seat Wien  Stadium (The Lion’s Den) one of the most beautiful places in the country to watch a football game,  most likely because of the panoramic view of the Harlem and Hudson rivers and  the New Jersey Palisades that are visible from the bleachers.

Many New Yorkers are turned off by Inwood’s northern location, but the A train is a lot speedier than you might think (a  straight shot from 59th Street to 125th Street shaves more than a few minutes  off) but the median commuter time for residents stands at around 45 minutes.

In 1626, Peter Minuit, the director general of the Dutch colony of New  Netherland famously bought the island of Manhattan from the Lenape Indians for  60 Dutch guilders and legend has it, a few trinkets. A plaque on a rock in Inwood Hill Park marks the spot of the sale.

In the 17th and 18th centuries colonists emigrated from Europe settled and  farmed in the area. During the Revolutionary War, American forces built a  five-sided earthwork fort known as Fort Cox, located between 201st and 204th  streets along Payson Avenue. The fort, which encompassed more than sixty huts,  fell to the British and Hessian troops in November 1776 and was held until  after the war ended in 1783. Once the war ended, families returned to the area  and resumed farming.

In the 1800s, Inwood contained many country homes and philanthropic institutions  like a charity house for women and a free public library. Privileged New  Yorkers like The Straus family (Isidor and Ida Straus lost their lives on the  R.M.S. Titanic’s maiden voyage in 1912) owned R.H. Macy’s Department Store, and maintained country estates in Inwood. The Dyckman Institute would come later. Ad man Peter Campbell on the television  series Mad Men is a descendant of the Dyckman family.

In 1906, the IRT Broadway–Seventh Avenue Line (1 train) arrived in Inwood and numerous apartment buildings  on the east side of Broadway sprang up. Construction continued well into the  1930s, when the IND Eighth Avenue Line (A train) reached Dyckman and 207th  Street, bringing homebuyers along with it.

After World War II, an immigration wave swept through Inwood. Eastern Europeans,  Jews, Greeks and Italians populated the area, moving the neighborhood from  upper class to middle and working class. Residents were mainly of Irish descent  and the area grew up with numerous Irish pubs, eateries and a Gaelic football  field. By the ‘60s, many Irish residents moved out of Inwood into neighboring suburbs,  including Riverdale. By the 1980s, the face of the neighborhood changed once  more as Dominicans settled there.

The attraction for a bit of greenery has led residents and visitors to Inwood  Hill Park, a 190-plus acre park on the Hudson River known for caves that were  used by the Lenape Indians before the Europeans arrived. This expansive  landscape also includes the only natural forest left in Manhattan. Bird  watchers flock to the park to catch sights of water birds, raptors and a wide  variety of migratory birds. The park also contains a ballfield complex, tennis  courts, three playgrounds, a waterfront promenade with nearby canoe and kayak  launch and extensive hiking trails.

Other green spaces include Isham Park, a 20-acre historic park gifted by William  Bradley Isham, a successful leather merchant turned banker. At the park’s southern tip exposed marble outcroppings that date from the Cambrian Period  (over 1.9 million years ago) are visible and have become a popular destination  for college geology classes to visit.

A section of The Cloisters, the branch of The Metropolitan Museum of Art,  devoted to the art and architecture of medieval Europe, is also located in  Inwood.

The fast food joints, 99 cent stores and cheap clothing stores along Dyckman  Street are gone and have been replaced with trendy ethnic restaurants and  lounges like Mamajuana Café, Mama Sushi and Papasito Mexican Grill and Agave Bar, and most recently Uptown  Social, an upscale sports bar. Located nearby is a 200-seat waterfront  restaurant on the Hudson River that features candlelit cocktail tables,  twinkling lights and a beach bar with beds.

There is a mix of public and private housing developments in the area, and one  of the more famous residents lived in the 14-story Dyckman Houses development  as a youth. NBA Hall of Famer Kareem Abdul-Jabbar (formerly Lew Alcindor) grew  up in the seven-building complex and played hoops on its basketball courts.  Other notables include Bess Houdini, wife of magician Harry, lived in Inwood  after his death and Brian Lehrer, a popular radio host on WNYC.

Average prices range for co-ops and condos in the area are in the $300,000 to  $500,000 range with some foreclosure or bank-owned properties on the bargain  side of the market. Rentals range from about $2,000 for a one-bedroom to  upwards of about $3,000 for a two-bedroom, according to Trulia.

While Inwood today remains a Dominican enclave, Hispanic residents make up 74  percent of the population with a small percentage of Irish still calling the  area home.