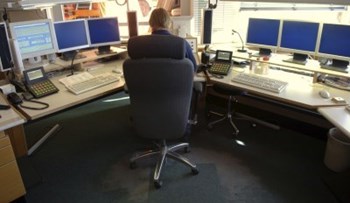 When it comes to living in New York City, having a doorman in your condo or co-op is a luxury that almost everyone wishes they could have. A doorman has many functions, among them providing a sense of security and collecting packages for residents when they aren't home.

A doorman building can be expensive though, and many smaller and mid-sized co-ops and condos can't afford to hire a full-time staff to monitor their entrance all day. Experts say that the cost of providing a 24/7 service runs between $70,000-$100,000 per year because at least three full-time workers are needed, as well as some part time help.

In many of these buildings it's not uncommon to see missed delivery stickers plastered all over the door or signs warning residents not to buzz strangers into the building. But when it comes to the latter, it's hard to feel safe when your neighbors can let anyone in at any time of day.

Luckily, modern technology has begun to offer a few more economical solutions. Many buildings in the city have taken advantage of automated doorman systems, which can replicate some of the doorman's most important functions.

"Having a virtual doorman adds value to a location because they provide a sense of security and more," says Jeffrey Bennett, a principal of R&B Development, which has used video doorman services in several of their New York condo projects. "People are starting to hear about virtual doormen and know what it offers. It gives the projects that much more and makes them more desirable."

A "virtual" doorman basically can acknowledge and respond to a visitor or delivery person 24 hours a day, seven days a week, via an electronic intercom and live video feed that is manned at a central station.

With most of these systems, there is an intercom that is connected to a home base that allows or enables visitors, residents or delivery people to press a button and talk directly to an operator at the remote site.

An example of this would be if a UPS deliveryman buzzes tenant John Doe. Perhaps John's not home or doesn't want to answer; the call is then forwarded to the monitoring center and the request is handled from there. The UPS carrier may then be allowed into the building and guided towards the package room.

"By following the people, no one is going to steal anything," says Colin Foster, vice president of sales and marketing for Virtual Security Service, which produces the trademarked Virtual Doorman. "The systems allow for greater security and safety."

Thanks to the technology that these services offer, a resident will be informed of a delivery immediately by the operators, who can send an e-mail to the resident informing them about the delivery. Most services also keep a log of everyone who comes and goes into the building for the day. This allows the cable guy, locksmiths and service people into the building without needing someone on the staff present to let them in.

Some of the virtual doorman systems also allow residents to submit photographs of regular or future guests to be stored in the system's memory. If one of those people shows up when a tenant isn't home, they will be recognized and may then be allowed into the building.

"Access can be given to people from the remote site," Foster says. "It's something that people may not think about, but it saves so much hassle when you don't need to be home when a friend or family member arrives and they can still get into your building."

It's not only deliveries that the video doormen are used for. They also provide residents with a greater sense of safety and security. Since someone is always there if needed, an operator can help someone coming home late get to their door without the fear or trepidation of having someone follow them.

"It's security with a live interface," says Larry Dolin, president of Manhattan-based American Securities Systems, Inc., which has trademarked the name Video Doorman for their service. "It's not there to be intrusive. If you don't want to be bothered, then don't press the button. But if a young woman is coming back from a date and wants to know that she is safe, the systems can monitor her all the way until she gets inside her door."

Both new condo developments and older ones already in place are finding that the systems are very popular. They are an added amenity that has helped raise sales prices of the homes.

According to Dolin, his company's customer base is comprised of co-ops and condos too small to maintain the cost of a doorman year-round.

"The sweet spot is five to 40 apartments where they don't have the budgets to afford the doormen, but they want the doormen services," he says. "Mostly newer condos being developed add this in. As a matter of fact, it really adds value to a building." Dolin says that developers have told him they are getting 15 percent more for their properties by installing automated doorman technology from the outset.

"We have found that people are familiar with [the video doormen systems] today and it helps in attracting buyers," says Ross Berman, a partner with NY Citiwise LLC, a small development company in Manhattan that uses the Virtual Doorman product in three of their buildings. Citiwise specializes in boutique residential development, including condos with a small number of units where the buyers expect amenities typically associated with large-scale buildings. "We no longer have to pass the extra hundreds or thousand-plus dollars to our buyers to maintain a doorman," says Berman, "but we can still offer them the same, if not better, level of security and attention."

But They Can't Say Good Morning

While it's true that an electronic doorman can't carry out some of the everyday functions of a human doorman, such as helping to carry packages or simply providing a friendly smile each day, the new automated and remote services aren't really designed to replace doormen outright.

"There is no replacement for a doorman," says Mason Wilson, vice president of Mount Vernon-based Apple Intercom and Electronics Inc. which offers a system called Virtual Concierge, "but our research has shown if you had to replace a doorman, the two things you would miss is convenience and security. That's why people are looking into them now. More and more people are seeing them around New York City, and co-ops and condos are inquiring about what's out there."

"It's really for people who never planned on having a doorman—this is an affordable option for them," adds Dolin.

Plus, when the holiday season rolls around, you don't need to tip a virtual doorman—and you don't have to worry about a doorman knowing (and possibly sharing) your business. Virtual systems can offer security while still maintaining the anonymity that you can't get with a human doorman watching every time you come and go.

One major perk of virtual or automated doorman systems is that their operating costs can be up to 90 percent cheaper than a regular doorman. Initial installation and set-up costs run anywhere from a modest $12,500 to $60,000 for a system with all the bells and whistles.

While the building owns the equipment after installation, "There's a subscription [price] on top of that," Foster explains. Those subscription prices vary, but they are much cheaper than the cost of paying a live doorperson. According to the professionals, a ballpark price for virtual doorman monitoring service would be a few hundred dollars a month.

Included in that price is the cost of upkeep and maintenance of the system, meaning that automated doorman systems don't generally require any maintenance from a building's staff. It's usually all part of the monthly subscription, and if something should break, the call centers will know about it right away and dispatch someone to fix the problem.

Of course, nothing is likely to replace the iconic New York City doorman, in his or her crisp uniform, welcoming residents home and keeping an eye on things. But for buildings that find themselves wanting that security but lacking the capital to bring a full-time door staff aboard, going electronic might be a workable compromise.

Amy Saunders on Work Permits:
Aha! I knew it. Thanks a lot for confirming my assumption that legal permissions from the authorities are a must when dealing with a public…
Eve S. on Boards and Transparency:
1. Can a Condo Board Member discuss the issues of the Board meeting with her spouse? 2. Are Condo unit owners entitled to attend Board meet…
Gloria Holloway on Problem Boards:
I live in a gated community and the manager seem to be controlling the Board when the Board is her boss. She fill the vacant board seats wi…
Carolee Doneski on Renting Your Common Areas:
Our clubhouse is free for resident use. HOA fees cover the cost of maintenance. Lately, some of our residents have requested its use for t…
Don DeFranco on Package Security & Storage:
Excellent article. Same storage issues in San Francisco Silicon Valley, but exasperated by the lack of doorman buildings.