Do not show again [X]
By Debra A. Estock   2015 September Neighborhoods 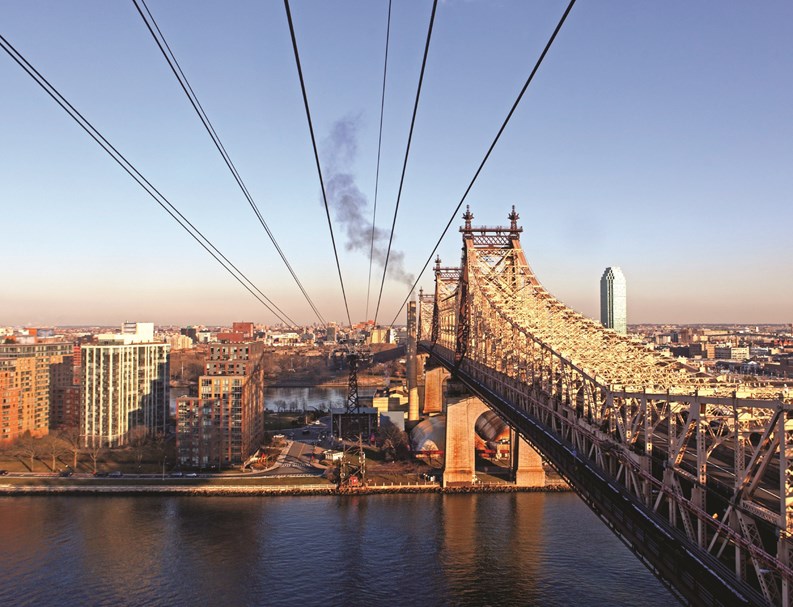 The island recently hosted a campaign and fundraising event for presidential candidate Hillary Clinton which angered some longtime residents but also put the island back on the national radar. Running roughly from East 46th to 85th Streets on Manhattan Island, Roosevelt Island is a 2-mile sliver of land, with a maximum width of 800 feet and a total area of 147 acres. The 2000 U.S. Census offered a population estimate of 9,520, but the Roosevelt Island Operating Corporation (RIOC) estimates that the island’s population now is about 12,000 to 14,000.

The island was called Minnehanonck by the Algonquin Indians and Varckens Eylandt (Hog Island) by the Dutch. During colonial times and later, when the Blackwell family owned it, it became known as Blackwell‍ '​s Island. When it was used principally for hospitals from 1921 to 1971, it was referred to as Welfare Island. It was re-named Roosevelt Island in 1971 in honor of FDR.

Roosevelt Island is owned by the city, but was leased to the state of New York's Urban Development Corporation for 99 years in 1969. Most of the residential buildings on Roosevelt Island are rental buildings. There is also a cooperative (Rivercross) and a series of condominium buildings (Riverwalk). One rental building (Eastwood) has left New York State's Mitchell-Lama Housing Program, though current residents are still protected. Three other buildings are now working toward privatization, including the cooperative.

Although its ownership changed hands several times in the 1600s and 1700s, most people probably associate Roosevelt Island with the charity and smallpox hospitals, prisons and mental health facilities that were housed there for many years. Blackwell Island Penitentiary housed a number of famous and infamous guests in its heyday, including actress Mae West, singer Billie Holiday, politician William “Boss” Tweed, anarchist and socialist activist Emma Goldman and 17-year-old Arthur Flugenheimer (better known as mobster Dutch Schultz), who was incarcerated for burglary.

Besides the penitentiary, the island is famous for housing the New York Lunatic Asylum and the Smallpox Hospital. The asylum was destroyed by fire in 1858 and rebuilt for $150,000 some years later. West was sentenced and served a ten-day jail term on the island for appearing in her play “Sex.” Noted journalist Nellie Bly famously faked mental illness and spent ten days in the insane asylum, which she described as “a human rat-trap. Writer Charles Dickens also spent some time in New York City, visiting Roosevelt Island, where he wrote about deplorable conditions there.

As Blackwell Island came to have a connotation worse than today’s Rikers Island, city officials unveiled a new name after deciding to transform the location into a hospital complex. In 1921, it was christened Welfare Island. In 1935, the penitentiary on Rikers Island opened, and the Welfare Island convicts were moved to Rikers. During this time, the island’s psychiatric facilities were emptied through a widespread process of de-institutionalization. By 1968, Welfare Island was occupied by only two hospitals and a city fire department training center. Then-Mayor John Lindsay organized a committee to explore the future of the island, and a residential community was proposed.

The first phases of residential construction on the island came during the mid-1970s. Northtown, a rental complex arrived on the scene, along with Island House and Westview, market-rate rentals.

Originally called Southtown, the next largest development, are the nine buildings that belong to Related Development and Hudson Cos.’ Riverwalk on Roosevelt Island. Riverwalk is a planned community that, at build-out, will include nine buildings and 2,000 new units of housing, a new central retail commons at the subway station and new recreational facilities for all of the island’s residents. The development team has completed the first seven residential buildings, along with the new Main Street, new ball fields and retail and childcare facilities. In July, Riverwalk Point opened. The 266-unit apartment building is the seventh Riverwalk tower to be built at the foot of the iconic bright apple red tram that takes residents and visitors to the island. Two more buildings are planned bringing the total number of residential buildings on Roosevelt Island to 25.

Other notable developments on the island include The Octagon, a rental apartment complex that retains the original tower from the lunatic asylum hospital that stood on the site. Another construction project is purely academic. Cornell University will use the site of the shuttered hospital to build a 12-acre technology graduate school campus on the island. The island’s residents also need services which have been brought across the river. New retail businesses to Roosevelt Island, include a Starbucks and a Duane Reade, plus a new crop of restaurants. Four new eateries opened with the burgeoning residential construction—Nonno's Focacceria (January 2008), Fuji East (April 2008), Riverwalk Bar & Grill (2009), and Pier NYC (2012) offer a variety of menu choices for Roosevelt Islanders. The FDR Four Freedoms Park was dedicated and opened to the public in 2012.

Family life is also enriched by kid-friendly amenities. A number of playgrounds, parks and sports fields makes Roosevelt Island an ideal place for families. Kids don’t have to cross the river for school, as P.S. 217 and I.S. 217 are on the island. There’s a Little League and a swim team, and children can play all day at the Grandpa Al Lewis Playground. The Munsters’ television actor lived on the island until his death in 2006.

Getting to and from the island is not for the faint of heart or heights. One main method is taking the Roosevelt Island Tramway, the colorful red aerial tram that traverses the East River near 59th Street. There have been incidents over the years where the tram’s mechanicals failed or cars got stuck halfway between its destination leaving passengers dangling like from an amusement park ride. Over 26 million passengers have used the tram since it began operation in 1976. A $25 million renovation project upgraded and modernized the system in March 2010.

A second way is the F subway line. The Roosevelt Island station is one of the deepest stations below sea level in the entire New York City subway system. You can take the Q102 MTA bus or go through RIOC, which operates a bus service called the Red Bus to shuttle residents from the apartment buildings to the subway and the tramway. Cars are still not as prevalent on the island as they are in Manhattan.

So if you’re looking for a quiet oasis away from the hustle and bustle of Manhattan, Roosevelt Island is a hideaway worth considering.