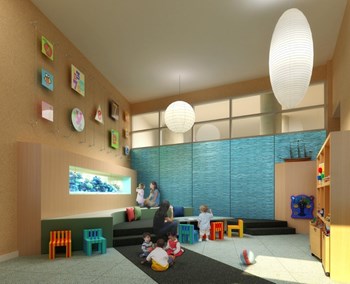 Gone are the days when you could give your kids some coloring books or Legos and expect them to amuse themselves for hours. Nowadays, play spaces and children’s amenities have become crucial aspects in the marketing and sales of New York City’s residential buildings. As new condo construction has boomed in the city, the importance of amenities to sway buyers has taken striking prevalence, for parents and kids alike. If you thought the sauna was fun, get ready for Nintendo Wii.

“As you can see, all around the city now, every building has a huge number of amenities,” explains Lisa Phillips, senior management executive for Penmark Realty Corp. in Manhattan. “They can show you 20 buildings, and every apartment looks exactly the same. So, basically they are trying to lure people in with the amenities.” Buildings have a wide array of offerings, whether it is gyms or private theatres. But for young families, children’s play spaces and programming have become more and more important.

“Children are one of the biggest motivating factors in [people’s] lives— to keep them happy and in a lifestyle that the parents feel they deserve in those types of luxury environments,” says Jacqueline Urgo, president of The Marketing Directors, a Manhattan-based brokerage, which handles marketing and sales for new residential developments.

A shift towards children’s amenities is interesting, particularly when compared to even the recent past, in which, according to Phillips, they were pretty much non-existent.

“Condos didn’t have a separate playroom for children,” Phillips says. “They more or less catered to adults with gyms, maybe a pool. And now they are trying to lure families with these other things.” Much the same way grocery stores stock the brightest and most sugary (and most expensive) cereals on shelves at kids’ eye level, buildings are trying to become more appealing to buyers, by being more appealing to kids.

“I think five or ten years ago you were given a room,” adds Urgo. “[Now] there’s the Wii, there’s new active [programming.] People want to keep their children active…There are new, planned programming for children, whether it’s art classes, cooking classes, interactive social networking for children.”

One building in particular that has taken a shine to kid-friendly programming and features is The Visionaire in Battery Park City. According to Lydia Rapillo, vice president and director of residential marketing for The Albanese Organization in Manhattan, the building will have a 12-foot saltwater aquarium, home to a wide variety of fish and corals. The aquarium will do double-duty as an “accent for the lobby and playroom,” while also serving as an educational piece for the children of the building as the staging point for lectures about marine life.

In addition, the condo has brought in Wellness 360, a private amenities consultant to design a “unique curriculum with a full menu of services that include intellectual, cultural, and recreational activities” for kids. Obviously, there is some clear marketing going on in that statement, but Wellness 360 will be on board with the building, involved with programming, in addition to inspecting and maintaining on-site equipment.

Clearly, the level and variety of amenities being developed for children is impressive. Buildings with pools offer swimming lessons (even for babies), and there are music classes, dance classes, language lessons. But for parents looking to purchase a unit in a new luxury building, who wouldn’t want these kinds of perks for their children?

In a city as big as New York, having enriching and safe activities for kids, essentially in the home, to keep them occupied, active, and learning, is certainly much better than putting them in front of the TV with a bunch of junk food. But the question remains: why now?

Buildings rife with children’s amenities are a relatively new phenomenon. The rising importance of which, as Urgo suggests, may be related to a shift in where young families are settling.

City Instead of Suburb

“Because of the attraction back to the urban centers, people are selling homes in the suburbs and coming back to Manhattan to raise their families,” she says. “And, as you see the mix of buildings go from smaller-sized [apartments] to two, three, four, even five-bedroom family-sized residents, you have to put the amenities that appeal to those family audiences within the building.”

“When you’re leaving a house in the suburbs, a lot of the reason people move to the suburbs is to have that backyard play space for children,” Urgo continues. “So now, these urban environments are creating ‘backyard’ [spaces] for the same type of lifestyle use.”

By providing communal play spaces in buildings, children can have a place to play and interact socially with other kids, which is outside of their apartments, but still within a relative comfort zone. If you are a parent who doesn’t like stepping on a pile of matchbox cars en route to your morning coffee, a play space can help keep toys somewhat contained. If you don’t want to have to tidy up your apartment every time little Kevin has a new friend over, you can take them down to the playroom and let them play all they want.

As Phillips points out, some parents like having a children’s play space in their building, “because the children can have a play date downstairs, mess up the room, and keep their apartment neat.”

In addition, playrooms and children’s programming allows kids to have a “communal play date where they meet their neighbors,” allowing them to “have friends within their building vs. just their school structure. So it increases their social network of playmates,” says Urgo.

According to Urgo, children’s amenities, in buildings that have them, tend to get more use than some of the other, more exotic amenities available in newer buildings—even gyms and media rooms. Kids are extremely active and are never, for better or worse, going to get tired of playing.

Whether children’s amenities are here to stay or a marketing trend with a sell-by date remains to be seen, however. The volatile housing market in the rest of the country doesn’t seem to have rattled prices and amenity and service offerings in Manhattan too much yet, but that could change. If it does, it will be interesting to see if luxury amenities like playrooms and childcare facilities become even more in-demand, or if developers shelve plans for such offerings in order to trim pressured budgets. As with just about every other aspect of the New York real estate market, only time will tell.

Sam Nixon is a freelance writer and project manager living in Brooklyn. 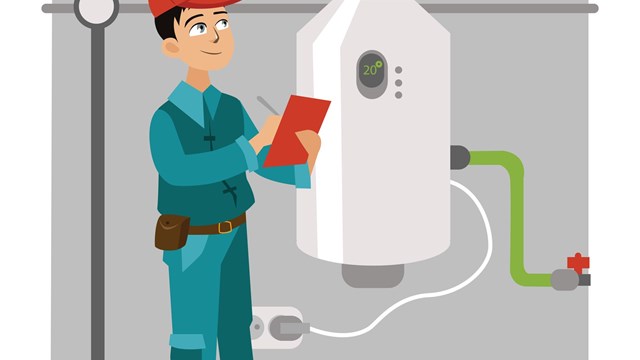