Do not show again [X]
By Brendan Flaherty   2008 June Neighborhoods 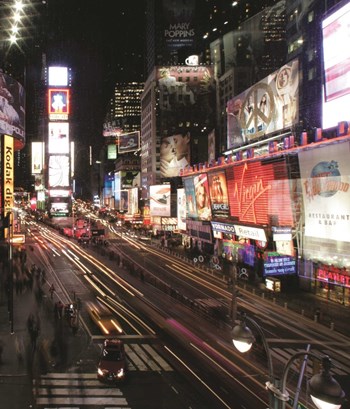 The heart of New York City is Times Square. Named for the good times you have when you are…in it,” says Michael Scott in the NBC comedy, The Office. He then heads into Sbarro for a ‘real’ New York slice.

Although Times Square is actually named for the former offices of The New York Times, the Times Building located at One Times Square where the legendary Waterford crystal ball drops every New Year’s Eve, The Office does tongue-in-cheeky touch on many New Yorkers’ perceptions of the neighborhood. That it is commercialized, a hodge podge of misplaced chain restaurants and stores, and somehow “inauthentic” to New York. For many, Times Square represents a “Disneyified” version of New York City, packed with tourists, gawkers and dawdlers, too entranced with the neon advertising to realize that they are blocking the sprint-step walking pace of a New Yorker en route to work or a promising street hot dog. To others, the memories of decades of crime and seediness preceding the 1990s still linger; casting a shadow over the area nicknamed “The Crossroads of the World.”

Despite these negative perceptions, however, Times Square is a dynamic and rapidly developing area, inhabited by more than the Naked Cowboy and the “I Love New York” tank-topped tourists that come, fanny packs stuffed with cameras, to see him. In recent years, the neighborhood has seen unprecedented development and revitalization, with much more on the horizon for the neighborhood and its surrounding areas.

In recent years, “there has been a big increase in the amount of residential development,” says Ellen Goldstein, vice president of policy planning & design for the Times Square Alliance, which according to the Alliance’s website, seeks to “improve and promote Times Square.” Goldstein continues, “There’s been a few new buildings within our district, particularly with some things being developed on Eighth Avenue. And there has been a lot of development west of our district in the Clinton area.”

Times Square is centered on the intersection of Broadway and Seventh Avenue, and the area stretches between West 53rd Street and West 40th Street, and east to west from Sixth to Eighth Avenue. But as the area expands, the traditional dividing lines of the Times Square neighborhood have done little to contain its growth.

With Times Square already pretty heavily built up, most residential development is taking place in neighboring areas, but in recent years, there has been some residential development in the neighborhood, including 1600 Broadway and The Biltmore, which features 464 units at West 47th Street and Seventh Avenue. 1600 Broadway, smack in the middle of Times Square, and criticized by some for its views blocked by billboards, was a highly sought-after building with amenities such as a golf putting green and virtual driving range. Its 136 units were selling for much higher than anticipated, and the building was a tangible indicator of the reinvigorated desirability of Times Square, which according to the Times Square Alliance website, boasts 33,360 households.

Clinton, also known as Hell’s Kitchen, has seen significant residential development in the past few years, and this boom has certainly been facilitated by development in neighboring Times Square. The revitalization of the iconic neighborhood certainly has far-reaching effects in the city, and as Goldstein points out,

“There was really a sea change after the redevelopment of 42nd Street that really took off in the early ‘90s and sort of flowed north.” The first and one of the largest steps in revitalizing Times Square was the cleaning up of 42nd Street, which had been considered a dangerous area, known more for its adult entertainment than its Broadway musicals.

Carter B. Horsley, editor of CityRealty.com and TheCityReview.com, who also worked in Times Square for The New York Times for twenty-six years, recalls the sixties and seventies as dangerous times when muggings seemed to be par for the course. Now, “there’s Times Square and the surrounding theatre district, which is one thing, which I think anyone would be hard pressed…to find too much wrong with,” he says.

In 1990, the state and city of New York assumed ownership of several of the historic theatres on 42nd Street, which had become rundown from a former heyday. One of the theatres was the New Amsterdam Theatre, which was later leased to Disney in a “symbolic” step in the revitalization of the area.

The revitalization was further bolstered by the relocation of several large financial, publishing, and media corporations.

“That really changed the profile of the area. We had what had largely been an entertainment district, very quickly, over the space of less than 10 years became a central business district,” says Goldstein. One of the major corporate headquarters to relocate was Conde Nast, whose building at 4 Times Square is considered one of the most important examples of “green” skyscrapers in the country.

“Our primary identification is still probably entertainment for most people, and certainly theatre, which has also been here and is singular for us. But I think we are also definitely thought of as a central business district. We’ve got headquarters of [virtually] every major media company in Times Square now. And we have a huge banking and finance presence, as well,” says Goldstein.

Naturally, when an area changes, so too will its demographics, and in 2004, the Times Square Alliance conducted a study to discover the residential makeup of the area. What they discovered, according to Goldstein, is that the people moving into the Times Square area were a significantly younger bunch, 20–39 year olds, than its primary residents, with a higher median household income than that age group in the rest of Manhattan. Goldstein attributes the move of a younger demographic with more disposable income, in part, to the relocation of various corporate headquarters, and also to the construction of more new housing in a safer neighborhood. “As this area became safer, it kind of pushed the limits west of here, both in the Clinton area, and then south in the Hudson Yards development,” says Goldstein.

Although things look promising for the continued development of the area, with an already congested city and a down economy, the development of areas affected directly by Times Square does bring about new obstacles.

“The real big question is what’s happening further west on 42nd Street and in Hudson Yards to the south, which is a state of disarray in terms of planning at the moment,” says Horsley. To the west, there is extensive development, including the building of the second part of Silverstein Properties’ “enormous rental building between 11th and 12th avenues;” construction of a second phase of the Atelier; and lease plan for a tower over the Port Authority Bus terminal, among other things. “In other words,” says Horsley, “42nd Street, river to river, is pretty much” completely saturated with high rises.

In the vicinity of the Javits Center and Moynihan Station, (a 9-year-old cost-behemoth of a project to rebuild Penn Station) “The mayor pushed through, rather discreetly, an enormous rezoning of the area…south of 42nd street down to 34th street.” The purpose of this rezoning, Horsley says, is to allow for the creation of a new diagonal boulevard in between 10th and 11th avenues, where millions of square feet of new office space and thousands of new apartments and hotel rooms could be built. Presumably, the purpose is to solidify the area around the Javits Convention Center, but “they’ve run out of money for an expansion of the Convention Center, and those plans that they had were ill-conceived.” Horsley adds, “We’re not really sure what’s going to happen, it’s hard to believe that nothing will happen. But at the moment, it’s a fiasco that’s probably the greatest in the city’s history in terms of planning.”

On the other hand, the new development plans would offer more jobs and places to live for New Yorkers, in addition to generating more funding for the city through real estate and income taxes.

Esther Muller, co-founder of the Real Estate Academy for Continuing Education and a New York City broker for over 25 years, mentions that new development would hopefully bring more affordable housing into Manhattan.

“I would love to see affordable housing. I would love to see the city really pay attention in that area. We’ve got tremendous amount of teachers and people in healthcare…and people who take care of the city and cannot afford to live here.” Muller also notes that currently prices for a unit in a new Times Square development is roughly $1,100-$1,200 per square foot.

Clearly, in comparison to even a decade ago, there has been significant change and revitalization in Times Square, with hopes and plans for much more. Goldstein mentions goals of making Times Square a “more authentic and more New York neighborhood.” By any standard, the neighborhood is internationally renown, but the work continues towards even further improvement. Goldstein says that generally tourists are very happy with their visits to Times Square, but the Times Square Alliance is also working towards improving the area for the people that work and live in the area, as well.

“One of the major initiatives we are working on is trying to attract…unique, locally-based retailers throughout New York, in Manhattan and Brooklyn, to see if they would be interested in locating along Eighth Avenue, which we identified as a retail corridor.” Eighth Avenue, should “present more opportunities as these new buildings come in and empty space opens…In the next 3-5 years, [our goals is] get a more diverse and interesting mix of retailers. So, they’ll be serving the people that work here, but they’ll also be serving the people that move in west of here.” The goals and efforts of the Alliance demonstrate the expanding scope of the Times Square neighborhood.

All in all, says Horsley, Times Square is “safer, slightly more antiseptic; but still there is so much pedestrian traffic and tourists and theatre goers that there is no question that it is definitely still the ‘Crossroads of the World.’”

Brendan J. Flaherty is an associate editor of The Cooperator.