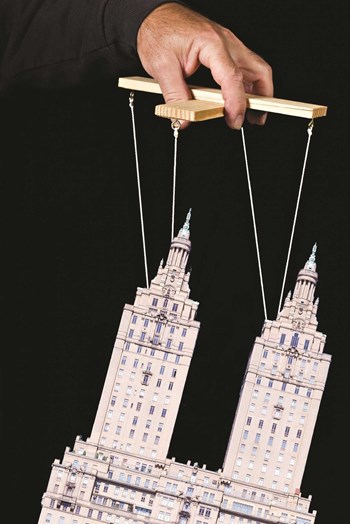 The goal of any property developer is to sell units, but until that objective is reached they have to assume all the day-to-day responsibilities to ensure smooth operations and continued sales. This requires wearing many hats—manager, board member and ombudsmen. As a result, it’s often a relief when the control of the property is transitioned to members of the board or association. However, this isn’t always the smoothest of processes.

“Every building is unique and we strive to make sure that a new board has the ability to properly operate its building in a relatively short period of time,” says Attorney David Berkey, a partner at the Manhattan-based law firm of Gallet Dreyer & Berkey, LLP.

Attorney Jeffrey Schwartz, a partner with the law firm of Wolf Haldenstein Adler Freeman & Herz, LLP in Manhattan, explains that developers and boards can look to Attorney General-drafted laws to ease transitions issues. For example, Part 20 of Title 13 NYCRR of the Regulations Governing Newly Constructed, Vacant and Non-Residential Condominiums and Section 352-e of New York’s General Business Law govern, specifically aid in the turnover of the property. “These laws are embodied in the offering plan and bylaws of the condominium,” says Schwartz. “They generally relate to when and how the turnover should be effectuated.”

When asked what the major challenges facing developers before transition, Schwartz offered the following common examples:

• The ability to continue and complete construction of units.

• The ability to continue and complete construction of the common areas including amenities.

• The effect of individual unit owner DOB applications on the ability to obtain the final CO.

• The desire of owners to change or enlarge services for the condominium.

• The interplay between developers desire to keep costs down so common charges do not increase.

Schwartz says the major challenges facing new boards are as follows, include getting developers to fix construction issues; making sure that the building’s temporary certificate of occupancy is renewed on a timely basis until the final CO is obtained; obtaining the final CO; finalizing any tax abatement applications so abatement commences promptly after the first closing; and remembering the inherent conflict sponsors have as board members and developers.

Before the transition is accomplished, all the aforementioned responsibilities remain with the developer. This is not always a coveted or sought after role. “Developers have to be very careful about their fiduciary duty to unit owners and shareholders while they maintain the majority of seats on a board,” says Attorney Thomas Kearns, a partner with the New York City law firm of Olshan Frome Wolosky, LLP. “The smart developers lose sleep over that issue. The truth is, except for a few key issues, the developer would much prefer not to run the day-to-day operations.”

While it’s commonplace for developers to hire management companies to oversee the building or property prior to transition, there are often related issues that can impact the unit owners and board members once the baton is passed.

“We are often asked to represent condominium boards of managers that have recently taken control of a newly built or rehabilitated condominium building from the developer/sponsor,” says Berkey. “Developers like to keep control, so it’s a challenge to stay in control while being obligated to give up control,” he says, adding that often transitions are a “political process.”

The reality of developers acting as property managers has changed over the years, say the pros. For example, when condominiums were first established, it was extremely common for a building developer to also manage the property, sometimes entering into very long-term contracts with itself—sometimes for up to as many as 99 years. This locked future unit owners into using the developer's services.

The rise of management companies has made such relationships relatively rare however. As a result of the expansive growth of the property management industry, more and more developers happily subcontract duties to third parties, while the details of the transition are ironed out. However, this arrangement can cause issues.

“While the developer remains in control the resident owners are often frustrated by lack of progress on quality of life issues,” says Kearns. “The developer designees just don’t have the time or inclination to be very proactive.”

Kearns relates a recent example of a transition process that was going awry. Resident members of one property hired him to review their desire to take over control of the property citing various reasons and concerns. For example, they believed the developer/sponsor was reluctant to give up control voluntarily since it was still in the process of obtaining the final certificate of occupancy.

“I suggested that I reach out to the developer’s counsel and ask them to give up control while agreeing to permit access and to sign any documents required to get the final certificate of occupancy,” Kearns continues. “The sponsor agreed immediately—in fact, I think they were relieved. They got rid of the headaches of board control while having a written agreement about what was important to them.”

While the Attorney General has set forth precedents as to when a developer can start the transition process, 11 years ago a significant court decision—commonly known as the Jennifer Realty Case—was reached that affected co-op and condo owners. In brief, the New York State Court of Appeals issued a ruling between 511 W 232 Owners Corp v. Jennifer Realty Corp. The court deemed that offering plans were a contract. This meant that sponsors had to “act in good faith and timely sell at the very least enough shares to create a fully viable cooperative.” Further, the Court ruled that by keeping a majority of shares in a cooperative, a sponsor defeats the purpose of respective contracts.

“The decision had some effect, but it was not conclusive.” says Schwartz. “It did not place an absolute burden on sponsors to sell as opposed to renting. It intimated that sponsors must sell at least 50 percent of the units but most sponsors have done that. Where things are still tricky is where sponsors still own less than 50 percent and continue to rent rather than sell because cash flow is so good. The Jennifer case did not really help co-ops here.”

Kearns agrees with Schwartz’s stance but offers the following: “It’s critically important in certain limited areas—developers can no longer just unilaterally decide to sit with unsold units. But in most cases, the developer doesn’t want to do that anyway—and the law is still flexible enough that with the right offering plan disclosure, developers can refuse to sell for certain periods.”

When it comes to a developer-board transition, no process is exactly alike. As a result, there isn’t always a clean break. In some cases, new boards are required to deal with the developer after the 'transition' has occurred, which means the developer has continued involvement in the community’s administration.

“We assist the new boards in selecting independent accountants to perform any required audits and review of the bylaws, declaration and rules to assure that the board has the power needed to properly manage its property,” says Berkey. “If there is a management transition, we assist the board and new management in obtaining the records (financial and otherwise) from the former managing agent.”

Schwartz explains that the offering plan sets forth who the developer’s designees will be for that first board. “The plan then provides that a unit owner’s meeting must be called between 30 to180 days after first closing at which time a new board is elected,” he says. “The non-sponsor members are elected by owners and the sponsor designates its members.”

Even when a new board has majority control of the property, they must formulate policies in conjunction with laws on the voting and the management of the collective, which could include dealing with one or more developer-appointed members.

“This really depends on the board. While the sponsor is in control, typically it dictates,” says Schwartz. “If there are issues that arise that present conflicts for sponsors it should abstain from voting on those issues.” Kearns adds. “Many times the developer will defer to the resident owners on paint colors or doorman hours or similar operational issues. There needs to be good communication.”

In many cases, the majority of an association’s rules and covenants are in place long before a single unit owner has purchased their home. This is stated in the declaration of condominium, bylaws, articles and rules and regulations filed by the developer on behalf of the association. Regardless if a developer remains involved after turnover of majority control, most new boards, should concern themselves with specific adjustments to the rules that are raised by events that occur on the property.

“Where possible, we make sure that the new board has assigned to it all construction warranties and that the building contractors live up to their contract obligations with the developer/sponsor,” says Berkey. “In some cases, we seek the intervention of the Attorney General’s office to assist the new board in receiving the amenities promised in the offering plan. If necessary, we are prepared to litigate our new board’s claims.”

Berkey adds that certain buildings, even those newly constructed or rehabilitated, are not well built and often have construction problems. As a result, he recommends boards conferring with industry professionals, such as architects or engineers to assist in dealing with related problems.

The good news for boards is that after transition, despite the possibility of the developer presence, the board holds the majority vote to make decisions that will best serve the community. It is at this stage that the board should build its roster of professionals to ensure that no snafus happen.

“The lesson for all new boards is to take your role seriously, obtain and review all important documents fairly quickly and employ a good management and professional team to assist in resolving any problems you may face,” says Berkey.