Do not show again [X]
By Lisa Iannucci   2015 October Maintenance 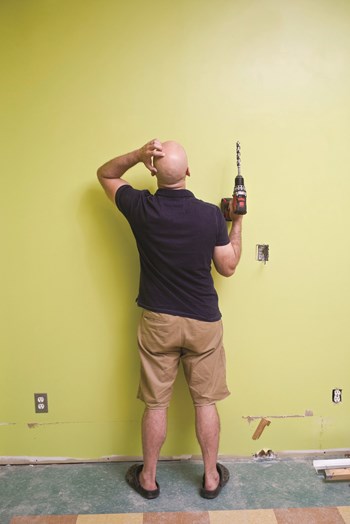 Every year, like clockwork, Wayne Bellet, owner of Bellet Construction in Manhattan, says that he gets multiple requests for his company to scrape, prime and paint metal fire escapes.

“It’s silly, because it’s so easy to do, and building managers and boards have staff that can do it,” says Bellet, whose company actually specializes in sealing buildings from water penetration. “If I charge $600 per fire escape and your building has 20 of them, doing the work in-house can really save money. All it takes is some personal protective equipment, such as masks and goggles, and a hand scraper.”

With many buildings and HOAs struggling to get out from under post-recession economic burdens, some boards and managers may be tempted to use in-house staff members to do certain maintenance and repair tasks around the property even if it's not necessarily in the staff’s job description, or if the job in question is maybe a bit more high-stakes than changing a light bulb or giving the lobby a fresh coat of paint. Sometimes it’s perfectly fine—not to mention cost-effective—to hand off a job to a staff member. On the other hand, there are some jobs that should definitely be left to the professionals.

“I am definitely in favor of using staff for doing work that outside contractors would do,” says Steven Gold, president of Hudson View Associates, Inc., a management firm in Manhattan. “I find the most economical and best way to use them is for plastering and painting jobs, but it all depends on what capabilities your staff has. Fortunately, the board or management company can select the people they are hiring and hire for the work that you know your building needs.”

Gold says that these three areas of concentration are plastering and painting, plumbing and electrical. “It’s good to have someone who knows plumbing on your staff in case of a pipe leak in a unit,” says Gold. “The shareholder won’t spend the money, but then before you know it, it’s leaking to the person below and wasting water in the building. If you don’t have someone fix it, it will cost the building money, and the water charges will be higher. If you already have someone on your property who can take a look at it, you don’t have to hire a licensed plumber.: But, Gold cautions, “you do need a licensed plumber for anything more than a leak.”

When it comes to electrical jobs, there are limits to what your staff can do, says Gold, because of New York City codes. “Electricians who aren’t licensed can’t work inside the walls.”

Saving money might seem like a great reason to add to your staff’s to-do list, but there are some other factors to keep in mind too, including the amount of time a job may take a staff member away from his or her regular duties. “You may want to throw your staff more maintenance jobs, but they have other responsibilities too,” says Gold. “Think about how much time it will take. If the job is going to take more than a few days, you might want to hire it out, because that staff member might be needed on other jobs in the building.”

There are some maintenance jobs, however, that Gold says he would always hire out to a professional. “For example,” he says, “I would always hire a professional landscaper. Landscapers know what different species of plants need, and how watering needs to be done so the plants don't die. Also, when it comes to major interior decorating projects, it’s important to bring in a designer because you need to maintain the image of the building. And finally, beyond a little patch job, roofing problems should always be done by an outside contractor.”

But what if John Smith who lives in apartment 2B and happens to be a licensed master electrician gets wind that you need help and volunteers to do a wiring job for pennies on the dollar? Marc Supcoff, founding partner of the Law Offices of Marc H. Supcoff in Manhattan, says that it’s best to say thanks but no thanks to such offers. “Hiring a resident in the building to do a maintenance job might not be legal,” he says. “First, there cannot be any conflict of interest by the board member who is assigning the contract. For example, the contractor cannot be a close friend of someone on the board. Also, you need to check the bylaws to make sure they don’t prohibit you from contracting with a shareholder or unit owner.”

Even if there isn’t a conflict of interest or a bylaw that’s stopping it, Supcoff says that he would still not recommend hiring a resident or shareholder for any kind of maintenance work at any time. “Construction contracting is very complicated, and comes with thorny liability issues,” he says. “Contractors must come with liability insurance, worker’s compensation, and indemnification of damage to the building. Those protections are less likely to be in place or available if the building contracts with a resident. There could be a real liability issue if the property is damaged or someone gets hurt and the resident doesn't have the necessary insurance.”

However Eric Goidel, senior partner of Manhattan-based law firm of Borah, Goldstein, Altschuler, Nahins & Goidel, P.C., says that it’s different if the resident is just offering to get a better deal on a product. “I had one shareholder in the building supply business who was able to get the building a lower price on garbage bags,” he says. “Garbage bags are garbage bags. There is no issue of workmanship, but if they are on the board, they shouldn’t be involved with the bidding process, discussions or voting process. Generally if you can avoid it, you are better off.”

Unfortunately, hiring a resident or shareholder doesn’t mean that the job is going to come out right and, if it doesn’t, there may be ramifications. “If you, or the other residents, don’t like the way the job came out, the resident who did the work is going to be in an awkward situation because they live in the building,” says Goidel.

But then what? “You have the same recourse against an individual as you would have if you hired an outside contractor but you need to be careful, because what if you didn’t sign a contract with the individual and they move?  The work also isn’t as enforceable as a warranty with a company.”

If someone in the building works for an elevator company, they may say that they can do the work because that elevator company has insurance. Again, say thanks but no thanks. “The person volunteers to do the work, but is that person able to deliver the insurance?” says Goidel. “Also, if you have existing warranties—on the roof, for example—you need know if that warranty would be voided if a resident worked on the roof. An individual cannot deliver their company’s insurance if they are doing the work as a side job. It would be costly, and the savings from hiring that person to begin with would go out the window.”

When making a final decision, Goidel says to use the Business Judgment Rule. “It might save the building money, but it might not be in the best interest of the corporation,” he says.

Bellet also knows that he’s also going to get requests to do such minor projects as caulking. “Me and my $2 tube of caulk are going to do the job for 10 times what you are paying your building staff, so consider the job before you call,” he says.

Bellet has a compromise though, if management and the board are really stuck for some maintenance help. “Depending on the job, call us or any of your valued vendors, and we’ll teach your staff,” he says. “It’s worthwhile, because once you teach them, they can do the work on their own and we can lend supervision.” However, he still expects that you’ll hire out the big jobs, such as a roof repair, and pick his brain while he’s there on other smaller jobs.

So before you assign a maintenance job to a staff member or call a professional for an estimate to come in and complete it, consider what type of maintenance job it is, how much time it will cost, your budget and, of course, your staff’s skill level. In the long run, saving a few bucks may end up costing the building so much more.