Do not show again [X]
By Liam Cusack   2011 July Neighborhoods 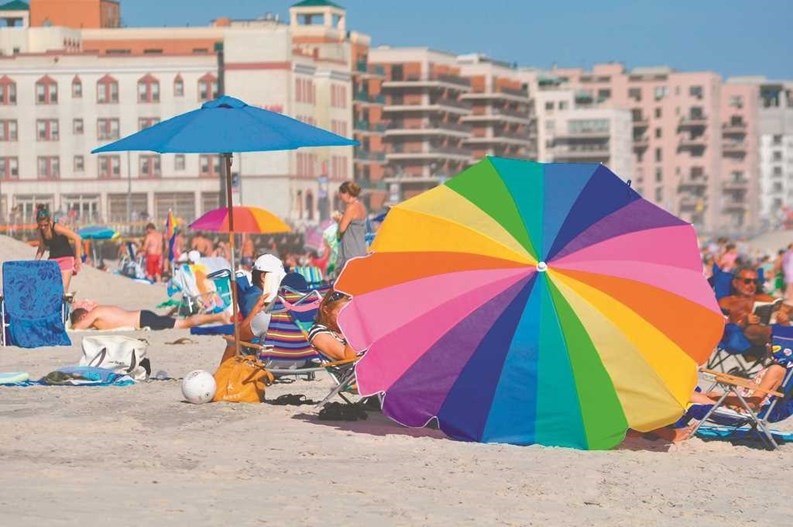 Imagine a quiet oceanfront community with powdery, white sand beaches, wonderful  restaurants, a thriving cultural scene, and all of this less than an hour away  from Midtown New York City. Look no further than Long Beach.

Long Beach is a city in Nassau County located on a namesake island, which forms  part of the Outer Barrier off Long Island's South Shore. The city is surrounded  by Reynolds Channel to the north, east and west, and the Atlantic Ocean to the  south..

Long Beach's first inhabitants were the Algonquian-speaking Rockaway Indians,  who sold the area to English colonists in 1643. While the barrier island was  used by baymen and farmers, no one lived there year-round for more than two  centuries. In 1849 Congress established a lifesaving station after 62 people  perished when the barque Mexico, carrying Irish immigrants to New York, ran  ashore on New Year's Day.

Austin Corbin, a builder from Brooklyn, was first to attempt to develop the  island as a resort. He formed a partnership with the Long Island Rail Road  (LIRR) to finance the New York and Long Beach Railroad Co., which laid track  from Lynbrook to Long Beach in 1880. That same year, Corbin opened Long Beach  Hotel, a row of 27 cottages along an 1,100-foot strip of beach, which he  claimed as the world's largest hotel. In its first season, the railroad brought  300,000 visitors to Long Island. On July 29, 1907, a fire broke out at the Long  Beach Hotel and burned it to the ground.

In 1906, William Reynolds, a 39-year-old former state senator and real estate  developer, entered the picture. Reynolds had already developed four Brooklyn  neighborhoods (Bedford-Stuyvesant, Borough Park, Bensonhurst and South  Brownsville) and Coney Island's Dreamland, the world's largest amusement park.  He gathered investors, acquired the oceanfront from private owners and the rest  of the island from the Town of Hempstead in 1907 and planned to build a  boardwalk, homes and hotels.

In a major publicity stunt, Reynolds marched a herd of elephants in from  Dreamland, ostensibly to help build the boardwalk. He also dredged along the  north shore creating a channel which would provide access for large steamboats  and sea planes to transport more visitors. The new waterway was named Reynolds  Channel.

To ensure that Long Beach lived up to his billing it "The Riviera of the East,"  he required each building to be constructed in an eclectic Mediterranean style,  with white stucco walls and red-clay tile roofs. The new town attracted wealthy  businessmen and entertainers from New York and Hollywood. Much of this  architecture still exists in Long Beach today.

By the 1950s, Long Beach became a bedroom community for commuters to New York  City. But by the 1970s, the area deteriorated. Rundown boardwalk hotels were  used by the government as temporary housing for welfare recipients and the  elderly until a scandal led to many of these homes' losing their licenses. With  abandoned hotels, vacant storefronts and a negative reputation, Long Beach  suffered all the problems associated with urban blight.

Since then though, Long Beach has begun an urban renewal, with new housing, new  businesses and other improvements. Numerous condo developments line the  boardwalk, many are new construction, and some are former hotels and apartment  buildings converted into condominiums. With a median price for a condo being at  $510,607, Long Beach real estate prices are still more than $200,000 higher  than the median price for New York. These higher prices are supported by the a  higher than average median income of $78,000 per year, which is nearly $25,000  per year more than the New York average.

The City of Long Beach provides many public amenities for city residents  including tennis centers, playgrounds, parks, fishing piers and marinas. The  Arena of Long Beach is an indoor ice skating facility and also contains a skate  park for skateboarders.

The beach though continues to be the main draw for visitors, and the main reason  so many people make Long Beach their home; and the beach isn't just for  summertime swimmers. Long Beach is home to a chapter of the Polar Bear Club,  where members celebrate the New Year by swimming in the wintry Atlantic Ocean.  In fact, Long Beach holds the Guinness World Record for the largest Polar Bear  Swim. Since the southern side of Long Beach is directly on the Atlantic Ocean,  it's beaches also are a haven for surfers who come throughout the year to ride  the waves.

Now that the summer is upon us, why not check out everything that Long Beach has  to offer. The LIRR offers one day getaways to Long Beach from Manhattan,  Brooklyn and Queens. These getaways cost less that $25 and include round trip  rail transportation, and admission to the beach. What a great way to beat the  city heat.