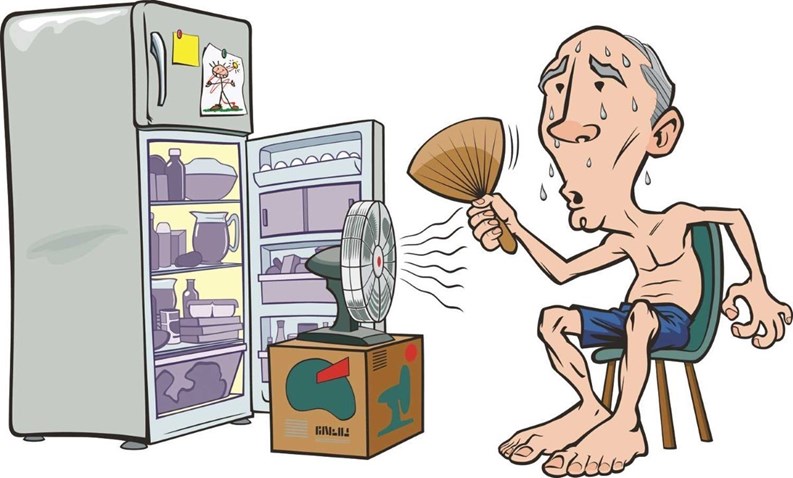 A glance at a chart of average temperatures in New York City during the summer  months (not withstanding the recent heat wave we’ve had) reveals typically it gets into the 80s during the daytime in July and  August, and cools off at night. This belies the reality—that this “average” is compiled by periods of gorgeous summer days, as well as those stretches of  heat and humidity that rival the Brazilian rain forest for sheer physical  discomfort. This is because New York is in the path of air streams from the  Gulf of Mexico, which bring not only humidity but also the summer storms, some  of which might be big enough to cause major damage.

And as Mayor Michael R. Bloomberg revealed in June, the city is preparing for  even worse weather to come along. “New York City has always faced climate risks, including heat waves, snow storms,  high winds, tropical storms, storm surges, lightning, and torrential downpours,” the official report on www.NYC.gov says. “These events affect every New Yorker, and as our climate changes, they will  become more frequent and severe. We need to reduce our contributions to climate  change, and simultaneously be ready for its effects.”

The report of the New York City Panel on Climate Change is even more blunt: “Environmental conditions as we experience them today will shift, exposing the  city and its residents to new hazards and heightened risks; we will be  challenged by increasing temperatures, changes in precipitation patterns,  rising sea levels, and more intense and frequent extreme events. While  mitigation actions that reduce greenhouse gas emissions will help to decrease  the magnitude and impact of future changes, they will not prevent climate  change from occurring altogether.”

Happily, the mayor is taking this threat seriously but in the meantime, there  are things board members and property managers should be aware of that are  affected by the heat and humidity.

Making sure that residents are physically comfortable in their apartments is, on  some level, one of the primary jobs of the board and the property manager. “We’re a service industry,” says Enid Hamelin, a property manager and director of marketing at Manhattan’s Lawrence Properties. “We want to make sure that all residents of our buildings are safe and  comfortable.”

This means, first and foremost, that the building is well-heated in the winter,  (and it’s not uncommon to find residents opening windows and using air conditioning because it’s too hot inside). Of secondary but not insignificant importance are the cooling  systems. “In the summer months, we rely heavily on air conditioning operations,” Hamelin says. “It may be central air, or it may be a building with individual units in the  apartment.”

The dog days of August are something good property managers think about well  before that. “Inspections of building operations are something we do on a semi-annual basis,” Hamelin says. “We check the roofing, the elevators, the HVAC. We have an inventory list that we  check, in every building, twice a year.”

The air conditioning is a big part of this but not the only part. Other systems  can feel the heat, too. “It affects roofing,” says John Tsampas, owner of Skyline Restoration in Long Island City. “If there’s any water trapped underneath the roof membrane as a result of leakage, once  the temperature gets to be over 90, the water starts to evaporate, and the  whole roof can turn into a big bubble.” Bubbling roofs plus heavy downpours can spell trouble, obviously, especially to  the uppermost apartments in a building.

Preparations for the summer begin early, when there is still frost on the  ground. “Starting in March, in buildings where we can control the air conditioning, we  start inspecting and cleaning the system.

We change the filters, we make sure everything works. We don’t wait until it gets hot. Better to do it before it gets hot and you don’t have to compete with other buildings for needed services.”

Indeed, because air conditioning is seasonal work, contractors who do HVAC work  tend to book up quickly. “It’s very busy right now,” according to Long Island City-based ABCO Mechanical’s Ron Gralitzer. And that was during an unseasonably chilly June while July has  been exceptionally hot, he mentioned.

During these semi-annual inspections, Hamelin says, they schedule meetings with  staff, and set up appointments to get into the apartments as early as spring. “We want to make sure that if it gets hot, if some units want to turn on an air  conditioner, they can.”

In the buildings that do not have central air, the process is different, because  the manager must physically inspect every apartment to make sure that the air  conditioners are installed properly and ready to roll through July and August.

In this, however, the hands of the property manager are figuratively tied. New  York City has laws pertaining to landlords turning on the heat to ensure that  residents don’t freeze to death as they did decades ago. This is not the case in the summer,  when residents are free to collapse from heat stroke without governmental  interference.

“We have no guide rules,” Hamelin says. “Unlike with the heat, there is no law. From October 1 to May 31, the heat must  be available in the city of New York. There are no constraints for cooling  systems.”

The onus is on the individual unit owner, then, to provide his or her own air  conditioner. Or to choose not to have one. “For people with individual units, it’s up to them,” Hamelin says. “Just like we can’t mandate what kind of coffee maker they have, we can’t specify what kind of air conditioner they can buy. We can check the voltage  and make sure it’s installed properly, but that’s all we can do.” This job, she says, tends to fall to the superintendent and his building staff  (if he has one).

Property managers also keep track of power usage, which can be so precarious  during heat waves, when everyone in the city is drawing off the same overworked  power grid. “We avoid overloading,” Hamelin says. “We can’t control blackouts, but the building can regulate electricity usage so there is  no residential blackout.”

One last thing buildings can do is establish well-cooled places where those  without AC can bask in the frosty cool of an air conditioned room. “In many of our buildings, there are cooling sites—common rooms, the lobby,” Hamelin says. “We accommodate them and provide relief from the heat.”

In times of intense heat, brutal cold, or other weather-related emergency, the  role of the property manager takes on greater significance. What can be a  transactional function assumes a more human side. This is never more evident,  on a yearly basis, than in the dog days of summer. July and August are the  months when tragedies can strike—blackouts kill cooling systems, elderly residents may accidentally turn on the  heat instead of the air conditioners, those with asthma and other health  problems are at their worst. This is when property managers, superintendents,  and building staff can be knights in shining armor—and when residents of a big New York building can feel like true neighbors.

“In the city of New York, we have an enormous population of senior citizens and  disabled people,” Hamelin says. “We keep track of anyone in a building who might have problems” during heat waves or other troubling periods. “During Hurricane Sandy, we were doing this, making sure everyone had water and  food. It’s the same thing in the heat. We know who is on life support. We know who’s having a difficult time. We make sure someone checks on everyone.”

This cuts to the bone of what it means to manage not just a property, but a  cooperative—a community of people who live under the same roof. Hamelin phrases it well: “It’s not just our job—it’s the humane thing to do.”