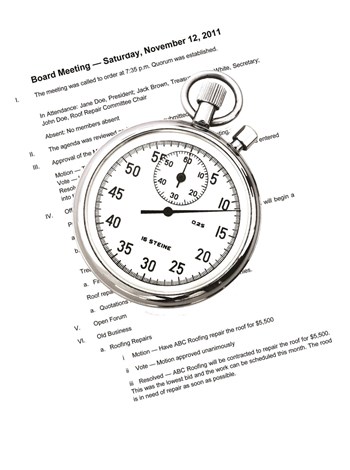 While a lot of the day-to-day business of running a co-op or condo building  happens in the management office or on-site at the level of maintenance and  staff management, meetings—board-only and resident alike—are the forum where important information is shared, policy formed, individual  voices heard, and big decisions made.

For that and other reasons, it's crucial to keep thorough, accurate meeting  minutes as a record of what goes on in your building or association's meetings.

Taking down meeting minutes not only is required by a co-op’s governing documents, it also is required by law. New York state law—specifically Business Corporation Law (BCL Section 624(a))—requires that co-op corporations retain records of board of directors’ meetings, of shareholders meetings, and of executive committee meetings. Board  meetings often are held quarterly, but special meetings of the board that fall  outside the quarterly schedule are not exempt from the minute-taking law.

According to Andrew B. Freedland, an attorney with the Manhattan-based law firm  of Rosen Livingston & Cholst, LLP, condo boards aren't as strictly bound by the BCL, but most follow  the same protocols as co-ops when it comes to minute-taking and documentation. “While condominiums are not specifically subject to [the BCL], it's often cited  as a model for condominium governance,” he says. “Unlike cooperatives, which are corporations specifically governed by the BCL,  condos don't technically fall within the purview of the BCL."

While boards differ broadly in exactly how they function from building to  building and day-to-day, when it comes time for a meeting, most have the board  secretary record the minutes (though some boards will allow an outside agent—such as their managing agent—to record them.) It's not hugely important who physically records the minutes  because ultimately the board must approve the official record, and that usually  happens at the next meeting, says Andrew Brucker, a principal with the  Manhattan-based law firm of Schecter & Brucker, P.C. The BCL also allows that minutes may be electronically recorded  as long as they are transferable to written form "within a reasonable time."

While some board secretaries take only cursory notes during meetings, others err  on the side of excess, foundering under the effort of trying to record every  word uttered. But there is certainly a method—and perhaps something of a craft—to taking accurate and appropriate meeting minutes of a board meeting without  doing too little, or too much. Knowing something about that process could mean  the difference between a smoothly-running board meeting and one that’s bogged down in minutiae over a controversial decision or a pending lawsuit by  a shareholder or a unit owner.

As to what should actually make it into the minutes, as a general rule the fewer  details that are seen on the record, the better. Certain information should not  be included in meeting minutes, such as any small details that have no real  bearing in the business at hand.

Obviously, anything discussed in a meeting that has to do with pending  litigation should be left off the record (to avoid more litigation). Some  buildings also omit from meeting minutes any mentions of personnel, or of  shareholders who are in arrears. Those people can be mentioned in minutes, but  only vaguely enough so as not to potentially slander the residents, such as: “started action on the person owing three months rent.”

In short, “The only thing that has to be in the minutes are actions taken,” Brucker says, adding that there is no standard or official way in which meeting  minutes should be taken. “You should not put everything down [that occurs in a meeting] in the minutes,  because they could be used in a court of law in a lawsuit. You should include  in minutes only who was in attendance, action items, who was absent and the  date.” It is essential to be careful in minute-taking because of the strong  possibility of error on the part of the recorder, Brucker says. “It’s possible that the [minute-taker] might get the minutes wrong, or put in their  point of view… Minutes must be carefully reviewed by the board before they approve them,” he says.

Minute-takers should remember at all times that a co-op or condo is essentially  a vertical neighborhood. A seemingly minor mistake in naming a person who  shouldn’t be named in meeting minutes could cause hard feelings or even a lawsuit. With  meeting minutes, experts agree that it is better to err on the cautious side.  The secretary or whomever is charged with recording meeting minutes for a board  can take quick, succinct minutes by narrowing in on only pertinent information.  So those who are capable of such a task should be the only people taking  minutes. “If the person taking the minutes can really focus on the essence of what is  being said, that's fine,” Wolf says. “If they don’t have the ability to grasp it, the minutes become useless.”

“The sensible thing is for a person other than the property manager to take the  minutes,” says Harold Wolf, owner of The Back Office, which provides back office services  for co-ops, condos, property managers and landlords. “The property manager has to give his thoughts and listen to others. If he’s taking notes, he’s lost.”

In our litigious society, the subject of what is put into minutes is so sticky  that some boards now don't even allow amateurs (including managing agents) to  tackle the job of recording at all, opting instead to have their legal counsel  take the meeting minutes, to avoid any legal problems resulting from that  written record. Such barrister-scribbled notes are lean indeed, and by design – but they also cost, in the form of the attorney's time.

Good minute-taking can also help boards who are prone to rambling, long-form  discussions during meetings that wander all over the map and accomplish little  or nothing. The minute-taking process can keep things on track by sticking to  business and by keeping personal gripes about neighbors, maintenance problems  with their apartments, or other unnecessary details out of the discussion.  Boards need to stay on-task.

“I advise boards to try to deal with the [community] problems as businesspeople,” says Herb Rose, owner of Herb Rose Consulting, a board services firm. The board  may be made up of volunteers, not professionals,” he says, “but you still have to deal with things in a business fashion. With some boards,  it is a real challenge.”

Help is available for board members who want to become more professional at  their unpaid, volunteer board member jobs. Smart Technologies, in Calgary, runs  the helpful website www.effectivemeetings.com. Board members can find many  useful tips there for how to prepare for and conduct meetings - including not  having a meeting if the information to be discussed could be conveyed just as  easily via a memo, by e-mail or through a brief report.

A Note on Notes

The degree of access that non-board member residents have to meeting minutes  differs from building to building. But under state law, shareholders are only  entitled to see the minutes of shareholder meetings—not those of closed, board-only proceedings. Even so, these days most buildings  allow owners and also potential buyers to look at shareholder meeting minutes.  New buyers care about the meeting minutes for a variety of reasons—to scan the financial health and business atmosphere of board meetings or even  to see if there have been pre-existing problems with the apartment they are  considering buying.

“New York law requires that co-ops permit a shareholder, upon five days written  notice, to inspect and copy the minutes of shareholders’ meetings for any purpose reasonably related to such person’s interest as a shareholder—or unit owner, in the case of a condominium," says Freedland. “While you are permitted to inspect the minutes of unit owner proceedings, the  board may require that you submit an affidavit to the condo or its managing  agent that (1) the inspection is not for a purpose which is in the interest of  a business or object other than the business of the condominium, and (2) that  you have not within five years sold or offered for sale a list of unit owners  of any condominium—or shareholders of a corporation—or aided or abetted any person in procuring such records for any such purpose.  Condominiums usually don't require such an affidavit for inspecting unit owner  meeting minutes."

And the law isn't kidding around about the issue of access, adds Freedland. “In addition to requiring that unit owners be permitted to view and copy minutes  of unit owner meetings, Section 624(b) of the BCL also permits a unit owner who  has been denied the right to view unit owner meeting minutes to apply to the  Supreme Court for an order compelling inspection of the minutes and records of  unit owners’ proceedings."

Regardless of how promptly they are produced upon request, residents and  would-be buyers in a community should know that meeting minutes can be redacted  after they are taken. For example, if a resident requests meeting minutes for a  particular date and the board agrees but wants to keep some info hidden from  the resident, the board can redact those minutes prior to releasing them to the  resident. Again, as with other decisions regarding a board’s meeting minutes, such a move would be made to protect the community from  unneeded litigation.

In the event of a lawsuit involving a board, manager and/or resident, meeting  minutes could very quickly be brought up as evidence in the legal suit.

“In every lawsuit against the board, the plaintiff always asks for meeting  minutes to see what transpired,” Brucker says. “The minutes could hurt [the board] with a misstatement of facts, or too much  information.”

Some experts say a good rule of thumb in minute-taking is to assume that  everything recorded could be used in court. That way, minutes should be beyond  reproach in the material they cover.

“Anything can be used as evidence,” Wolf says. “Whether it is accepted varies from case to case.”

Jonathan Barnes is a freelance writer for The Cooperator and other publications.  Associate Editor Hannah Fons contributed to this article.