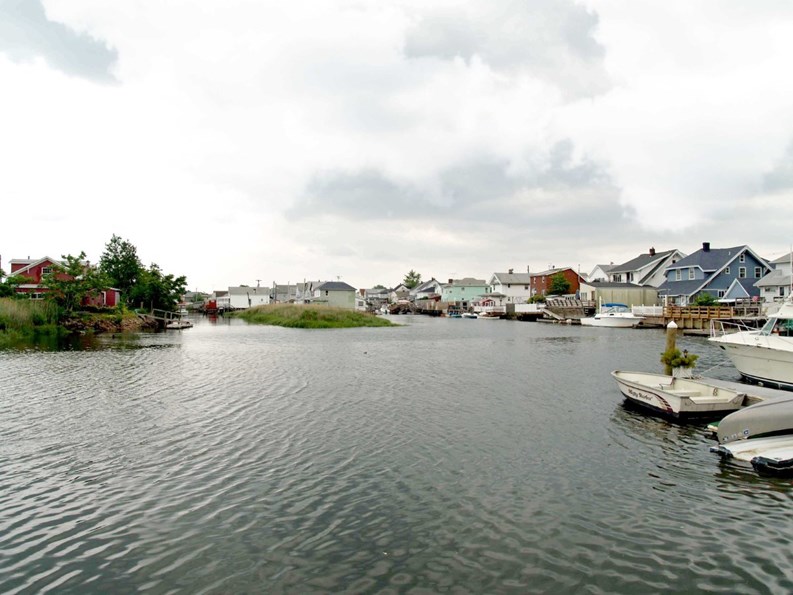 When most New Yorkers think of Howard Beach they think of the AirTrain station that connects it to neighboring JFK Airport, a few widely publicized racial incidents and the neighborhood being home to more than a few organized crime figures—mob bosses John Gotti and Joe Massino both called Howard Beach home at one point.

But this middle/working class Southern Queens neighborhood is so much more than that. In Howard Beach you’ll find sprawling suburban yards, seaside views, an intriguing mix of geography: Jamaica Bay, marshes, waterways and canals and a wide variety of housing options where you can find everything from seaside cottages to high-rise condos.

There’s also a pleasant mix of local businesses and national chains. Vincent’s Clam Bar and waterfront pizzerias are known for Italian cuisine and Russo’s on The Bay is popular catering hall that hosts wedding receptions, bar mitzvahs’ and sweet sixteen parties. It’s a family neighborhood, primarily Italian and Jewish, who stay for years and in many cases, generations. The area of Howard Beach is bordered in the north by the Belt Parkway and South by Conduit Avenue in Ozone Park, in the east by 102nd -104th Streets and in the west by 78th Street.

Howard Beach was founded in the 1890s by William J. Howard, a Brooklyn glove manufacturer who operated a 150-acre goat farm on meadow land near Aqueduct Racetrack as a source of skin for kid’s gloves. The grazing goats fattened themselves up by munching on marsh grass within their sod pen.

The entrepreneur eventually bought more land in 1897 and began working on his next project, Hotel Howard. He would go on to build 18 cottages and would open a hotel near the water, which he operated successfully, until it was destroyed by fire in 1907. Two years later he formed the Howard Estates Development Company.

Under his guidance, enormous dredging operations were carried out in Jamaica Bay. He dredged and filled the land until he was able to accumulate over 500 acres. Howard’s plan was to build a pier and hotel over Jamaica Bay which would attract vacationers and nature lovers.

The Long Island Rail Road established a station named Ramblersville in 1905, shortly after a post office by the same name opened in the area.

With his property Howard laid out several streets, water mains and gas mains and built 35 homes that were priced in the $2,500 to $5,000 range. By 1915, a casino, beach and fishing pier were added. The name of the neighborhood was officially changed to the name Howard Beach on April 6, 1916. The area expanded and development continued at a rapid pace. In 1922, investors were brought into the mix who sold lots for roughly $690 each. The rest of Howard Beach consisted of empty marsh land and many small fishing bungalows that dotted alongside Hawtree Creek and Jamaica Bay.

When World War II ended Queens, and what is now Howard Beach, went through a major suburban building boom. This led to the building of many Cape Cod and high-ranch style houses on 50 by 60 lots. The area was developed as Rockwood Park to the north and Spring Park to the south, together comprising what would be known as “New Howard Beach.”

In the 1950s, farm land north of Rockwood Park was developed with the building of many red bricked two-story, garden style cooperative apartments along with some six-story co-op and condo apartment buildings. Private two, family homes were also built at a rapid pace. Development continued in the various neighborhoods in Howard Beach through the 1960s and 1970s and Cross Bay Boulevard became the area’s main shopping thoroughfare.

In 1980s, several racially-motivated attacks dominated the headlines of New York City newspapers. But, perhaps the most notorious and high profile would be the Howard Beach incident that took place in December 1986.

Late on the night of Friday, December 19, 1986, three African-American men entered a pizzeria on Cross Bay Boulevard and asked to use a phone to call for assistance after their car broke down on a desolate stretch of Cross Bay Boulevard.

After being told no phone was available, they ate a few slices and left the pizzeria. Once outside they were confronted by a group of about 10 white men who yelled racial slurs and told them to get out of their neighborhood. The black men fled, pursued by the mob. One man ran onto the nearby Belt Parkway where he was hit by a car and killed. A second man was severely beaten with baseball bats, tree limbs and fists and the third managed to escape.

The next morning then-Mayor Ed Koch compared the incident to a lynching. The incident triggered a wave of racial tension in New York City and garnered national headlines. Reverend Al Sharpton led several protests in the neighborhood while crowds screamed obscenities and heckled the marchers. A total of 12 defendants were indicted by a grand jury and charged with attempted murder.

A similar incident took place in June of 2005 when three blacks, who admittedly went to Howard Beach to steal a car, were attacked with baseball bats. One of them was injured enough to be hospitalized and two arrests were made in the case. On man who uttered a racial epithet during the baseball attack was sentenced to 15 years in prison.

Howard Beach was one of many seaside neighborhoods hit hard by the October 2012 storm. At the height of the hurricane, a ten-foot-high storm surge from Jamaica Bay flooded old and new Howard Beach wiping it out but most of the waterfront pizza parlors, nail salons and restaurants on Cross Bay Boulevard, a main thoroughfare in Howard Beach, rebounded quickly despite extensive water damage and electrical repairs. As of 2013, recovery in the neighborhood has been successful but still ongoing.

According to Trulia.com, average price per square foot for Howard Beach was $306, an increase of 19.1% compared to the same period last year. There are currently 41 resale and new homes in Queens on Trulia, including 1 open house, as well as 2 homes in the pre-foreclosure, auction, or bank-owned stages of the foreclosure process. The average listing price for homes for sale in Howard Beach was $721,426 for the week ending March 12, which represents a decrease of 0.7%, or $4,990, compared to the prior week.