Do not show again [X]
By Keith Loria   2008 March Neighborhoods 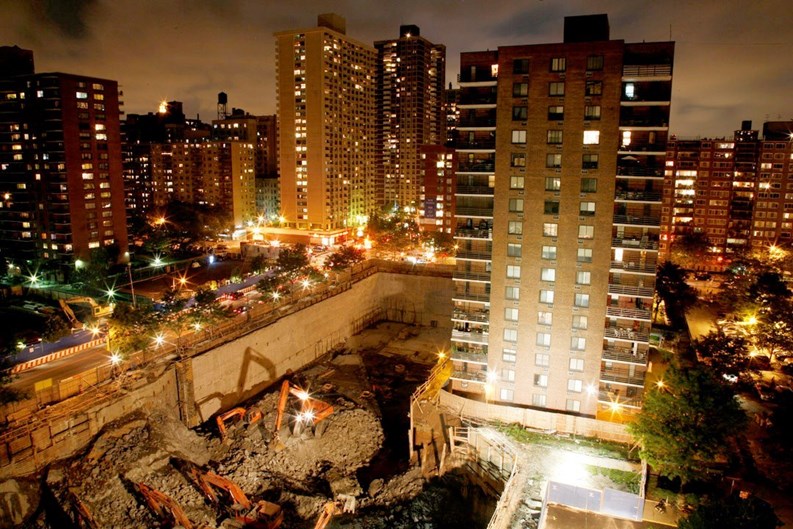 Affordable apartments with fresh air, good light, and attractively landscaped grounds for middle-income people—those were the goods Park West Village was created to deliver in the late 1950s and early 1960s as part of a government-subsidized urban redevelopment plan.

Until l987, all PWV apartments were rent-stabilized. In l987, the buildings at 372 and 382 Central Park West were converted to condominiums; the buildings at 392 and 400 CPW became condos in 1991. At that point, some names were changed, though Park West Village remained a single mini-neighborhood entity.

"Park West Village used to refer to all of the seven lookalike buildings between Central Park West and Amsterdam from 97th to100th," says Barbara Earnest of the Park West Neighborhood History Group. "When the four buildings off CPW turned condo, they were renamed Central Park West Towers," though she adds that the "Towers" appellation is generally only used among brokers — residents and property managers know the community by its original name.

One of the city's largest and most controversial "urban renewal" projects, Park West Village was initially known as Manhattantown, and then as West Park Apartments. The complex was designed by Skidmore, Owings & Merrill, and was built by Webb & Knapp, legendary builder William Zeckendorf's development company, and the Aluminum Company of America. The multi-block development took more than a decade to come to fruition in 1960 and scandals relating to it ultimately led to a rethinking of the "slum clearance" programs of the era.

In his Upper West Side Book, author Carter B. Horsley wrote about how the project was conceived in 1949 by the West Side Housing Committee. The committee was a coalition of seven local civic organizations driven forward by the imperious master builder Robert Moses, the city's construction coordinator and the chairman of the city's Committee on Slum Clearance.

According to Earnest, in the early 1960s PWV was bought by Alcoa. In 1972, it was sold again, this time to developer Harry Helmsley. In 2000, PWV was sold to Lawrence Gluck and Joseph Chetrit.

Liz Pisanchik moved into the Park West community in the mid-1970s, when it was still rent-stabilized, and was part of the conversion committee when it switched over to condos in 1991.

"When we converted, I was on the board, and it was all about 'divide and conquer,'" says Pisanchik. "We got together and agreed that we were going to negotiate with Hemsley to get the best deal possible as potential buyers. We got a very favorable deal. Everything was done with the input of residents, and I would say the tenants and owners had equal say."

As part of the conversion, owners were allowed to enter a lottery for any units that were available, because of empty apartments or people moving out. This gave tenants a chance to upgrade to larger apartments, move to a more desirable floor with better views, or have the chance to buy as an investment.

In addition to still living there, today Pisanchik also works as a broker for the Corcoran Group and deals with many apartment units inside CPW Towers at Park West Village.

"I think that we're the affordable Upper West Side on Central Park," Pisanchik says. "Certainly affordable compared to $4,000 per square-foot at new construction like 15 Central Park West down the street!"

The three Columbus Avenue buildings house rental apartments at both market and rent-stabilized rents. Condo properties at PWV are divided into four basic formats, although some owners have combined apartments to create larger homes. The four styles are studios, one-bedrooms (which are three-room apartments), junior-fours (which are three-and-a-half rooms), and two bedrooms. The latter two formats have balconies.

"The original layouts featured separate kitchens, walk-in closets and big windows," Pisanchik says. "Because of the way they laid out the property, every apartment gets great light and air. For the apartments that clear the treetops, there are city, park and bridge views. When they hit the market, they sell fast."

"From September 2007 to December, about 40 apartments closed from $800 to $1,200 per square-foot, and there are another dozen on the market right now asking between $950 and $1,500 per square-foot," Pisanchik says. "Our prices have trended upwards with the rest of Manhattan."

Each of the condos features a 24-hour concierge, a resident manager, high-speed cable, a laundry room, storage, a children's playroom, a fitness center, a conference center and outdoor parking. The grounds have restored trees, which reflects Robert Moses' years as the city's park commissioner.

"It's a garden area with over 300 trees, many landscaped gardens, and a joint playground for children in the middle of the four condos," Earnest says.

Lauren Cangiano is a broker at Halstead Properties and deals with CPW Towers apartments that become available and are renovated.

"Since September, we have had about 20 units that were renovated, and moving forward we expect to have more," Cangiano says. "These are top-notch renovations. While it's not as sexy as the new developments with all the amenities, you can't beat our location. We're right on the park, and it's a very good value for being on Central Park West."

Looking around the neighborhood, the Ariel on Broadway and 98th goes for about $1,500 per square-foot, which is a lot more than the $900 to $1,250 that Cangiano has seen for Park West.

While it may not have the buzz of Broadway or the retail stores of lower Park Avenue, the Upper West Side of Central Park where the condos sit has a great deal to offer its residents.

Museum Mile is just across the park, the Museum of Natural History is just down the street, and if you fly frequently on business, you can leave your apartment at 7 in the morning and be at La Guardia airport 30 minutes later.

"Of course, the main attraction is that the park is right outside your door," Cangiano says. "It's also close to Columbia and very family-oriented. The skating rink in Central Park is close by, and becomes an outdoor public pool in the summer. It's also a little quieter, which people like."

There's also the Ryan Center on 97th Street, which was the first neighborhood health center in the country. There's also a good public school on 97th, the library on 100th, and a police and fire station right there.

And new development is imminent as well, according to Paul S. Bunten, Ph.D., a resident and historian of Park West Village. "The portion of the Columbus Village development proposed for Columbus Avenue from 97th St. to 100th St. will create a 786-foot street wall, the longest, unbroken street wall along any avenue frontage in Manhattan, apart from the Javits Center. More than 282,000 square feet of commercial floor area is planned within this three-block area, or the equivalent area contained in eight typical blocks of commercial overlay in Manhattan Community District 7."

According to Winick Realty Group, the commercial leasing broker for the development, "The retail site will be the first development in the city to offer that much retail space over three contiguous blocks."

"This degree of commercial density is by any measure extraordinary in a residential zone," says Bunten, "and we also believe it to be unprecedented."

Anyone who lives in the neighborhood now can tell you that the biggest issue going on involves the new construction that is taking place right between the PWV buildings that have not yet been turned into condos.

The space that used to be restaurants, retail stores and a popular tennis club is now being developed into a huge mall that will house a Whole Foods, a Duane Reade drug store, and other major brand stores.

"It's a mega-shopping mall that [takes up] three blocks on both sides of the street and houses a major parking lot," Earnest says. "The concern is about the traffic with the huge trucks and lots of cars. This area is zoned for local businesses, not for destination businesses. We are concerned that they are pushing the envelope a little."

Many residents have been against the construction from the beginning, complaining about the noise and what it's doing to the area. Even the Lutheran church on 100th St., which is the only building that remains from the pre-Park West Village days, had to remove all its stained-glass windows because of potentially damaging vibrations and blasts coming from the construction, and now faces possible demise. At press time, the City, representatives from the developer's camp, and PWV resident advocates are working on a plan that will hopefully strike a balance between developers' interests and the rights and comfort of neighborhood residents.

It might be a headache now, but once the new retail hub is in place, real estate brokers believe that it will be a good thing for the area and prices will reflect that.

"Years ago, over 96th Street on Central Park West wasn't really popular," Cangiano says. "It was the dividing line. But with Harlem selling at such high prices and every neighborhood becoming a real neighborhood, we are seeing rising values here. The developers are building all of that new construction now with Whole Foods being the big draw and I think it's really exciting for the neighborhood."