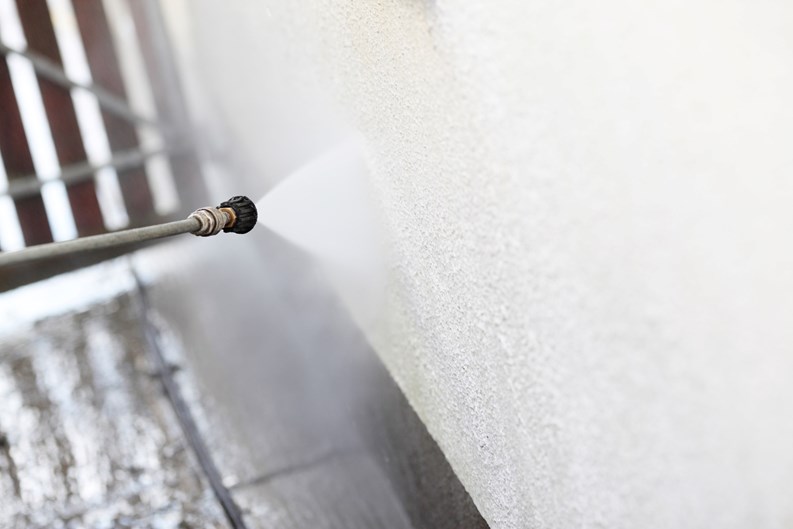 Like people, buildings age. Even under the best of atmospheric conditions, dust, dirt and grime accumulate, changing a building’s appearance over time. Often it’s not until a building’s façade is cleaned that one notices how it was dirty to begin with. In some cases the patina that grows on a masonry façade can even enhance a building’s appearance. Consider the many fine, old, iconic buildings in major cities around the world. A postcard would look a lot different if these buildings were cleaned regularly!

How Often to Clean?

So the question arises: how much, and how often to clean your building’s façade?

“That often depends on the owner,” says Mark Rashkow, partner and founder of Ace of Spray, a pressure washing company with three offices located in Chicago, Milwaukee and Central Illinois. “People will argue that dirt and grime can hide defects, but they also accelerate aging,” bringing on additional problems. “Some owners clean their façades on an annual basis, others wait several years. Again, it depends on the owner and what standard they want to maintain.”

How often a building should be cleaned has a lot to do with the actual physical location of a property relative to various sources of grime. According to an article entitled ‘Façade Cleaning: For More Than Appearance’s Sake,’ published by Hoffmann Architects in Journal, “Not all building façades warrant the same amount of attention. A building’s location, function and geographic and atmospheric conditions all play roles in determining the level of cleaning effort necessary to achieve the desired appearance.”

“There is a natural buildup of atmospheric pollutants which develops on surfaces over time,” explains Rashkow. “How high the concentration of that content is in the air is what dictates how quickly it builds up on your building. A building near a highway where there are obviously higher concentrations of pollutants from cars trucks etc, will cause grime to develop more quickly than a building in, say, a more isolated suburban setting. On the other hand, buildings in that suburban setting may be exposed to more moisture, which can lead to mildew – especially when coupled with landscaping elements in close proximity.”

Tom DeFrancesco, vice president of J&T Mobile Wash, specialists in both building and vehicle washing, with locations in New York and New Jersey confirms Rashkow’s findings, noting that these conditions are normal for urbanized and suburbanized areas in the colder, wetter parts of the United States, such as the Northeast and Midwest.

“Emissions are the primary source of façade grime in urban environments,” he says. “It’s especially tough on limestone.” Limestone was the primary façade material used in the second half of the 19th century, and is commonly found in major cities in the Northeast and Midwest. The effect of emissions-based pollution on limestone has been known for decades.

“In suburban areas,” DeFrancesco continues, “façade grime is more often the result of mold or algae – green mold, not the more dangerous black mold. It comes from moisture, and is most commonly found on the northeast fronts or corners of buildings.” One of the interesting side benefits of regular cleaning in suburban settings is that “When a job is done properly, with proper detergent, we are actually killing the mold spores. It will come back though, but less often. When you see it returning is when another cleaning should be done. Don’t wait till it’s completely covered.”

Victor Cruz is an accounts manager with Cliffhangers, a Massachusetts-based firm that provides cleaning services for both façades and windows all throughout New England. “Different surfaces provide different types of cleaning problems,” he says. “Even glass can get permanently stained. Frequency of cleaning depends on the owners; some like it often, others not. We believe it keeps up ‘curb appeal.’”

According to Hoffmann Architects in their article in Journal, there are four basic categories of façade cleaning techniques: “Chemical, non-chemical, abrasive, and those that require a combination of these methods. For example, though a masonry façade cleaning project may partially succeed with a non-chemical water soaking procedure to loosen dirt and wash it away, it may be necessary to supplement this method with an appropriate cleaning agent (chemical) to treat areas with heavy stains.” It should be noted that in the façade cleaning business, ‘chemical’ can mean anything from mild detergent to sulfuric acid.

The most common and widely-used cleaning technique is pressure washing, which is typically non-chemical. “We can dial up or down,” says DeFrancesco of the water pressure applied to literally blast crud off the surface of bricks, stone, and so forth. Pressure can be adjusted up to approximately 2,900 pounds per square inch, depending on the extent of staining and the underlying building material. “We use very hot water pressure washers,” adds Rashkow. “Ninety-eight percent of our jobs are chemical free, which is the case for most professional washers.”

When chemicals are needed, “There are specific detergents for specific surfaces, whether they be granite or limestone or stucco,” says Rashkow. “It’s a very big business.” Much depends on the type of surface. “As far as limestone,” says DeFrancesco, “we use special chemical cleaners and lower pressure, but the same high temp of 200 degrees.” This method is knows as a ‘soft-clean’ system with detergents.

According to Cruz, “The most difficult surface is stucco. In all cases though, we inspect the building thoroughly before we begin, or even price a job to manage the potential for damage.” This is good practice, as backed up by the article in Journal, which notes that “In protecting against damage to the building during façade cleaning, the design professional should submit in advance a detailed description…of proposed methods of protection for preventing harm, damage or deterioration caused by cleaning to all building elements, materials and finishes.”

Façade cleaning can take anywhere from a couple of days to a couple of months, depending on the scope of the job and the size of the building. For a ten-story building in Manhattan or Chicago or Boston, a cleaning job could take as much a two months. For a small suburban property, it might only take one day.

“If it’s relatively tall, a building has to be encapsulated in scaffolding where everything stays contained within the cleaning area itself,” says DeFrancesco. “If it’s a lower-rise building – say up to three stories – we do it with a minimal pedestrian impact time, like at night or early in the morning. We rope everything off and have flaggers to direct the foot traffic. All the workers wear full face masks or hazmat suits when necessary, depending on what chemicals we might be using.”

Cruz explains that in some areas when chemicals are used, they may have to take steps to reclaim the contaminated runoff water. “If we are using chemicals, we have to recycle all water,” he says. “We make sure it doesn’t go down the drain,” thereby contaminating local water tables. “If a town has water ban (as Stamford did last summer), we may not be able to do a job,” because generally his company uses their own equipment but taps into the town’s water supply.

Rashkow recommends that “you be aware of your surrounding, neighboring buildings and pedestrian traffic and vehicles on the street. There are at times permit requirements, and you may have to encapsulate a building before you can use chemicals. You must control the inclusion of chemicals in your estimates because they are very expensive – as is the cost of encapsulation – and the chemicals can be dangerous. Detergents and chemicals are required to be recaptured under many local ‘green’ laws.”

Rashkow, DeFrancesco and Cruz also all report sending their employees for regular training and refresher courses. “A lot of training is required,” says Rashkow. “We don’t allow anyone to power wash a façade until they have been with us for a year, and then it’s still monitored. All training is done within the company.” DeFrancesco concurs, adding that “Training is very important. Our professional organization provides training for our employees.” These courses are available on a regular basis. Cruz adds that, “We send our guys for safety training every year, and to qualify for recycling procedures.”

All companies performing façade cleaning services carry insurance. Insurance coverage is a general policy not specific to any particular job. It is part of a larger policy of business insurance, according to all three experts quoted here. As far as licenses are concerned, that depends on location. Cruz says no license is required in any New England state to clean building façades. According to Rashkow, Illinois does not require specific licensing, either. DeFrancesco says New York does not require licensing, but New Jersey does. Other considerations are ‘green laws’ mandating particular treatment and disposal of chemical-containing water or other materials, and whether a building has been declared a landmark. In both New York and Chicago, landmarking commissions must review any work to façades before it is done, which can add more time to the process. They must approve both the method used and any chemicals or detergents to be employed, as well as a consideration as to whether and how the façade cleaning will affect the overall look of the building from a landmark perspective.

Finally, what should one look for in a façade cleaning company? Perhaps Rashkow says it most succinctly; “I recommend that you hire a professional, and get references. Make sure they are properly trained and equipped.” Clearly, no façade job is a ‘small’ job and the success rests on the capability of the team that will execute your building’s façade cleaning plan. Regardless of whether yours is a historic, stone-fronted mid-rise or a glass-and-steel tower, keeping your exterior clean is a matter of both appearance and responsible maintenance.

A.J. Sidransky is a novelist and staff writer for The Cooperator.