NBC News recently reported on a 2019 class-action lawsuit filed by shareholder-tenants of several New York City co-ops that the city took over under the aegis of a controversial program called Third Party Transfer (TPT). The program was started in the 1990s during the Giuliani administration, and allows the City to seize distressed or abandoned private property and give it to developers—ostensibly to create low-income housing and eradicate “widespread blight.”

The plaintiffs in the class action allege that seized properties were not distressed as defined in the TPT program’s guidelines, and that the City failed to timely notify the nearly 700 affected homeowners—most of them Black and Latinx—that they were in danger of losing their homes. As such, say the plaintiffs, the program has unfairly aided gentrification, displaced families of color and deprived them of millions of dollars in potential equity. According to the plaintiffs’ attorneys Gregg Weiner and Matthew Bermanhey, they are seeking $1 billion in collective lost equity and wealth from the city and its developer partners.

After it was stalled by a lower court, reports NBC News, the suit was allowed to move forward in June of 2021 when the 2nd U.S. Circuit Court of Appeals advanced the case.

One of the three named plaintiffs, Sherlivia Thomas-Murchison, wrote of the TPT program in a statement to the court, “The same laws were craftily manipulated and re-interpreted to usurp property rights, and steal resident-owned and controlled cooperative apartment units and eradicate me and my extended family’s position as shareholders and equity owners, and our right to pass our shares and residences on to our children. I imagine the same has happened to hundreds of residents in my immediate community, which consists of predominantly Black and Brown people.”

Amanda T. Boston, an assistant professor at the New York University Marron Institute of Urban Management whose work focuses on gentrification in New York City, provides additional context, telling NBC News that “The TPT program is just one in a long history of policies geared toward transforming the city for more affluent and ‘desirable’ residents. Black homeowners have disproportionately borne the burdens of these policies due to histories of structural racism and economic inequality that have, quite frankly, made their relationship to homeownership more precarious than other demographics. The fact that historically Black neighborhoods are gentrification ‘hotspots’ only adds a historically grounded level of suspicion of a policy that seizes hard-won homes from local residents.”

New York City Law Department spokesman Nick Paolucci said in a statement that “The City believes the case is meritless and should be dismissed,” and that the appellate court’s advancement of the case was merely procedural. The attorneys for the other defendants did not respond to requests for comment, according to NBC News’ reporting.

According to the reporting, the TPT program was suspended soon after the suit was filed in 2019. In response to growing backlash, a working group was formed to issue a report on the program and recommendations for its future. 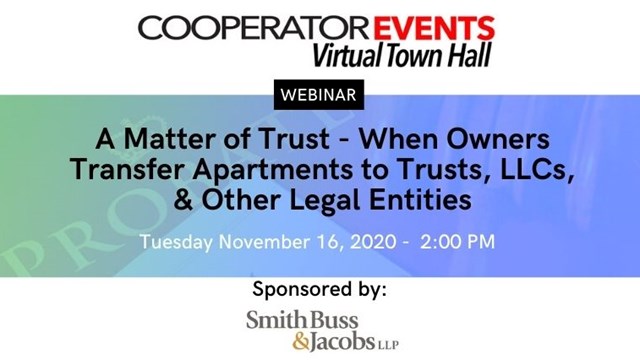 The CooperatorEvents Presents: A Matter of Trust - When Owners Transfer Apartments to Trusts, LLCs, & Other Legal Entities