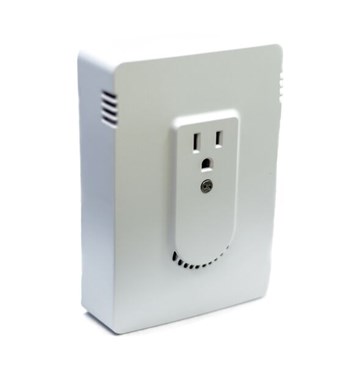 A new device can detect cigarette and marijuana smoke and then send out an alert. (FreshAir Sensor)

For those who live in multifamily residential buildings, the scenario is all too familiar: a neighbor lights up a cigarette inside their unit, and the smoke travels through the hallway and finds its way into neighboring residents’ homes. Sometimes we know who the culprit is and sometimes we don't. Either way, it's a nuisance that can pose dangerous health hazards for everyone in the building.

Now a company based out of Lebanon, New Hampshire is looking to crack down on those who smoke in prohibited areas. Called FreshAir Sensor, the company developed a plug-in device that cannot only detect nicotine and marijuana in the air through sensor technology, but it can report where the violation occurred and measure the amount of smoke. Since April, this new monitoring detector—which costs $120 plus a $4 month monitoring fee—has been sold to property managers and hotels, says FreshAir Sensor founder and president Jack O’Toole, who notes that pilot programs are taking place in a number of multifamily dwellings.

“Smoking in multifamily housing is a huge problem,” says O'Toole. “About two-thirds of people living in multifamily housing are unwillingly exposed to smoking during an average year. So our detector will allow people who are property management companies, co-op boards and condo associations to ensure that everybody's living up to their agreement in places that don't allow smoking.”

How Does It Work

O'Toole and his partner Joe BelBruno, a chemistry professor at Dartmouth College, developed a polymer-based sensor that behaves like a biological receptor. “When that target molecule comes along, it binds to a sensor,” says O'Toole. “And we measure the presence and amount of that target molecule by changing electrical properties on the sensor. So it's really sensitive, and it's really specific.”

The plug-in device fits into a standard electrical wall outlet and has a tamper-resistant screw. Once the smoke is detected, the FreshAir Sensor device reports the violation via WiFi to a central monitoring system, and then the owner of the device—whether it's a hotel or a property manager—is alerted by email. Afterward, a chart is generated that indicates when the smoking occurred and the amount of smoke in the air. “If someone smokes,” explains O'Toole, “it notifies our back end and we'll immediately email customers, telling them, "Somebody's smoking in Apartment 317 or Unit 52."

The device could be seen as a convenient way to crack down on someone smoking in the building and where it's happening or not happening. “A common problem is somebody is complaining about smoke, smelling smoke in their apartment, and it's trying to track down who's doing it,” O'Toole says, “trying to resolve that whole situation which is pretty painful, and this takes away that problem. It'll be clear that all these places are not being smoked in and this other one is.”

There are however, a number of hypothetical situations or variables that the FreshAir device raises. For instance, suppose the person was smoking heavily outside and then returns to their unit with the smell of nicotine on their clothes? “It's not enough,” O'Toole says, “because nicotine actually isn't very active at room temperature, at even human body temperature. It's actually the smoking of the cigarette that gets the nicotine moving around faster, or activates it and makes it get to the sensor.”

Or what if a first-floor tenant has their windows open and someone outside lights up a cigarette, making it possible to set off the detector by accident? “I think it's not probable, but it's possible,” O'Toole says. “Outdoor stuff blows away pretty quickly so it's tough to get the concentration of smoke. But if you have a balcony and the door is open and the wind was blowing in there, I think there's some theoretical situation where that could happen, but I think it's relatively easy to avoid. You just try not to place the device where that's likely to be a problem.”

As for the legality of installing such a monitoring device inside a condo or co-op (which is something that should be discussed among the property manager, the board, shareholders and unit owners), Adam Leitman Bailey, a New York real estate attorney, sees a scenario where that would possibly be acceptable. “I don't know enough about this device,” he says, “but it looks like if you installed it in the hallway—in which you're definitely allowed to put up cameras—you can do it. You would detect the smoking and you would know it could be from one or two homes, depending on how many are on the floor. Or you could even put it right outside the door. That may be enough to have the goal achieved of finding smokers and leaks.”

“In most buildings you're allowed to smoke in your apartment,” Bailey adds. “There's no law right now that stops that. It's really the hallway that you want to test. It's not smoking in the apartment that matters, it's how it affects other people. So if the person is complaining, and you put this device across the hall next to theirs, then you can get a good test. That's where I think it's most useful anyway, not inside the apartment but outside of it.”

The Verdict So Far

According to O'Toole, property managers have reached out to FreshAir Sensor about the detector because people don't want to be exposed to second-hand smoke. “It's dangerous for people to be around it, and people don't like it,” he says. “And for property managers it's also expensive. Depending where you are in the country, it costs $3,000 to $8,000 extra to turn over an apartment, a two-bedroom apartment that's been smoked in, so they certainly don't like that.” He adds that some property management companies view his device as an amenity. “They believe their property will be more desirable if they can demonstrate that they really enforce the no smoking policy,” he explains.

As for what advice he would give to those who are considering using this type of monitoring device, O'Toole says: “One, this is the only technology available that detects airborne nicotine or marijuana smoke, so there's no other technology right now that can do this. And, two, we hope this has a meaningful impact on people in multifamily housing on reducing their exposure to smoke.”