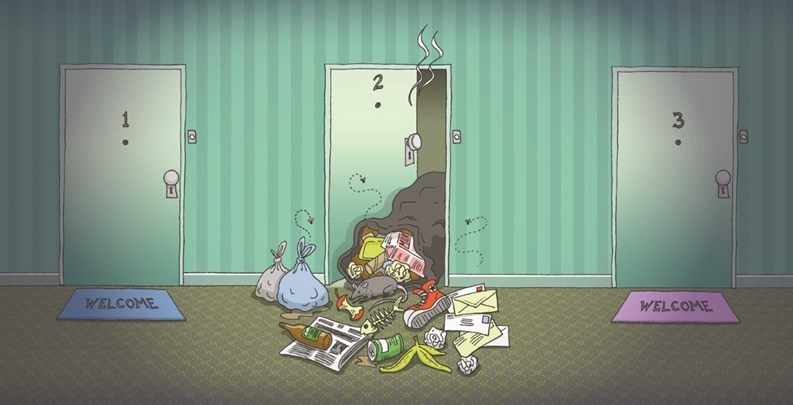 Probably ever since the first hominids shared a wall between their adjacent  caves, neighbors have complained about each other. Modern multifamily housing  dwellers are no different. Residents may even sometimes feel like their  situations are something out of a movie (consider Mrs. Connelly from 2003’s Duplex for a shining example) and the solution may seem nonexistent.

While the definition of an objectionable neighbor varies from tenant to tenant  (of course, we hope your neighbor is not actually a con-artist trying to push  you out of your dwelling), dealing with irritations and sometimes bigger  problems can get tiring for both the tenant and management. Thankfully there  are ways to address problems from simple neighborly bickering to bigger issues  that affect the entire building.

“People have different degrees of sensitivity,” says Gerard Picaso of management firm Gerard J. Picaso Inc. in Manhattan,  adding that what may drive one person nuts won’t necessarily bother another. He says he’s had plenty of residents who move into a unit and complain about a neighbor  when the previous tenant had never said a word.

“In every set of building bylaws, there is a provision that states each resident  has the right to 'quiet enjoyment' of the property,” says Gregory Cohen of Queens-based Impact Real Estate Management, adding that  in addition to water leaks and cooking smells, noise is by far the biggest  complaint his office gets from residents.

“For example, some elderly residents can’t hear their televisions, so they keep them at a higher volume,” he says, which can generate complaints from adjoining units. But noise  complaints, Cohen points out, can range anywhere from wild parties to neighbors  without enough carpeting on their floors.

Belongings left out in the hallways are another common complaint, says Picaso.  Strollers, shoes and bicycles are not only an inconvenience to neighbors, but  are also a fire hazard when they block pathways and interfere with a speedy  evacuation if the hall is filled with smoke.

Your neighbor's fondness for frying up garlic-crusted fish-sticks and keeping a  pile of running shoes outside his or her door notwithstanding, some situations  can arise that take the definition of a bad neighbor to a whole new level.

“We get our crazies,” says Cohen, mentioning one particular instance where a female resident  repeatedly defecated in the hallway of one of his buildings. After many  unsuccessful attempts to curb her behavior, Social Services was called. She  ended up paying $10,000 in fines and eventually her unit foreclosed.

“A lot of these problems can be solved by speaking to your neighbor,” says Cohen. “We try to deal with them one-on-one and get it fixed and resolved.”

He cites one example of a resident who complained that their neighbor’s fridge was right against their bedroom wall and the humming noise of the  fridge kept them up at night. The neighbor didn’t even realize there was a problem. Shifting the fridge solved the issue easily.

“We’ve had cases where we’ve persuaded people to buy earphones for their televisions, or put more  carpeting in,” he says. “It just depends on what the problem is.”

Cohen says it’s always better to talk it out first because, “A lot of people may be offended if the managing agent just comes in with an  order.” Additionally, he points out that it’s hard for a managing agent to know for certain that the complaints are  warranted.

“If a resident complains about noise emanating from another apartment at 2 a.m.,  how is the managing agent supposed to know?”

“Since two neighbors fighting is usually over a quality of life issue, such as  noise or smoke, it is very difficult for the board to resolve those issues  because one neighbor will deny that there is a problem,” he says. “In those cases, we ask the complaining neighbor to provide proof that there is a  problem, such as calling a building staff member or a board member to the  apartment to hear the noise or smell the smoke.”

Picaso adds that the option of calling management and boards should be used with  consideration, though. “Board members have lives and you shouldn’t be pestering them on nights and weekends,” he says.

Can’t Talk It Out?

Not all problems and issues can be talked out and ended with a friendly  handshake. In those cases, the path for a solution gets a bit more formal.

Eric Zim, an attorney with Manhattan’s Horwitz & Zim Law Group P.C. suggests submitting all inquiries and complaints in writing.  “A phone call is good, but it can’t be recorded,” he points out.

The first person to approach is the building manager or managing agent, says  Saft. “The first line of defense is asking the manager to look into the specific issue.  If the issue isn't resolved, the board will have to get more involved.”

For his part, Cohen prefers that the board stay out of the conflict as long as  possible though, as they can be held legally liable if something goes wrong. He  adds that his buildings have a schedule of penalties that order tenants to  cease and desist and or pay a fine. With each violation the fine escalates, and  if the violations persist, the issue is eventually brought to court.

Saft agrees, adding that “Frequently, the board doesn't want to take sides or doesn't feel they have the  ability to resolve the dispute, so the fighting neighbors get a letter from me  suggesting that they call the mediator.”

However, Zim points out that alternative dispute resolution can sometimes be  limiting, as many times the compromises are non-binding and enforcement is  difficult.

If the problem still can’t get resolved, legal action can be taken.

“There are just some people who won’t respond until they're threatened with legal action,” Picaso says, allowing that the problem does frequently go away if legal  pressure is brought to bear. “To defend themselves, shareholders have to start paying money,” he says. “It’s easier to just not play music at 11 pm” That being said, Picaso strongly advises against waving a lawsuit around unless  you're serious about pursuing it. In other words, don't bluff.

A lot of the difficulties in enforcing a peaceful environment for residents come  from the lack of communication or responsiveness on the part of building  administration, says Zim.

“From the board member’s perspective, every issue brought up by a shareholder needs to be addressed,” he suggests. “Respond to the issue at hand promptly and effectively. Communicate clearly. When  someone doesn’t respond to the issue, shareholders get nervous – or mad.”

Zim says that when a managing agent does their job correctly, they are more hands-on and are in a better position to  help settle a dispute. Someone detached from the community and unaware of an  ongoing conflict would be hard-pressed to contribute meaningfully to the  solution.

Same goes for board members. It’s also good to have board members kept up to date about the goings-on in their  own building community, Zim says. “They should be heavily involved in the day-to-day stuff because it’s their asset.”

Picaso agrees, adding that a good board is well informed and will set up  meetings to fix problems. “A good board will meet the problem head on,” he says. “They’ll get all the complaints in writing, give copies of all the rules and  procedures so that shareholders know why there’s a problem. A bad board will just ignore it, which will lead to residents  setting up legal action.”

There is a broad array of educational and informational resources available to  both managers and board members, say the pros, including The Cooperator and its  annual Co-op & Condo Expo, which includes educational seminars and other opportunities to get  informed.

Another opportunity, according to Saft, is the Council of New York Cooperatives  and Condominium's (CNYC) annual conference, held every November at Baruch  College and offering seminars on topics of interest to co-op and condominium  boards. Other organizations offer seminars and classes at various times  throughout the year.

“I have come to realize that shareholders and unit owners frequently take their  other issues – work, family, money, general unhappiness with their lives, what have you -- out  on the board,” says Saft, adding that a sense of entitlement plus a measure of influence can  make a challenging personality downright impossible to deal with at times.

“Often, the result of this mixture is that a difficult resident uses some minor  issue to get onto the board, and creates havoc at board meetings – and the board members with real lives resign or refuse to run again. The result  is frequently a non-functioning board and a suffering building.”

In the end, the pros agree that managing the people in a given building is every  bit as important as maintaining the building structure itself. An ongoing,  toxic relationship between residents can be just as corrosive as a long-running  water leak, or an inefficient boiler. By identifying the problem and taking  decisive steps to resolve it – whether through penalties, the prospect of legal action, or mediation – building administrators can help resolve the issue quickly and restore balance  to their community.

Bernadette Marciniak is a freelance writer living in New Jersey.