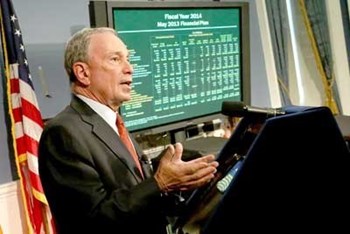 After nearly twelve years in office Mayor Michael R. Bloomberg is poised to  leave office on December 31st of this year. One of his last acts as mayor of  immediate and possible long-term impact is adoption of a final budget for the  upcoming 2014 fiscal year.

Mayor Bloomberg and City Council Speaker Christine C. Quinn, who is a mayoral  candidate herself, reached agreement June 23 on an executive budget plan that  calls for $69.8 billion in spending, with no tax increases or cuts to essential  city services.

In proposing the budget back in May, Mayor Bloomberg lauded his fiscal plan as  being devoid of tax increases or major service reductions. He said the budget  was balanced as well. “Responsible management of the budget has allowed us to increase education  investments so our public schools continue to improve, and investments in  economic development have diversified the city’s economy and spurred job creation, generating new revenue streams for the city,” Bloomberg said in a statement. “But even with our fiscal discipline, the costs we cannot control without help  from our partners in labor and in Albany continue to siphon money away from  services and remain a long-term challenge. Until we make meaningful reforms to  our healthcare and fringe benefit programs, the services that have dramatically  improved the quality of life for New Yorkers will be left to either compete for  a smaller and smaller share of the city’s budget or rely on significant tax increases that will halt our economic growth  and competitiveness.”

The mayor reported that the budget was balanced through billions of dollars in  agency savings actions and increased revenues from the city’s economic growth, benefiting from a more diversified economy led by the tech,  film and television, tourism and higher education sectors.

“Over the past eleven-and-a-half years, we’ve faced some of the most difficult fiscal challenges our city has ever seen—post 9/11 and during the global recession that began in 2008,” Mayor Bloomberg said in a statement. “But as cities and states across the nation experienced large-scale layoffs and  severe service cutbacks, our own fiscal discipline and pro-growth economic  strategies prevented that from happening here and helped pull New York through  those difficult times—most recently, coming out of the recession faster than any other place in the  nation. Our administration’s final budget reflects the commitment to sound financial management that has  helped keep our city on firm financial footing, and to the services and  programs New Yorkers rely on. I want to thank Speaker Quinn for her effective  leadership, as well as the council members for their work.”

“This budget process should serve as an example to our colleagues in government  throughout the country, that if you focus on delivering and check the  grandstanding at the door, you can accomplish a great deal—and that’s what this is all about,” said Speaker Quinn. “While the council and the administration came into this budget with different  priorities, we both had a willingness to negotiate in good faith and in the  end, arrived at a budget without the bickering and confrontation that is  unfortunately too often associated with government.”

“We came a long way over the course of this budget process. This year, our city’s finances were faced with two primary obstacles—one natural, Superstorm Sandy, and one man made, the federal sequestration,” said Council Finance Chair Domenic M. Recchia, Jr.

The FY 2014 budget remains balanced without increasing relying on more than $6  billion in savings for FY 2014 generated through 12 rounds of deficit closing  actions taken by city agencies since 2007.

A total of $58 million has been allocated for New York City’s Housing Authority (NYCHA), replacing some of the federal funding lost as a  result of sequestration. The money will be used to support NYCHA’s core mission of providing public housing while helping to maintain senior  centers and other community programs. The city will also provide approximately  $13 million to the Department for Youth and Community Development and the  Department for the Aging to begin to plan to provide services to NYCHA  residents.

The budget also features strong support of cultural institutions including  increases in funding to the city’s library system, which will allow for, on average, more than five days of  service throughout the system.

The FY 2014 budget includes $250 million for resiliency measures detailed in “A Stronger, More Resilient New York,” the comprehensive report on steps that New York City should take to protect  against the impacts of climate change. Approximately $100 million will support  high-priority investments for city agencies and the remaining $150 million will  fund resiliency projects, including:

• $47 million for coastal protection improvements on the East Shore of Staten  Island;

• $19.7 million to expand blue belts in Staten Island; and

• $3.3 million in matching funds for Federally-funded ferry landing in the  Rockaways.

Other changes include debt service savings of approximately $200 million in FY  2014 primarily by taking advantage of low interest rates. Also, by virtue of a  New York State Court of Appeals ruling on livery cab services, the city should  see additional revenues coming in by the sale of 2,000 additional medallions  for wheel-chair accessible yellow taxicabs. The decision should generate  approximately $1.4 billion over the next few years, beginning with $300 million  in estimated revenue in 2014.

Although balanced, there remains a budget gap of approximately $2 billion in FY  2015—a slight decrease from estimates in the May budget plan.

When asked how he felt presiding over his last budget after 12 years in office,  Mayor Bloomberg refused to wax sentimental. "Let's keep focusing on the city  budget and what we have together all been able to achieve," he said briskly.

Liam P. Cusack is the Associate Editor of The Cooperator.