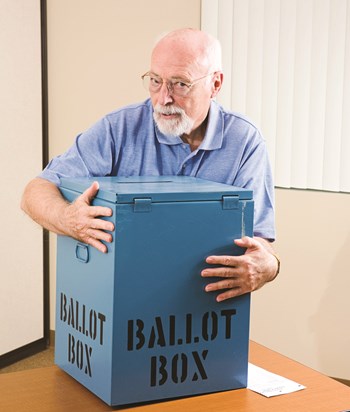 Every co-op, condo, and HOA must elect a board of directors to oversee the community’s finances, physical maintenance, and other day-to- day operations. While board elections don’t rise quite to the level of a state or even local election in terms of gravitas, an apathetic or inept board can profoundly impact the cohesion and quality of life in a given building or association— and a truly bad board can run a community into the ground. Given the high stakes, it’s crucial that board elections be carried out properly and fairly. How can board election fraud be prevented? And how it can be detected—and corrected—when it does occur?

The issue of widespread election fraud in condominiums and HOAs came to the forefront recently in Florida when it was discovered that at least 30 percent of the common interest communities in Miami-Dade County regulated by the Florida Department of Business & Professional Regulation (DBPR) were the subject of complaints or were actually being investigated for committing some kind of election fraud or administrative irregularity.

In an investigation by The Miami Herald and Univision, multiple HOAs in Florida were accused of forging ballots, casting duplicate ballots, intimidating owners to change their proxies, and attempting to cover up the voting irregularities.

Before we delve into the muddy waters of fraudulent elections, we must first understand how the election process is supposed to work.

“Almost every community association that I’ve dealt with or represented has a provision in its bylaws that dictates and spells out that there shall be an annual meeting at which the directors, (if it’s a homeowner’s association or a co-op), or the members of the board of managers (if it’s a condominium), are elected,” explains Marc Schneider, Esq., founding partner of the law firm of Schneider Mitola LLP, which has offices in New York City and Long Island. “And it usually spells out some of the procedures for doing so, such as the amount of notice that you have to give to the residents [that an election is upcoming]. For example it might say something like, ‘not less than ten or more than thirty days.’”

One way an election could be rigged, then, is by skipping the annual meeting—sort of like how dictators of banana republics decide to not have elections, or postpone them indefinitely. If your building hasn’t had an annual meeting in the last 12 months, there may be an issue.

To avoid the appearance of impropriety—and to ensure that there is a quorum—the details of the annual meeting should be communicated well in advance, and more than once.

“It’s very important, particularly for amendments where the quorum requirements are fairly high, that people know when meetings are going to happen as far in advance as possible,” says Scott McKeel, president of Vote HOA Now, a national company that specializes in online association voting. “In my experience, the problem is a lack of communication from the manager’s or the board’s standpoint. It’s one of the biggest reasons for not meeting quorum requirements. There are certainly a lot of communities that just won’t participate no matter what, but in general, communication is good.”

The board must take the lead in promoting the election, but, ideally, not be involved in the actual tallying of votes. “In our opinion, the board and management should let all residents know that an election is coming up but, as far as we are concerned, they should not be involved in the process,” says Brien Gittens, director of The Voting Group, a company based in Queens Village. A rogue board member could rig an election if he or she were in charge of counting the ballots. “The Voting Group handles the mailing of the election package to all unit owners which includes, all notices, voting instructions, candidates bios (if requested), all ballots and proxies. The Voting Group also receives all completed ballots/proxies or online votes either by mail or in person. This preserves the integrity of the election process by removing management and the board.”

Holding annual meetings, and making sure unit owners know about the meetings well in advance so they have the opportunity to vote, are two of the simplest but most important ways of avoiding election fraud. But elections, when they are stolen, are usually done so by other, more subtle methods.

Most buildings have a process in place whereby unit owners can vote without having to be physically present at the meeting. Sue in 2B might decree that Jeff in 7A will cast her vote for her. This is called voting by proxy.

“The other thing that a lot of community associations do now is that they will actually solicit the candidates for those seats in advance, establish a deadline so that when the notice goes out it will tell people who the candidates are and they can then prepare the appropriate proxy, so that people can vote on that proxy,” says Schneider. “They can vote on that document for the candidate of their choice, as opposed to somebody getting up and being nominated from the floor and people don’t know who’s running. And then you don’t necessarily have everybody that’s there, and you might wind up with the election’s outcome being very different than what they might otherwise be.”

The proxy system is a wonderfully convenient and fair way to meet quorum on votes. But it is the main avenue by which elections may be rigged.

“The most common way to prevail in an election is through the use of proxies, general proxies,” says Schneider. “And that’s why I like to use what I call the ‘proxy ballot’ because it gives people the opportunity to vote for the candidate that they want.”

It is also the most common way of rigging the election. “Forging signatures,” says Gittens. “Signing proxies for unit owners that are not available—deceased, or out of town.”

“I actually had a co-op where they used a proxy ballot, and the person who collected the ballots from the individuals decided that it was their prerogative to change the votes that the people cast on the proxy ballots,” Schneider recalls. “And it was very apparent, the evidence, so it was caught on the night of the election when all of the documents came in. Obviously the election had to be adjourned and re-voted.”

There are different ways to use proxies. “You can have a general proxy and that gives the person that you give a proxy to the right to vote for whoever they want,” Schneider says.

“But if you have a directed proxy, or proxy ballot, where the person is giving specific instructions to the proxy holder to cast their vote in a particular manner, you can’t change it.”

With proxies, as with wills, the most recent is the only one that counts. One could, after submitting a proxy vote, show up at the actual election and vote a different way, and that is what would count.

On its face, rigging an election for board seats on a co-op or condo board—seats that, sometimes, no one even wants!—may seem trivial. But board members of co-ops and condos, especially the bigger buildings, hold the purse strings to a very well-stocked purse.

“The wrong type of person can be elected to the board if there is election fraud,” says Gittens. “That person can either be incompetent or dishonest. If someone went to the trouble of rigging an election more than likely there is some dishonesty there. This could lead to mismanagement of funds, or embezzlement, which can lead to higher assessments and a host of other problems.”

Thus, safeguarding the integrity of the voting process is paramount. One way to ensure good votes is to hire an outside service, such as The Voting Group or Vote HOA Now, an online voting system designed for HOAs.

“For each community, we set up a voting website that has its own database with it,” says McKeel. “It can be used for smaller communities; the smallest one we have is about forty  homes. I think the largest one we have is about ten thousand homes.” Online systems have several distinct advantages. “First off, everybody these days wants to be able to vote through their phones and computers, so you get people who won’t show up at the meetings, who won’t participate, who might not even take the time to fill out a paper ballot and return it. I mean, that takes work, right? You gotta walk it to the mailbox. So voting online like this takes them a couple minutes.” With online voting, he says, managers know they are making quorum nine times out of ten, before they even get to the meeting.

“The other advantages are that the voting results are accurate,” says McKeel. “There’s no recounting an electronic vote because the computer does the math, and it doesn’t make a mistake. And it’s harder to commit fraud with the electronic voting. If somebody wants to stuff the ballot or sway the board, or sway an election… most HOA paper ballots or proxy ballots are just forms that can be copied and reprinted out. So it’s pretty easy to send in forms that aren’t necessarily yours.

And another big problem I’ve heard about with some elections is that you might have a board in that wants to stay in. So they’ll go around and collect proxies from people, and use intimidation. So with the electronic voting, you kind of take that away,” McKeel says. “And there’s no stuffing the ballot box, because every homeowner has to have a unique registration code. So if somebody were to give their registration code out, similarly to someone collecting proxy forms, the person who uses them would have a separate email address, and if they didn’t the email failure messages would alert us to the fact that this is going on.”

Transparency is the watchword with local elections. If a board is doing its diligence, it should take no umbrage with letting its constituents in on every step of the process. And when considering a new method of voting, be that electronic or otherwise, a board is advised to seek recommendations from similar associations, to best ascertain which third-party service or system is most secure for its needs.