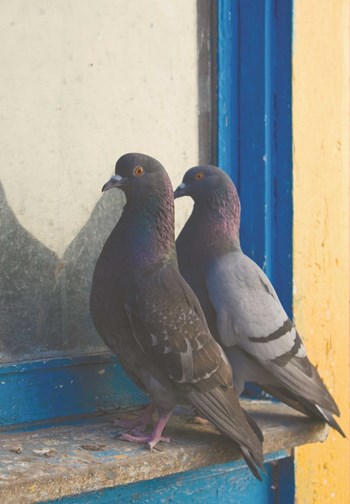 Believe it or not, pigeons are related to doves (both hail from the columbidae  family of birds) but to many co-op and condo buildings, the former are not at  all symbolic of peace. Quite the contrary. Although rats, mice, cockroaches,  and now bedbugs get most of the bad press involving urban pest animals, pigeons  are pests, too, perching on any overhanging surface, cooing and chirping and  leaving pigeon-fluff and droppings everywhere.

An overabundance of birds result in more than just a messy, unsightly situation;  if bird waste accumulates on air vents, window-mounted air conditioning units,  or intake grates, building residents may be at risk for a number of extremely  unpleasant—even life-threatening—parasitic ailments.

The Grey Bird of Messiness

Even a city like New York teems with avian life. But for all the bevy of birds  in the five boroughs, pigeons are the ones that cause the biggest headaches.  But why pigeons and not geese for example, or finches, or barn swallows?

The first reason is that, like many native New Yorkers, pigeons don’t like to leave. “They don’t migrate,” says Heath Waldorf, vice president of Bell Environmental in Parsippany, New  Jersey. “Lost of other pest birds migrate—geese, blackbirds, sparrows. But pigeons are here all year round.”

The species of pigeon in New York, Waldorf says, originated in England, where  they perched high on the famed cliffs of Dover. This is another reason the  birds love New York: the high-rise buildings remind them of home.

The third reason is that city life is easy for pigeons. “They have harborage, and they have food—and that’s what birds need,” says Arthur Katz, president of Knockout Pest Control in Uniondale. “There’s plenty of that in New York—plenty of places to live, roost, and feed.”

Just as vultures are adept at finding and devouring fresh road kill, so Gotham's  pigeons are uncannily good at locating food. They’re social, Katz says; if only one side of a building faces a street, that’s where the pigeons hang out. “They like to sit on the side of a building where there’s traffic,” he says. “They like to watch people. They watch for them to drop food.”

And as anyone who’s ever set foot in Central Park well knows, pigeons don’t exactly shy away from people. In fact, they can get right up in your face.  Just like New Yorkers.

“They’re a bird of opportunity,” says Tom Jordan, head of the bird control unit at Arrow Exterminating Co., Inc.  in Lynbrook. “People feel bad for them and feed them.” Pigeons know where to go to find these generous feeders. “They make their rounds.”

And just like New Yorkers, pigeons make do with less-than-ideal living  conditions. “They’re adaptable to anything,” Jordan says. “Other birds will only nest in the highest part of a tree. Not pigeons. Pigeons  will nest where they land.”

Pigeons are not rats or cockroaches, and it could be argued that they provide a  bit of color to the cityscape. (In London’s Trafalgar Square, the massive concentration of pigeons is a tourist  attraction!) The problem is, they are feral animals, and therefore can spread  disease.

“Their fecal material carries numerous diseases,” Katz says—(40 of them to be precise, adds Jordan). Whatever your feelings on the old wives’ tale about having a bird do its business on you being lucky, when you have a  hundred birds perched over the front door of your building, the volume of said  fecal matter becomes a health issue.

Worse, if the pigeons hang out near the AC units, their droppings can get in the  vents, which has the potential to deliver dangerous germs and microbes directly  into your building's breathable air. This means that the vents need to be  sterilized—an expensive proposition in the best of times.

And there’s the aesthetic concerns. A gorgeous façade becomes not quite as gorgeous when it’s covered in bird poop. Silly as it may seem, this can have an impact on the  bottom line. “What’s the value of an apartment if I go to sell it, and the balcony’s covered in pigeon droppings?” Waldorf muses.

At some point, it becomes more expensive to clean up bird droppings than it  would to hire a professional to come in and evict the avian squatters making  the mess. So how do experts get rid of the birds?

“Food, sun, shelter,” explains Waldorf. “Figure out the reason they’re there for, and eliminate it.”

That's often easier said than done. Unlike the popular perception of their  cousins—the doves, pigeons are not docile. They are slow enough to get out of your way  when you’re about to trip over them on the sidewalk; convincing them to abandon the cozy  confines of your co-op or condo can be extremely challenging.

The first thing you can do—and a building can do this without hiring an expert—is curtail their access to food. “Get rid of the feeders,” Waldorf says, referring not to the little houses hanging from tree branches on  suburban lawns, but to actual people who take it upon themselves to scatter  feed or bread-bits for the neighborhood pigeons. “When you can identify who it is with the big bag of birdseed,” he says, “make them stop.”

That will help somewhat—every little bit does—but the larger problem of evicting the pigeons from the premises remains. The  key here is to prevent them from accessing the places they favor.

“Exclusion,” Jordan says, using the industry term for keeping birds from the places where  they congregate and cause trouble. “Ninety-five percent of the time, netting is the way to go.” With the only route to a roosting space blocked off by nets, pigeons have no  choice but to look elsewhere.

As for perches—especially air conditioning units that protrude away from the side of the  building—one method is to put spikes along a place where the birds like to sit, making it  uncomfortable to rest there.

Effectiveness aside, Jordan points out that nets and other modifications might  be prohibited under a specific building's by-laws—a board should research this before signing on with a company to make sure  they're not engaging a service that's against their own rules and regulations.

Another option is electricity. “When the birds land, they get hit with a little shock,” Waldorf says. “It doesn’t kill them—let’s be clear on that. But it definitely makes them think about looking elsewhere.”

Then there are methods designed to fool the birds. For a mere $4,500, you can  buy a kite that looks like an eagle—one of the birds of prey who feast on pigeons—to fly in circles overhead. The terrified pigeons will see the “eagle” and dive to the ground for safety and cover.

Even scent can be used as a deterrent to feathered pests. A pigeon lands in a  certain location and is greeted with a blast of grape-scented (but non-toxic)  mist. Because pigeons have large nostrils, the scent is particularly unpleasant  to them, and they tend not to stick around—unless they have fledglings or eggs. Then they will stay, grape-stench  notwithstanding Jordan says, but only until the young birds can fly away on  their own. The catch? While the scent method is effective and doesn’t affect the aesthetic of a façade the way nets and spikes can, it is still illegal in New York.

The bird management method a given building ultimately uses depends on the  set-up of the building. Waldorf, Jordan, and Katz all insist that there is no  single, one-size-fits-all way to get rid of pigeons; the method is dependent on  the topography. A hi-rise with a big courtyard is a different project than a  smaller building with lots of exterior nooks and crannies.

“There’s nothing standard,” Katz says. “I’ve done hundreds of exclusion jobs. Almost all of them are different.”

In the end, and over time, the exclusion does pay for itself.

“It’s usually less expensive than the constant maintenance of cleaning of bird  droppings would be,” Katz says.

And it takes drastic measures to keep the birds away. Even the “eagle” kite, terrifying though it is to the birds, has to be used consistently and  correctly to be effective. “With pigeons, you have to be very, very persistent,” Jordan says. “With geese, after a week straight, they’re not coming back.”

But pigeons? “They don’t take a hint the first time,” he says. Just like true New Yorkers.

Greg Olear is a freelance writer, novelist and a frequent contributor to The  Cooperator. 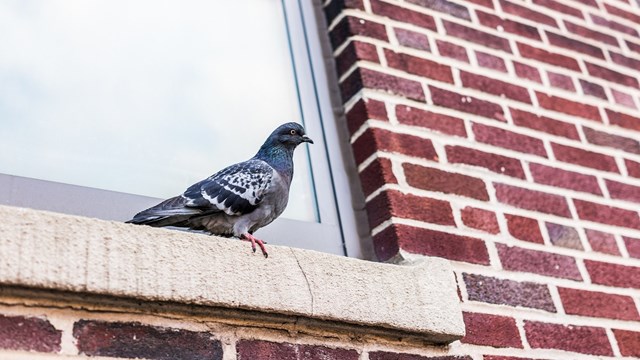 The Bird Is the Word

Dealing With Avian Intruders at Your Condo or Co-op