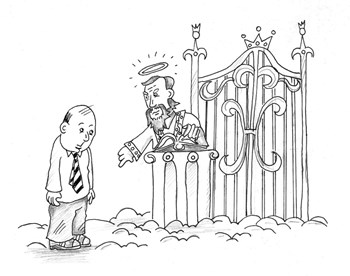 When the author of this story bought her home, she sat in disbelief when the lawyers handed her the last paper to sign—the one that confirmed she signed all the other papers!

The confusion wasn’t surprising; the home-buying process is known for being tedious and overwhelming, but nothing prepares you for the mountain of paperwork involved. Once you decide to buy a home, there are agreements with your real estate agent to sign, mortgage loan applications to fill out, multiple copies of financial accounts and other statements to obtain, and paperwork to sign when you bid on the property—and that’s not even counting the pages and pages you’re presented with at the closing.

If you are buying a co-op, however, be prepared to add yet another layer of tree-pulp onto this already-vast mound of paper. It’s up to a co-op building’s board/ management team to make sure that anyone expressing the intent to purchase an apartment in their building has enough financial wherewithal to not only make the purchase, but to pay their maintenance fees and taxes on-time into the foreseeable future. How do they do that? They will request an exhaustive amount of financial documentation—everything from tax returns to credit reports, investment income statements, pay stubs, letters from accountants, net worth statements, and more.

“First time co-op buyers are taken aback by the financial scrutiny that co-ops employ because they feel it rises to the level of privacy invasion,” says Stephen W. O’Connell, a partner with the Manhattan-based law firm of Hartman & Craven LLP. O’Connell says, however, that the typical board’s rationale is that their building’s financial security is at risk, and admitting residents who may then fail to pay can cause existing shareholders serious monetary damage.

That doesn’t mean that the ideal financial tenant for a million-dollar co-op apartment is someone like wealthy heiress Paris Hilton, whose bank account many of us envy. Although we don’t have Ms. Hilton’s assets or credit report, let’s fictionalize and assume that her wealth comes from trust fund distributions set up by Mommy and Daddy Hilton. If that’s the case, some of her wealth may be tied up in investments. She might also be overextended financially with mansions in the Bahamas, Vegas, Sydney, Australia and Tuscany, Italy. And, other than showing up on the red carpet occasionally and being a rock star’s girlfriend, it doesn’t seem that the young Hilton holds down a consistently paying job. Add in a few credit dings from her less-than-sedate youth and a co-op board might well stamp her application with a big red NO.

The ABCs of Applications

While all this documentation for your prospective co-op board sounds eerily similar to the paperwork you provided for your mortgage application, what you will actually have to produce for the board depends on the individual building.

“It varies from board to board,” says Syed N. Haque, CPA, who owns his own accounting firm in Rego Park. “Some boards will ask for credit reports, and some don’t. Some ask for references, and some won’t. It’s different than buying a condominium too. When you’re buying a condo, all you need to show is that you can get a mortgage—or pay cash—and you buy in.”

Gathering your paperwork isn’t a job for Superman. The responsibility falls into the lap of you, the buyer, to gather all the necessary documentation that the building will need. You should also have a knowledgeable broker working on your team who knows what all the buildings’ requirements are and will help you navigate through the process with minimal drama and delay.

If everything checks out fine, you’ll move forward toward closing. If any red flags are raised, you will either be asked for further documentation … or the board may exercise its right to decline your application outright.

“Both sellers’ and buyers’ brokers have an incentive to push only doable deals,” says Robert Tierman, a New York co-op/condo lawyer with Litwin & Tierman PA, based in Manhattan and Hackensack, New Jersey. “After all, they invest a lot of time showing apartments and dealing with contract negotiations and applications packages—and they only get paid for deals that close. If they regularly present unrealistic deals, they likely will not get hired—especially by sellers looking for the quickest, cleanest deals possible.”

Your team may also include your accountant, who may assist you in providing additional financial documentation, and your attorney who can answer any legal questions you may have.

When it comes to co-op applications and your income, the boards are going to want a lot more detail about where your dollars are coming from, as well as where they are going. Returning to our Paris Hilton example, her income may be significant, but if it largely comes from her own Daddy Warbucks, and she doesn’t generate much in the wages department on her own, this is a huge consideration in the board’s decision-making process.

“If you’re a trust-fund baby and this is where all of your income is coming from, how does the board know where your income will come from if the distributions stop?” says Sandra Jacobus, a partner at the Manhattan-based law firm Ganfer & Shore LLP. “It’s the same thing if you’re coming in from a regular job and you get a bonus each year. Can you count on that bonus each year? What’s the continuity of income?”

While the lack of income continuity can be a huge red flag, there are several more items that might give a board to pause, should they crop up in your financial paperwork. One such flag is an extreme swing in your balances: when all of a sudden your historically stable account gets $200,000 richer. While this might sound like you’ve suddenly hit it big and you’re riding the approval train from the board (since paying the maintenance charges will be a snap now), this significant chunk of change appearing out of nowhere may actually be a cause for concern to the board.

“Typically this indicates a loan from a family member, and it’s done to give the shareholder the appearance of having greater financial stability than they actually might,” says O’Connell. “Severe swings of balance are a bad sign because the economic picture is not as stable as you would like.”

There’s also the issue of salary fudging: During the interview process, a prospective buyer might tell the board that his or her job brings in the bucks. Unfortunately, their annual reported income is more than what appears on their tax return. According to Jacobus, that applicant may have just fudged their way into a rejection. “Often this happens with people who are self-employed or work in service industries,” says Jacobus. “This is because of cash they don’t report.” If, however, you are self-employed and can somehow prove through copies of canceled checks and other evidence that you really are bringing in the bucks (perhaps you have a lot of tax breaks), your rejection might be reversed on appeal.

An applicant’s debt load is another important point that boards consider. Most of us have some debt, but too much debt might mean that you’re spreading yourself too thin—something that holds true even for the high-income folks. “There could be a lot of preexisting mortgages,” says Jacobus. “But it’s a bad sign if someone has to sell a prior home or piece of property before they can afford a new purchase.”

A final piece of an applicant’s financial puzzle is a scan of their financial references. An applicant might claim to have made all maintenance payments and assessments in their previous building on time and in full, but a quick reference check to any previous building can verify (or disprove) that assertion. Bottom line: the truth will out, so it doesn’t pay to lie.

The red flags mentioned above are certainly concerns, but having one or more of them lurking in one’s financial vitae doesn’t automatically guarantee you’ll be back at square one, looking at apartment listings. Most often, boards will come back to an applicant with questionable items and ask for additional information or documentation.

Remember the sudden $200,000 windfall that appeared in the potential buyer’s account? Well, maybe it’s not a loan from Aunt Fannie, but a regular trust disbursement that will continue for the next 20 years. The disbursement guarantees the ability to pay maintenance fees and, therefore, this buyer would likely be welcomed to the building if the board took the initiative to ask.

“Sometimes it’s a simple explanation, and the boards just have to ask why,” says Jacobus. “Usually most boards will ask questions when something doesn’t seem right.”

Although the board may ask for additional proof of financial worth, some individuals have actually refused to provide the documentation, feeling that the board has enough information to make an informed decision. Refusing the board’s requests doesn’t mean an automatic rejection either.

“There is a lot of resistance, especially from high-net worth individuals as to how much information they should have to give before it becomes a privacy issue,” says O’Connell. “Let’s say for example that the buyers are worth $500 million and the threshold to living in the building is $10 million. The buyers may just have to provide a letter from their accountant verifying their income level, liabilities and assets, and that may be adequate for the board that had questions on their income.”

If you jump through the hoops set before you, provide additional information, and lay your finances bare and are still rejected, unfortunately there isn’t much that can be done.

“A buyer only has recourse if he can show that the board violated anti-discrimination or other laws in dealing with him,” says Tierman. On the other hand, he says, “a seller can allege that the board exceeded its rights under the proprietary lease and the co-op’s other governing documents in reviewing the application and rejecting the applicant. While the board has substantial discretion in doing so, its rights are not limitless, and if it wrongfully deprives a seller of the opportunity to sell, the seller is entitled to any profits that it might lose as a consequence.”

Is there such a thing as a perfect financial picture? Not necessarily, but if you meet certain financial criteria for, let’s say a $1 million co-op apartment, boards would have tough time turning you down.

“[The ideal buyer] would have a projected post closing debt-to-income ratio of no more than 25 to 30 percent,” says Tierman. “Liquid asset requirements vary widely, given how stretched people generally are buying their $1 million ‘starter’ apartments, and may include the cash invested in the apartment itself, and can be bolstered—with a parent’s personal guarantee, for example.At the very least, assets equal to a year or two of carrying charges would be required.”

The bottom line to getting approved is to watch your bottom line, get your paperwork in order early and if there are any concerns, address them thoroughly in a timely manner. Before you know it, you’ll be cresting the top of the paperwork mountain, heading into homeownership.