Do not show again [X]
By Stephanie Mannino   2009 August Insurance 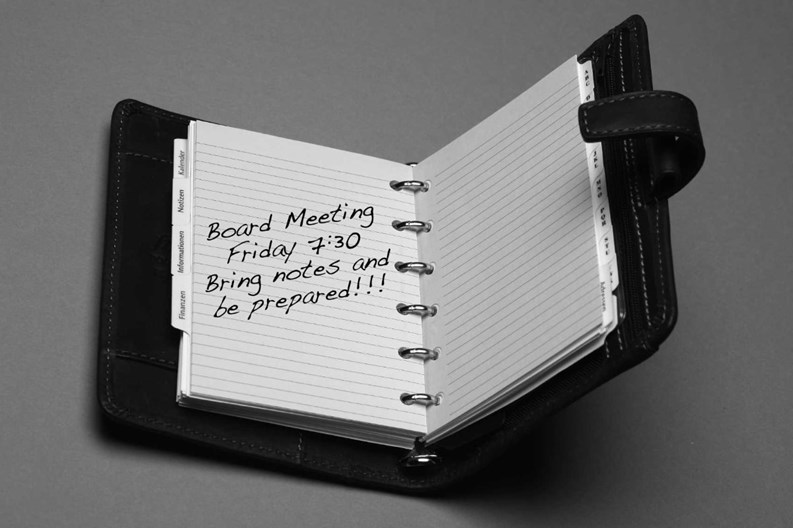 Inefficiently-run board meetings are time-wasters that can make even the most  enthusiastic board member cringe at the thought of an upcoming session. By  contrast, a well-run board meeting can be a productive hour or two that  benefits the entire building. Here are a few tips from the pros for getting the  most out of your meetings.

Preparing for the Meeting

Nobody should be heading into a monthly board meeting unprepared and uninformed.  Gone are the days when the board meeting served as the primary method of  disseminating information; today rapid communication is vital to staying up to  speed with building and board issues.

“In this age of e-mail, BlackBerry [devices] and the easy distribution of  information, board members are kept up-to-date weekly, daily, and by the hour,” says Mitchell Berg, director of management for Manhattan-based Maxwell-Kates,  Inc. “Years ago, board meetings used to be the culmination of all that had transpired  since the prior meeting. It was a forum for catching up on information. Today,  that is no longer the case.”

“Ideally, an agenda for a meeting is established a week prior to the meeting and  all pertinent information for effective discussion is disseminated at least a  few days in advance of the meeting,” Berg continues. “It is the role of the managing agent to provide each director or manager with as  much background information for each topic on the agenda in advance of the  meeting so the members are prepared.”

Preparation for the next meeting can begin almost as soon as the first one ends.  “The minutes of a completed meeting should be issued within a few days of the  meeting and comments, corrections and additions sought at that time,” says Berg. “The minutes, amended or as originally written, should then be recalculated with  the agenda for the next meeting. It is less than efficient for a member to read  the prior meeting minutes for the first time at the subsequent meeting.”

Good communication will not only keep all apprised of current situations, it  also ensures that meetings don’t run long. “Communicate during the month in the interim,” says David Baron, one of the principals of Metro Management, a full-service  real estate management company located in Long Island City, Queens.

“A lot of managers send a weekly package to board members, including updates,  projects and correspondence from accountants and attorneys,” says Baron. “Try to keep the board as well informed as you can. Package or e-mail summary.  Constantly keeping people apprised of what’s going on keeps meetings shorter because people are informed of what’s going on.”

It can be difficult to stay focused during the course of a board meeting. Often  the culprit is a lack of an agenda, which can present a real problem when  trying to conduct a meeting. Many other distractions, such as bringing up  personal issues—for example, problems with one’s own unit—can also cause a meeting to veer off track.

“A lot of times, one discussion leads into another, and sometimes discussions go  off on a tangent on an unrelated matter,” says Baron. “Sometimes issues are more of a personal nature, and as a result, a focused  discussion can move away from its intended topic.”

“By sticking to an agenda, you will deal with the issues of that month, and as  time permits, you can focus on non-agenda topics,” Baron continues. “I like to stay on-topic with agendas so things we need to decide are decided,  and things the board wants to cover are covered. A lot of issues come up after  the agenda is covered,” he says, noting that once the agenda is addressed, it’s OK to move on to other pertinent issues that might to at least be brought up  and discussed.

A strong leader is also essential in keeping meetings on track. Depending on the  building and the makeup of the board, either the board president or managing  agent typically fills this role.

“When the building has a managing agent, the manager who attends the meetings  should have a strong personality,” says Sam Irlander, the president of Parker Madison Partners, Inc., which  handles both commercial and residential property management. “He or she should orchestrate and guide the board toward a more efficient use of  their time, reminding them that they have a fiduciary responsibility to their  constituents, be they shareholders or equity holders in a condo. The interest  of others comes before their own interest as a board member.”

“It doesn’t really matter who leads the meeting as long as order is kept and the meeting  is maintained,” Irlander continues. “Sometimes there are certain board presidents who may have that approach. In most  cases however, boards rely on their manager’s experience in making building decisions. Running a building is like running a  business. If [board members] don’t have the expertise, they can certainly look to the managing agent.”

Berg concurs that boards and managers often collaborate. “A good deal depends on the personality and style of the president,” he says. “Some prefer to have the managing agent lead most of the meeting while some  prefer to be more actively involved. Also, the board treasurer is likely to be  in the forefront of any discussion concerning the building finances.”

Whether in the person of the board president or managing agent, strong  leadership skills are especially helpful when the board is made up of a larger  group of people. “When numbers grow to 12 or 15 people, it can be a more difficult group to keep  on topic,” says Baron.

And again, good organization is key. If you’ve already made a habit of communicating throughout the month, and consistently  keep fellow board members up to speed, it’s easier to avoid surprises and off-topic discussions at meetings.

“Board meetings are primarily to ratify decisions and to discuss final thoughts  leading up to a decision or a course of action,” says Berg. “Also, confidential issues not to be discussed via e-mail should be addressed in  a board meeting.”

A tight agenda will help a meeting run smoothly, and a productive meeting means  less wasted time on everyone’s part. Nobody wants to sit through a meeting that monopolizes his or her  evening.

“I think a well-run meeting should run two to two-and-a-half hours on average,” says Baron. “It could run three hours when invited guests are present, or if there is a long  agenda. But more than three hours is cause for reevaluation.”

Taking board members’ comfort and hectic schedules into account helps take some of the hassle out of  the meeting process as well. Whether you serve food or snacks at meetings is  largely dependent upon the time the meeting is held and your particular  building. For example, if the meeting is scheduled for early evening, and thus  right after work, board members might not have had a chance to eat. Serving  food might be helpful for those coming directly from work. However, if you are  not planning to have food available, you might schedule the meeting later in  the evening—say at 7:30 or 8 p.m. instead of 6:30—so people have a chance to eat and see their families.

“Have some snacks and something to drink, particularly if members are coming  right from work,” advises Baron. “We have some boards that bring in food, and board members become less hurried to  leave because they have eaten.”

Giving Everyone a Turn

Meetings are often the time when other board members or invited shareholders  expect to express their views or bring up a matter relevant to the building at  large. This can present a problem if everyone has something to say. A good  facilitator is integral in keeping order. But depending on your needs, Robert’s Rules of Order also might be an option for your board. For more information on  the last word in classic parliamentary procedure, visit www.robertsrules.com.

“Robert’s Rules of Order are administrative rules of order and etiquette,” says Irlander. “They are how one makes sure they have a chance to speak during a meeting and  give members a chance to bring up new business.”

When governing the operations of meetings, some societies and corporations often  use this set of rules.

“It is essentially a book of parliamentary procedure in clear, simple language,” says Michael Bogart, an in-house counsel at Maxwell-Kates. “Robert’s Rules can be used by a board to govern how the board operates its meetings. To  do so, you would need to pass a board resolution stating the same.”

If formalizing procedure isn’t your cup of tea, you might consider another approach to get everyone’s attention and get back on track. “I have one board that uses an actual gavel,” says Baron. “It’s a large board of 15 people, who sometimes have cross conversations going on.” A rap of the gavel has been an effective tactic for that particular board.

Meetings can take many different forms depending upon the building and its  needs. For example, a large building might have a large board, and thus be more  inclined to adhere to a more formal structure for their meetings. Smaller  buildings might have more informal monthly gathering. Still other boards might  decide to open up their monthly meetings to shareholders, in the interest of  transparency.

“Although smaller buildings may take on the form of a formal meeting, generally  speaking it becomes more of an intimate relationship with each neighbor because  of the size of the property,” says Irlander. “However, meetings should always run the same way, because whether large or  small, a corporation is a corporation, and as a corporation they are required  to have meetings and minutes.”

“Smaller buildings—typically those with 10 to 15 units or less—tend to hold slightly more informal meetings,” says Baron, “But it really runs the gamut. One board I know of has open board meetings that  go into executive sessions following the meeting. There are no true  hard-and-fast rules. A lot of boards are trying to deal with transparency  issues and try to develop a sense of openness by putting out newsletters and  having open meetings, things like that.”

Many different personalities and issues related to people’s homes can result in heated and sometimes personal discussions, and a  discussion can erupt into an argument. A tight agenda and a good leader will  keep almost any meeting on track, tough as it may be sometimes. Inevitably,  there will be times when issues take a personal tone—after all, people are discussing their homes—but if your board treats your building like a business, and runs it as such,  this emphasis will ensure that your meetings stay on course, with less time  wasted. 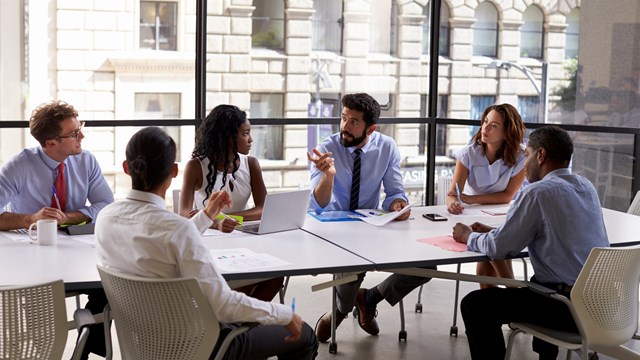