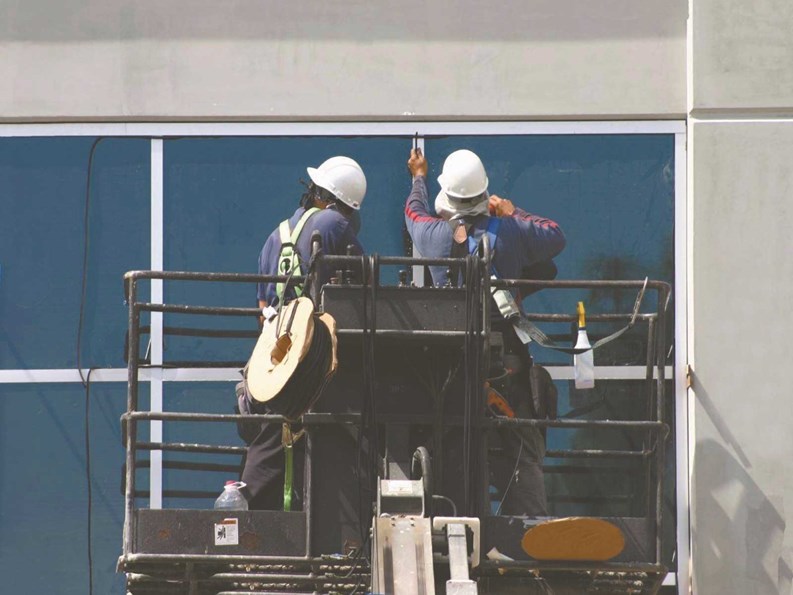 Doing a major window replacement or repair project in a building that’s home to hundreds of people isn’t easy. There are any number of scheduling and access considerations, and time  is obviously of the essence, as it’s impractical and unsafe to leave a gaping hole in someone’s wall for any length of time.

While most windows last for years, every building must, sooner or later, address  a window replacement project. Let’s take a look at what you need to know about windows before it's your building's  turn.

Unlike green roofs or high-tech security systems, windows are something every  operating residential building in New York already has. Human nature being what  it is—and the frugality of most boards being what it is—the tendency is to leave well enough alone. Why do we need new windows now? The  hue and cry is to “wait till next year.”

“When’s it time to trade in your car and get a newer one?” muses Jim Carrera, vice president of sales for Industrial Window Corp. in  Briarcliff. In other words, there’s no good answer. But there are signs to look out for.

When you have a water leak, when you have an air leak, that’s a sign that it may be time to replace the windows, says Henry Backer,  president of Accurate Windows in Dix Hills. “Or some units may have condensation between the glass.”

Wooden window frames, while perhaps more aesthetically pleasing than the  alternatives, have a shelf life of just two years, Backer says, after which  their performance begins to decline. They’re also more expensive than aluminum windows, which last five times as long.

Then there are even more obvious signs involving the physical operation of the  window, says Backer. “Can you open it? Can you close it? Does it stay open when you open it?”

While new cars come with a lot of bells and whistles, unless you’re trading your gas-guzzling Escalade for a more efficient hybrid model, you’re not saving money over time by ditching your old car. Cars depreciate almost  as quickly as computers. Windows, not so much. “The standards of today for windows far exceed that of yesteryear,” Carrera says.

“They’re so far ahead, people who replaced their windows even ten years ago should  consider doing it again. The glass, which makes up 60 or 70 percent of the  window [benefits from] improved coatings that reduce not only sound  infiltration but U/V, and offer protection from air conditioning leaking out.”

In the winter, heat escapes from buildings. In the summer, air conditioning  does. New windows reduce this wasteful flow to such a degree that there is a  real cost savings in installing them. Over time, they pay for themselves.

And you know how in old houses, you’d open a window, and then it would suddenly crash down, hopefully not on someone’s fingers? Or how they required you to smack the jamb with your fist to get it  to open properly? Those are horse-and-buggy days compared to what they can do  now. “The Ultralift balance helps you open the window easily,” Backer says, noting that this is especially popular in buildings with a large  elderly population.

Then there’s the question of how great your current window actually is, even if it doesn’t show outward signs of deterioration. As it turns out, there’s a bit of a history to New York co-op windows.

“Twenty, 30 years ago, when co-ops started to come around, one of the things they  offered was new windows,” Carrera explains, referring to the inducements used by sponsors to woo owners  into turning a building co-op. “They didn’t say what kind of window it would be. So anyone with a ruler, a hammer, a  screwdriver, and a saw went into the window business.”

According to Carrera, the fenestration neophytes, sniffing opportunity, found  the cheapest raw materials they could, and that’s what was used on many co-op buildings. “That’s what was replaced, by guys who just got into the business. And these were  approved by property managers or owners—not looking at quality of work, but at cost.”

This tendency to favor the bottom line over performance was abetted by the city’s energy policy at the time. “Spend $161 or less, you get J-51s and other incentives,” Carrera recalls, referring to the price of a single window unit and an  energy-related tax break. “If you had a window that cost $250, they wouldn’t do it.” The J-51 program encourages the renovation of residential apartment buildings  by giving partial property tax exemptions and abatement benefits. It is offered  through the New York City Department of Housing Preservation and Development  (HPD) and the Department of Finance.

So because of the pricing limits, what this means, in short, is that even  windows that were replaced as part of the transition to co-op 15 years ago  might very well be in need of an upgrade.

After determining that a large-scale window replacement project is a must in a  co-op or condo building, the bulk of the work happens before the first unit is  installed. “There’s a lot of planning on the upfront side,” notes Dennis Gagne, vice president of commercial sales for Pella Windows.

The most important step is making sure the shareholders actually want the  windows. Unlike, say, the paint color in the laundry room, new windows are an  essential part of every apartment. Thus it is essential that the unit owners a)  want new windows, and b) like the new windows.

Once it is established that shareholders want new windows, the next step is  figuring out how to pay for them. This could well initiate an existential  dilemma: are the windows the responsibility of the building, or of the  individual unit owner? “You have to go back to your bylaws,” Gagne says, and find out.

The next step is to bring in the professionals. “In most cases, you need an architect or engineer to write a property spec, and  then get a bid package,” says Gagne.

When you figure out which windows you want, it’s prudent to involve the shareholders in the process, Gagne says. “Show the samples. Put prototypes in the super’s apartment. Are you satisfied with the result? Then, go to bid.”

Gagne recalls one large co-op whose board made the unilateral decision to  replace the windows, “signed the contract, and then showed the samples. The shareholders said, ‘No way. We don’t want those.’” This was, of course, a disaster. “You need to get buy-in from your residents” he says. “Authoritarian boards don’t work well anymore.”

In a historic or landmarked building, things are a bit different. You can’t just remove all the gorgeous old windows and throw in aluminum ones, no matter  how much energy—and therefore money—the project might save.

“It’s difficult, because the final decision is coming from an agency [usually the  Landmarks Preservation Commission] that doesn’t particularly care about performance,” Carrera says. “They don’t care if air and water still get into the building.”

That said, however, in his decades of experience with such matters, Carrera says  he’s found the LPC to be accommodating. “In many cases, they will allow an aluminum window to replace a wooden one,” he says, “as long as you replicate the exterior and you don’t reduce light by more than ten percent.”

When looking at bids, it’s a good idea to look at other work a contractor has done, says Gagne. Visit  other buildings where he’s done the window replacements. Check the references. “You might not go with the low bidder.”

Only then is it time to move to the actual replacement part of the process.

Step one in the actual installation process is the survey. “Every window must be measured,” says Gagne. This means that workers must have access to every apartment in the  building. “It’s a very intrusive process,” which is why it's so vital to have residents on board with it from the start.

According to Backer, the survey usually takes four to six weeks, and then it  takes another six to eight weeks to manufacture the windows. After that, the  actual installation is, in many ways, the easy part. Contractors can send  multiple crews to a site, if there is adequate space, and can work very quickly  if need be.

“We could put in 100 units a day,” says Backer. “I’ve done work on the Empire State Building—15 floors. We put in 75 units a day because the floors were vacant.”

The biggest hurdle is doing the project as quickly as possible, without  disrupting the lives of the shareholders too much. Window work requires space.  A building with a huge freight elevator and a big empty basement, where the  workers can set up shop, can handle a more rigorous pace than an older, smaller  building.

“Contractors can sustain a faster pace if the building can accommodate it,” Gagne says. Typically, the workers spend two to three days in each apartment.  The wild card is how many crews a building can have working at one time. But,  while the process can be intrusive—you can’t install windows from the outside—good contractors know how to operate in those conditions.

“Manufacture and installation, if you have buy-in on the part of residents, goes  really smoothly,” says Gagne.

Greg Olear is a freelance writer, novelist, and a frequent contributor toThe Cooperator.