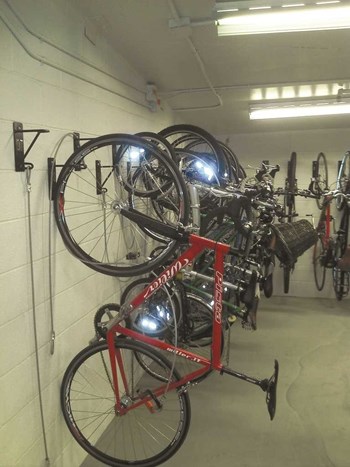 With the price of gasoline rising, daily traffic snarls, a desire to live a  healthier life and the responsibility to lessen the effect of one's carbon  footprint, there are many reasons to own a bike. Buying the bike is just the  beginning. Bicycles today are not cheap—some can cost more than the price of a used car, which brings to mind the  security of our valuable two-wheelers. In a residential development other  issues arise such as the wear-and-tear on the building. Even if a small  percentage of residents in a complex have a bicycle...those bikes comings and  goings will bear there mark on the floors, the interior of the elevators and  the hallway walls.

On the surface, owning a bicycle may not seem like a complex subject, but when  issues are examined the long term effects of residential bicycle ownership is  reviewed, it can turn into a major headache, and a big bone of contention for  managers.

Consider, for instance, recent comments to a bicyclist’s blog query about storage; responses range from the practical to the whimsical:

• “Hang the front tire over the patio rail.”

• “One hundred percent ‘no’ to bike storage areas. You can just kiss your bike goodbye if you store it  there.”

• “They’re at the foot of my bed … My bikes are the last thing I see when I go to bed and the first thing I see  when I wake up.”

• “A big selling point for our apartment was the tile floors and cinder block  walls. The walls are kinda ugly, but no bike is going to hurt them, and the  dirt wipes off easy.”

• “Fill the tires with helium and let them float to the roof.”

A lot of opinions there, on a hot topic. Basically, bicycling is big in the Big  Apple—especially during the prolonged warm seasons of late—and savvy property managers, developers and boards are including storage  convenience among their benefits.

Bicycling is big in New York City and will continue to grow exponentially in the  years ahead. New Yorkers love riding their bikes, as a means of commute,  exercise, and especially for fun when the cold winter winds subside and the  city's denizens want to escape their winter hibernation. New Yorkers are  fortunate to live in one of the best biking cities in the U.S. In fact in 2012,  Bicycling Magazine ranked New York City as the seventh best bicycling city in  the nation. According to the magazine, the future of biking in the city is  exciting.

In 2013 New York's Citi-Bike will be launched. It was supposed to be launched  this past summer, but was delayed due to a software glitch. When the program is  implemented it will be the largest bike-share system in the nation, with 600  stations and 10,000 bikes, primarily spread throughout Manhattan and Brooklyn.  Additionally, New York City's Department of Transportation (DOT) is planning to  expand bike-lane miles to 1,800 miles by the year 2030. This expansion will put  the city in league with other legendary cycling cities such as Paris. This is a  commitment that local bike advocates refer to as “staggering.”

A survey conducted by the city in 2009 found that more than half a million New  Yorkers are regular bicycle riders, hopping on their bikes several times per  month. According to the DOT, the number of New Yorkers who commute to work by  bicycle more than doubled from 2006 to 2012, and grew by 13 percent from 2009  to 2010.

The Bloomberg administration has been seeking ways to make the city more  hospitable to bicycles. Since 2007, the city has carved out 259 miles of bike  lanes and protected routes in the five boroughs. Some real estate brokers say  as many as half their clients now ask about bike storage, and though few buyers  consider it a deal-breaker, marketing materials now make the most of bike rooms  and proximity to bikable parks.

The Need for Storage

At a building marketed and managed by Halstead Property, +Art, at 540 West 28th  Street just off the High Line, a room off the lobby was to be used for cold  storage, to hold deliveries from companies like Fresh Direct until residents  returned home. But it is now being converted into a bike room. The  grocery-holding room was moved to a reconfigured space in the basement.

“We started seeing high demand for bike storage about 18 months ago,” said Stephen G. Kliegerman, the president for development marketing at  Halstead. “It's an amenity I think people are starting to expect in a new building.”

Superior Ink, a Related Companies condominium on West 12th Street, even offers  bike valet service. Residents can call ahead and ask that their bikes be taken  to the lobby.

But white gloves or no, bike storage tends to be easier to find in new  buildings. As of 2009 most new buildings, including multifamily residential,  have been required by the city to provide some bike storage. (Offering it is  also a relatively inexpensive way for a developer to gain points toward LEED  certification, which measures a building's environmental impact.)

“It adds to the general tone of the building,” said Shaun Osher, the founder of the brokerage firm CORE, who kept his rusty  bike on the fire escape when he first moved to the city 20 years ago, “It's one less thing you have to worry about in your apartment.”

The developers of 80 Metropolitan, a condo development in Williamsburg that  opened in 2009 and is being marketed by Halstead, originally set aside 24  spaces for bicycles, all free. When those filled, they added 42 more. When  those were taken, the developer installed a hanging system in the garage for 22  more bikes. Now, there is a plan to add enough storage to accommodate the 12  cyclists on the current waiting list.

This example illustrates how planning for bicycle storage is becoming a  necessity. What do property managers and boards need to know when planning  storage areas, and what rules need to enacted to prevent problems?

According to Erin Michaels, a board member at 305 West 97th Street, a  medium-sized condo building on the Upper West Side, “We thought long and hard about what house rules we needed to enact before  opening our storage facilities.”

While storage rules should be adjusted to a site's physical limitations and  allowances, this is a sample guideline for boards—a typical arrangement, set up by the directors at 305 West 97th Street, a  medium-sized condo building on the Upper West Side which boasts two locked bike  storage facilities:

1.All bicycles must be registered with the Management Office.

2. Bicycle storage spaces are available to residents only. Resident owners have  the right of first refusal regarding bike storage availability.

3.All bikes must enter and exit through the service entrance and must be locked  and stored only in the racks provided.

4. Monthly fees for bicycle(s) must be paid on time each month, failure to pay  may result in the loss of the storage space.

5.Bicycles are not permitted in the lobby, on passenger elevators, or in any of  the resident hallways.

6.Neither Management nor the Condominium Association assumes responsibility for  the loss, theft or damage to any bicycle.

7. If the sale of a unit or termination of a residential lease results in an  individual moving out of the building, the bicycle space reverts to the  association for reassignment.

8.Failure to comply with the bicycle storage rules or to pay the associated fees  shall be sufficient cause for the 305 West 97th Street Board of Directors and  Management to revoke bicycle storage privileges.

What Does It Take ?

It may seem like a very simple idea, just take an unused portion of the  basement; fence it in; put a padlock on it; give a copy of the keys to bike  owners and—instant bike storage.

“We didn't want residents just putting their bikes anywhere in the basement, that  would lead to problems and inevitably to a situation where one bike owner is  accusing another bike owner of damage. We decided to go with a specially built  bike storage rack system,” Michaels explained.

One company that specializes in constructing bike storage systems is Rudy Rack.  Rudy Rack was started in 1991 when its founder Dick “Rudy” Rhudenbusch recognized that bike retailers needed quality, versatile and  efficient bike storage systems. Since then Rudy Rack has expanded their storage  rack line to include specially constructed racks for condominiums.

According to Rudy Rack, “A well-designed racking structure can help organize storage space and make it  easier for tenants to access their velocipedes.”

Rudy Rack manufactures four different types of racks. A stand-up rack system; a  double-decker rack system which maximizes storage in small spaces; a wall rack  system and a backroom storage unit on wheels for temporary storage solutions.  All of these storage systems can be seen on their website at www.RudyRack.com.

Providing bike storage has also presented some boards with a new income  opportunity. The Beatrice and the Continental, both on Avenue of the Americas,  charge upwards of $100 per month, according to Clifford Finn of Citi Habitats  Marketing Group, the exclusive brokerage for the two properties. “Retail and commercial space is at a premium,” Finn explained of that neighborhood. “There's not a lot of leftover space in a place like that.”

In most buildings however, either the service is free or nominal, maybe $10 a  month. That small sum is mostly intended to discourage the leaving of unused  and unusable bikes in storage ad infinitum, rather than to raise revenue.

“While some boards do charge high storage fees, we don't,” says Michaels. “It's just a nice thing to be able to give our residents. We only charge a  minimal amount...to pay for the cost of the storage racks, and cover the cost  of electricity and maintenance of the bike storage facilities. It's a lot  cheaper for us to provide the storage than to repaint hallway walls that get  scuffed by handlebars and tires, or clean the bike trafficked carpets. It's a  win-win for everyone.”

When it comes to common areas, management has to define what is acceptable—and what is not—when it comes to bicycle storage. It's a challenge that seems to be growing with  each passing year, as the interest, and the list that makes bicycling a good  idea grows.

J.M. Wilson is a freelance writer and a frequent contributor to The Cooperator.  Associate Editor Liam P. Cusack contributed to this article. 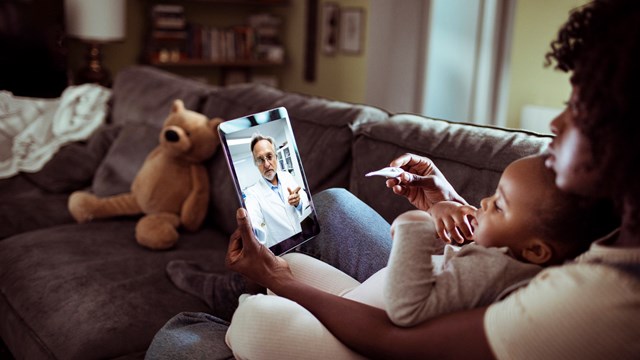