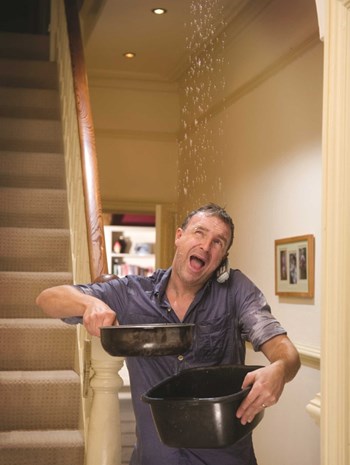 As we city dwellers go about our busy lives, we often forget about the plain  facts of life here on this spinning globe: gravity creates an unceasing tension  in the materials we assemble into buildings and other structures. Whether or  not we are paying attention, all of matter is reacting to gravity’s pull, and those forces can result in small tears or holes in facades, roofs  and other parts of a building—a fact that’s never too far from Wayne Bellet’s mind.

“Nobody wants to appreciate that the earth is moving. And when you have a plane  change on a roof, that causes stress on the spot where the two planes meet,” says Bellet, owner of Manhattan-based Bellet Construction.

Over time, such stresses can result in a hole in a roof, oftentimes where planes  intersect, such as where flashing surrounds a chimney. Even if it’s just a pinhole leak to start, if it is left undetected for very long, that  dripping water can cause serious damage to a building and even adversely affect  its structural integrity.

Water leaks are the bane of many apartment owners and many building  superintendents. But unlike a drippy faucet or a drafty window, which often can  be simply fixed, water leaks sometimes can be very difficult to find and  remedy. Many different technologies exist to help find the source and the  extent of leaks and other technologies can help minimize the damage these leaks  cause. Knowing what makes leaks happen, the ways that they are found, and how  they’re repaired is essential for anyone living in a multi-family building. Because  after all, such a leak might happen in nearly anyone’s apartment and still affect everyone in the building because of a costly fix  that all will have to pay for.

A longstanding leak might signal the need for a major building improvement  project, but it might also require a less invasive solution, such as a spot  replacement of just part of a roof. Knowing what solution to use is the  contractor’s bailiwick, but understanding something about the fixes for water leaks, and  the best practices for finding the source of the leaks, is the responsibility  of each building resident.

Water leaks in a building are generally of two kinds: rain-related or  plumbing-related. “Are you dealing with a leaky building or a leaky pipe,” says Jack Kleinfeld, owner of Bronx-based Kleinfeld Technical Services, which  uses various methods for detecting leaks, including infrared imaging.

A leak doesn’t always have to be particularly severe before residents notice water stains or  seepage in the walls or ceiling, and some leaks will show up more or less  immediately. Other leaks could be happening for weeks before anyone notices.  Some leaks might not be evident in any way, such as a pipe leak for which the  building’s management can’t find the source. Such a leak might initially be detected through the water  meter on a building’s heating system.

One common water-related issue in multifamily buildings in the city is leaking  pipes that are connected to steam boilers. In these systems, condensate return  lines are buried in the floor and can develop leaks. Such a leak is first  detected through the boiler’s water meter indicating that the system is losing water. At that point, a  building’s management team should have experts bring in monitoring equipment to find the  leak.

These days, infrared or “thermal” imaging often is used to find a leak’s source. Since a leak in a multifamily building can come from different spots  on a large surface such as the building’s exterior, thermal imaging covers all of that territory by looking for a  temperature signature on the surface that indicates where the leak is located.  The technology helps a professional to find areas of the building that are  water-damaged. When used on a roof, a thermal imaging device scans the surface  horizontally, detecting where moisture is trapped within the roof.

“From that information you can decide how to fix it, or where to remove the wet  section of roof. An infrared roof scan is simple, effective, inexpensive and  quickly done, compared to the cost of roofers. There’s also no noise or destruction,” Bellet says.

Another fairly routine way of inspecting a building to find water leaks is doing  a roof survey. In a roof survey, the building’s management will call in a professional, who will do a thermal imaging survey  of the entire roof. He will also take photos of the roof and then mark with  paint any damaged area of the roof. Generally, a professional will offer spot  fixes of the roof when small parts of it are damaged or leaking.

“If a large portion, such as 50 percent or more of the roof is compromised, you’re probably better off doing a roof replacement,” Kleinfeld says, cautioning against temporary fixes that could do more harm in  the long run. “You really shouldn’t re-roof over a wet area.”

The single most effective preventative step to take to avoid roof leaks is  proper gutter and downspout maintenance. Make sure these parts of the building  are always clear and free of obstructions, by regularly cleaning them.

One method of detecting leaks in a roof sort of imitates what happens when a  gutter or downspout is clogged—it backs up water onto one part of the roof. By creating a dam made of sheet  metal around an area of a flat roof surface and then applying water to that  area where the leak was, specialists can trace a leak to see where the water is  coming into the building.

Some companies, like American Leak Detection, stick strictly to the inspection  side of this business. The company finds water leaks noninvasively—without excavation or demolition. For exterior water penetration issues,  American Leak Detection uses thermal imaging technology and also electric  vector mapping, which employs an electric current and water to find even a  pinhole-sized tear.

Whether or not an apartment owner hears a drip coming from the roof or  elsewhere, such a leak might be making a sound that still is detectable.  Specialists sometimes use ultrasound technology to hear and find an active leak  of water or steam. This technology isn’t used on roofs, for obvious reasons—it’s too loud outside for the technology to work.

The most common source of water leaks in suburban and urban multifamily  buildings is the roof. Areas of the roof where flashing is used typically are  the weakest points on the roof surface, and are the spots most likely to  develop a leak. Because each leak is unique, there’s no rule of thumb for how long it can take to find a water leak. Finding the  source of the problem might take just a couple of hours, or it might require  many hours of work, depending upon the size of the property.

Costs for bringing in a leak detection specialist vary. Several different types  of professionals are qualified to do the job, including firms that refer to  themselves as leak detection specialists, as well as engineers or contractors  with expertise in the area. Hiring such professionals can start at $600 per man  per day, and often two men are needed to inspect for a leak problem. Some day  rates range upwards of $2,000.

Knowing how to pick the right company to handle the job is a matter of matching  up skills and needs. For example, if the leak is isolated to just several  apartments, a company such as American Leak Detection could find the source of  the problem.

“Sometimes people call us because they know they have to replace the roof, and  they hire us to see what spots need to be replaced,” says Travis Huang, New York City field manager for American Leak Detection.

For a whole building leak problem, management always should consult the building’s engineer regarding how to proceed. If they pay attention, though, building  owners and management will be able to pick out the best firms to do the work,  based in part upon what they say. “Someone with the experience and training in finding leaks—who is willing to ask questions and listen to answers—is really what you want,” Kleinfeld says.

Sometimes, replacement of an entire building system could be the best solution  to a problem with leaks, says Kevin Crawford, a senior estimator for West New  York Restoration, a building envelope restoration company. “Once you’re chasing leaks, it indicates the age of the system. The roof might need to be  replaced, or the windows or façade might need to be replaced,” he says.

When they are found, leaks are repaired in various ways. If the leak is in the  area of flashing around a chimney, for example, the flashing might need to be  replaced and repainted. The type of fix for a leak always is dependent upon the  type of problem, but conditions of the building material that is affected, the  age of the building component (such as a roof, stone façade, or even steel window lintils), and the size and scope of the leak all  factor into a remedy. The amount of damage caused by the leak also is part of the equation.

Determining whether the fix of the roof leak worked can be done with another  low-tech water test. The expert simply floods the area of the roof that’s been repaired to see if it leaks. This is one of the parts of his job that  Bellet relishes. “I love a bad leak. I am so sure I can fix your leak, I won’t charge you if I don’t fix it,” he says.

Sometimes the leak is in the middle of the basement floor of a building. What’s happening in such a case is that the water table underneath the building is  rising and falling because of rains that soak the soil and seep up into the  basement.

To fix this type of problem, a contractor will install a water-tight membrane on  the basement floor and up the basement walls at least eight inches and as high  as a few feet. The same method can be used to seal an elevator pit, which is  essential to safeguard all in the building.

“You can’t have water in an elevator pit—you have [electrical] cables in there,” Bellet says.

Other basement leak fixes could be much more invasive. Some buildings have  basement water problems because their exterior brick walls are porous due to  moisture coming through them. In these scenarios, the water is coming through  because the brick is in contact with a water source leaching from the soil. So,  a contractor must excavate to the base of the building to get to the root of  the problem. This fix involves moving soil and landscaping, and the logistics  can get pretty complicated.

Not every contractor will give an ironclad guarantee on his work, but many are  passionate about their jobs, and dedicated to helping their clients. These are  the specialists that a building’s management should be working to find, because they will do the job right.

Peter Brandt on EVs in NYC:
Another difficult issue is how to get every shareholder a chance to charge up a car. When one is finished charging up, how do you get that c…
marilyn SYGROVE on Rebranding Buildings & HOAs:
I totally agree! My firm has recently been asked to re-brand a number of buildings in NYC. Need to take it that one critical step further…
Dan Fast on Gov't Regulations Account for 40.6% of Multifamily Development Costs:
Interesting that this all comes from developers and related interests whose only incentive is to make a profit. They want no regulation, no…
A homeowner on Gov't Regulations Account for 40.6% of Multifamily Development Costs:
Regulations became necessary because developers built shoddy homes. I am very happy to pay more to live in something that doesn't set itsel…
Walter Milliken on Design Trends for 2022:
Beige and gray are very depressing colors for me .