Do not show again [X]
By Raanan Geberer   2012 August Maintenance 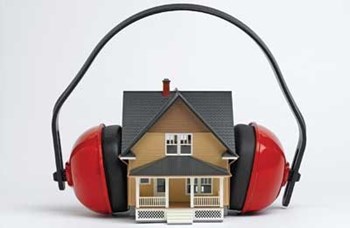 Noise is a key quality-of-life problem for almost anyone living in a  densely-packed urban environment. Many urban dwellers are immune to it as a  result of having lived all their lives in the city—maybe you even grew up next to an elevated train line, like this writer. But  others are very sensitive to it. Maybe you have a neighbor who keeps playing  loud music at night. Maybe you constantly hear what sounds like a ball bouncing  on the floor upstairs from you. Maybe you’re awakened early every morning by the sound of a garbage truck outside your  window.

It's the bane of many a co-op or condo-dweller’s existence, and over the years engineers, architects, and designers have tried  any number of ways to reduce the problem of noise in multifamily buildings—some more successfully than others.

What are some of the main complaints that are heard in co-ops, condos and other  apartment buildings? Door noises, people walking heavily on the floor above or  talking loudly in the apartment next door are common problems. They could be  noises that travel through paper-thin walls or floors, like footsteps, or they  could be noises that travel through the air, like music or the loud voices of  people who are arguing.

Structural problems, problems that the residents can’t see, are often at the root of these complaints. “Often, floors and walls are either too thin or made of wood,” says Eugene Ferrara of JMA Consultants and Engineers P.C. in Englewood Cliffs.  Most recent co-op or condo buildings, of course, are not wooden-frame  buildings. But even in new buildings, he says, you often have sheetrock walls  that aren’t properly insulated.

The DEP is the agency charged with enforcing the city’s noise code. Here are some of the points contained in the current code, which  was adopted in 2007:

Construction, a common source of complaint for residential neighbors, must occur  between 7 a.m. and 6 p.m. on weekdays under normal circumstances, although the  rules for alterations are more lenient.

A dog barking for a long period of time, depending on the time of day, could be  considered cause for complaint.

An air conditioner or similar device can’t produce a sound of more than 42 decibels, as measured 3 feet from the source.

Music coming from bars and restaurant can’t exceed 42 decibels “as measured from inside nearby residences” and 7 decibels over the “ambient sound level.” (If you live in certain trendy parts of Manhattan or Brooklyn, this may be a  problem for you.)

Maximum sound levels from garbage trucks can’t exceed 80 decibels, when measured at a distance of 35 feet or more.

“Revving up” a motorcycle or hot rod may be illegal if you can hear it at a distance of 150  feet away or more.

How are these rules enforced? “DEP has an enforcement staff,” says Chambliss. “Certain types of complaints require the use of sound meters to determine if the  Noise Code is being violated. Noise from construction cannot be eliminated, but  the code lays out a mitigation process. Certain activities can be better  controlled than others. Proximity to the work also plays a large part in how  successful mitigation techniques work.”

Notice that these noise codes don’t specify someone walking heavily on the floor above or slamming the door  loudly. These types of things are often subjective, and the co-op or condo  itself often has to mediate between the two owners or call an expert consultant  in. We’ll hear more about this later on.

What are the penalties for violating the city’s noise ordinances? The aforementioned New York City noise code has a penalty  schedule, which is fairly complicated (the entire schedule can be seen at  http://www.nyc.gov/html/dep/pdf/31-115_noise_code_penalty_schedule.pdf). To  simplify things, a first-offense penalty for “noise from sound device exceeding permit levels” is $250, the second offense is $500, the third is $700 and the fourth is  $1,000. There are separate penalties for improper uses of a “personal audio device” (a stereo, radio or TV), noise from engine exhaust, the improper use of a car  horn, and several other items.

But the city isn’t the only entity that can fine noise offenders in a condo or co-op. “If the problem is in your co-op,” says Alan Fierstein, founder and president of Acoustilog Inc. in Manhattan, “the penalty can be eviction. I have seen the board impose monetary penalties,  and I saw one board that forced someone to soundproof his unit.”

That’s why it’s important for unit owners to hash the problem out among themselves, without  the aid of management and the board, in order to avoid such serious problems.

So far, we’ve been talking about the DEP’s noise codes. There are also building, or construction, insulation codes that  are issued by the Buildings Department. Older buildings sometimes don’t comply with the latest code, says Fierstein, but when a large renovation is  done, these structures have to be brought up to code.

Builders didn’t always take soundproofing into consideration when designing apartment  buildings. Particularly in the early and mid-20th century, phonographs, and  later radios, were available, but they could never reach anywhere near the  volume today’s stereos and sound systems are capable of.

A pair of Brooklyn condos located in DUMBO, for example, hired soundproofing  firms to mitigate noise complaints. J Condo, 100 Jay Street, hired  soundproofing consultants, Architectural Testing, to minimize noise from the  nearby bridge. And, Beacon Tower at 85 Adams Street hired Shen Milsom Wilke, a  New York-based acoustical design firm, to evaluate and measure site noise.  Their windows feature heavy panes of laminated glass separated by eight inches  of air space and rubber gaskets, to dramatically reduce the sound levels.  According to Shen Milsom Wilke, it was found that sound levels intermittently  peaked at 96 dBA due predominantly to the subway train passing by every few  minutes at the 5th floor level.

“In the recent past,” Ferrara says, “you’ve started to see some [building requirements for] foam backing under wood  flooring, requiring sheetrocking around open joints in walls. We review  renovations, and we’ve been insisting on these items for close to 10 years.”

Another professional, Mason Wyatt, owner of Manhattan-based City Soundproofing  says, “You [the builder or renovator] want to limit air transfer, because where air  goes, noise goes. Typically, vents and spaces around the door can be a culprit.  Standard building methods don’t provide as much sound attenuation as most people would find acceptable.”

However, there are some builders and renovators who still don’t get the message. Devin O’Brien, president of Brooklyn Insulation, finds that in his experience, “Things are built more for code than for sound. We’ll find new construction that isn’t even built to what is considered adequate soundproofing. In this city, the  partitions should block 50 decibels, according to code, but I find that much  new construction or renovation doesn’t meet this.”

Asked about effective insulation materials, the experts interviewed for this  article mentioned several options. Among them are:

• Ceiling fixtures and overhead lighting that are sealed, rather than containing  openings;

• Spray foam insulation (a material that is sprayed into a space and then hardens,  filling a space);

• Green Glue, a damping compound, meaning a compound that damps, or lessens the  effect of, vibrations. It is applied onto construction materials like drywall  in the same way as one might apply glue itself.

• Sound isolation clips, which are installed onto ceiling joists, wall studs of  masonry.

Of course, a contractor or specialist has to know what they are doing. “Traditional methods, like stacking more drywall, will give you only a marginal  benefit,” says O’Brien. “You can’t keep stacking the same material on top, on top—at a certain point, you get diminishing returns.”

How do you find out if a sound problem is genuine or imaginary? There are many  different types of meters and measuring devices. The problem is, however, that  if someone knows you’re coming, they will likely keep the sound down for the time being.

Fierstein has a novel solution. If resident A is complaining about resident B  above him, he’ll go into resident A’s apartment and set up a monitoring system when resident B is not even aware he’s being monitored. Speaking of floors, he adds, “most co-ops and condos have a carpeting rule [to keep noise down for the benefit  of the person downstairs], but it’s not always enforced. It’s more likely to be enforced when a complaint arrives.”

You, as a board member, unit owner or manager, can also call 311. “Loud music, TV, singing and other sounds that can be controlled by a resident  that are bothering a neighbor next to, above, or below the unit where the sound  is coming from are considered neighbor-to-neighbor complaints and are referred  to NYPD,” says Chambliss.

But for many, if not most, people, calling the police is a last resort. To avoid  contention and ill-will, perhaps it’s best to get the two parties together and see if they can solve the problem on  their own. And if they can’t, call in an experienced specialist.

If you do decide to do some renovation and include sound attenuation measures,  make sure you hire a specialist. “If you hire a regular general contractor that doesn’t understand soundproofing, you’re kind of stuck,” says O’Brien. “You’ll have to do the research and make sure they do it the right way.” 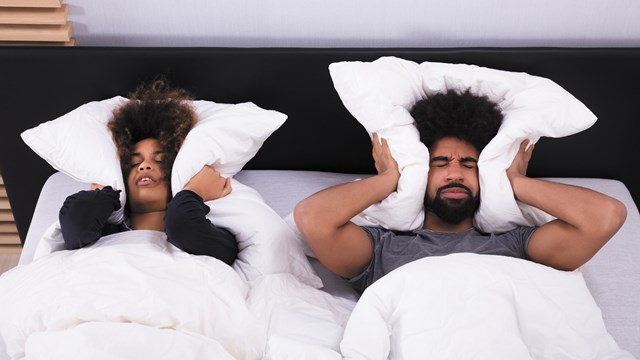