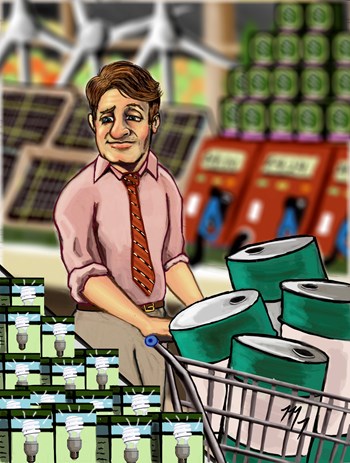 Sustainability is the watchword these days. All over the country, businesses and residences are being encouraged to go green, and condominiums, cooperatives and homeowners’ associations are no exception.

But not all condos/co-ops/HOAs are cut from the same cloth; different associations have different budgets, various layouts that can render some energy alternatives more viable than others, and a range of owners/shareholders with their own priorities which a board must always consider. Also, several power sources, from cogeneration to solar to wind, are still newer than they are not, and a board can be forgiven for not being on the cutting edge of the latest options. Fortunately, we’re here to provide a primer on the options that are available today, regardless of your geographical location or the size of your association’s coffers.

A board maintains a fiduciary duty to its ownership and shareholders that is paramount over all other concerns. Thus, even the most environmentally conscious panel of residential representatives needs to prioritize affordability and cost, oftentimes over saving this majestic planet. But that isn’t to say that one cannot do both; just that a cost/benefit analysis must be implemented.

Oftentimes, local utility companies will work with interested clients to incentivize reducing their energy usage. “I think that, in many cases, people who are aware of the environmental options which are available in their area have yet to buy in based on the price, and those who are unaware might do some research, and find that certain energy options are not viable to them,” explains Robert Meyer, director of engineering services at FirstService Residential. “In Chicago, for example, there are several companies that are asking us to participate in the running of our building’s generators, and diminishing consumption that is happening within buildings, when there is a need for conservation.”

(This process is called ‘load shedding,’ and is often sponsored by local utility providers. Check with yours to see if you’re eligible.)

“The utility company will call the participant and let them know that they’re going into a red zone,” Meyer continues. “At this point, we would start to turn down some of the utilities in our building, a la the big lights that are consuming energy for no reason—in the garage for instance. We would be able to maybe ramp down the chillers that are producing the AC to 70% range and save some energy from the grid. Some utility firms will request that you run your generators, so you turn off anything that you can and put yourselves on generator power. You’ll do this for about a five-hour window, and the company will pay you a substantial fee to participate—more than $1,000 in some cases.”

Bob Morelli, construction specialist manager with First Realty Management, which has offices in Massachusetts and Rhode Island, is another advocate for these incentive programs. “The first thing that we’ll do for a board is look into the rebate programs that the utility companies offer, and take advantage of those where applicable,” he says. “We always want to be conscious of the cost to owners, as well as of the pay-back period, because we’re encouraging these associations to make an investment both financially and to the planet. And we’ll train boards. Sometimes you’ll encounter one that wants a three-year or a five-year payback, and we try to frame those programs that may take longer as an investment; not only are they going to recover their money, but they’re going to help reduce the carbon footprint of their property and, in turn, aid the planet. I believe that many people enjoy that; they like to be part of the solution and not the problem.”

The Price is Right

Clearly, cost is the mitigating factor for an association considering greener energy options. If it deems a more sustainable approach affordable, one of the major pros for a board embracing same is, somewhat obviously, the utter lack of cons. “There really isn’t any downside to embracing a greener alternative power source, because there won’t be any noticeable effect on the building,” says Doug Weinstein, vice president of operations with New York City-based AKAM Associates, Inc. “No one will be able to ascertain via the commodity exactly from where their electricity is stemming. There’s no lower wattage or anything. And, as a matter of fact, there may be tax incentives—but a board will have to check with its accountant regarding those.”

Rarely is a board motivated by environmental factors above practical financial concerns. This isn’t cynicism so much as it is a board doing its due diligence to ownership/shareholders. “A board’s primary concern is fiduciary duty, but adhering to that does not mean that it’s not concerned with the environment,” says Scott Dalley, executive vice president and chief operating officer of Access Property Management in New Jersey and Pennsylvania. “The board consists of homeowners in and of itself, and both they and their neighbors are always concerned with managing costs. They’ll explore any option to do so, energy or otherwise, but, at the end of the day, they need to assess benefit and cost. If it makes sense from a financial standpoint, they’re likely to show interest in change. But if the payoff is less evident and doesn’t come for a long time down the road, they’re less likely to be interested.”

Should a green-minded property manager find some resistance from a board when presenting more sustainable energy options, Morelli encourages persistence. “Both the technology and rebate programs are constantly changing, and, any time they do, we like to present that to a board,” he says. “When people take time to digest this information, they become enthusiastic, and want to be part of something positive and cutting-edge. If I tell you something, you’ll forget it; if I show you, you’ll remember; but if I involve you, you’ll understand. So I try to work with both boards and owners,going beyond common areas, letting individual owners know what programs they can take advantage of that are specifically targeted at them. That’s part of embracing green incentives; going beyond your basic responsibilities.

“Fifteen years ago, cogeneration, for example, was a fairly new concept,” Morelli continues. “We presented it to an association, and they rejected it. They continued using oil to heat the property via their old boilers. Eventually I presented cogeneration again, and they rejected it in kind. But the third time I brought it up, the price of gas had spiraled downward. Although there had been a payback all three times we’d presented cogeneration, this time they got it. They kept hearing the message differently, until it finally stuck.”

It goes without saying that a complete overhaul of a building’s energy is a complex undertaking, one for which even the most well-intended association may be under-prepared at any point or time. This shouldn’t discourage the association from embracing sustainable options, however, as there are multiple tweaks and tune-ups it can implement to reduce the property’s carbon footprint while still saving money.

“We will happily examine a building to see where we can grab some of the proverbial low-hanging fruit and make a difference, whether that be lighting or variable frequency drives on some of the pumps and motors, things of that nature,” says Meyer. “Should we deem there be options available, we would bring in a  professional to walk the building on an energy audit and provide specifics, along the lines of ‘should we get rid of one type of lamp and replace them with LED, the cost savings on energy would be X, the ROI would be Y, and that would net the association Z.’”

Sometimes states provide grant money for these more moderate types of upgrades, but Dalley notes that this is happening with less frequency of late. “But retrofitting old light fixtures such that you’re using LED or another more efficient source are things in which boards tend to be interested if the end result is that it will be cost effective,” he says. “If they can retrofit all of the common area lighting in the building and they’re going to save both on the amount of energy consumed and the replacement costs of the fixtures and the lights, that's potentially a home run, and something they would definitely go for. But if the cost is something that isn’t going to produce a measurable payout for 15-20 years, then it’s a much more difficult sell. People living there now may not be around that long.”

Weinstein doubles down on the efficacy of LEDs. “That’s the easiest thing in the world to sell an association in regard to lighting,” he says. “There are certain greening options that have an ROI, about which a board can say ‘okay, we’re going to make this investment, we’ll be paid back in X time period, and we'll generate Y in savings.’ And, in the last few years, the cost for LED bulbs has gone down significantly.”

“There’s always things that people can do,” agrees Morelli. “You have to understand how precious it is to break down your plastics and metal and paper products. And when you make purchases, look for minimal packaging, or packaging that's definitely recyclable in your area. Reduce the heat, put the lights on a timer or sensor at night; we find inexpensive things that can be implemented under the operating budget to save energy. Some people forget that water, as it’s deemed a renewable resource, is something that needs be conserved. Something as simple as reducing the water pressure to your building will save in the sense that you will waste less down the drain, and it won’t cost you anything.”

So there you have it; there are ample methods and resources by which an association can reduce its energy consumption while saving money, from the large-scale to the extremely local. Consult your property manager or local energy providers today and see what you can do in your community!

Mike Odenthal is a staff writer at The Cooperator and other publications.