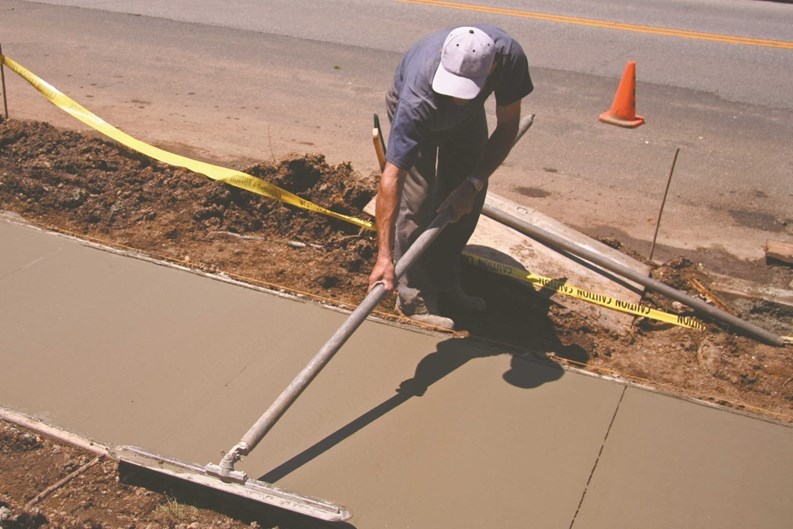 Not for nothing is New York City often called “the concrete jungle.” Thousands of square miles of pavement of all descriptions cover the city, from newly-poured (and quickly graffiti'ed) cement sidewalks to cobblestones left over from the 1800s. Caring for and repairing these acres and acres of surface is a huge job–and co-op and condo buildings bear much of the responsibility of keeping the pavement outside their front doors in good shape. Negligence can not only result in injuries to residents and passers-by, but that in turn can bring down costly, drawn-out litigation onto the building itself. Here are some things you might not know about concrete.

The American Concrete Institute (ACI) is a nonprofit technical and educational society organized in 1904, and one of the world's leading authorities on concrete technology. According to ACI’s official dictionary of terminology, concrete is a “mixture of hydraulic cement, aggregates, and water, with or without admixtures, fibers, or other cementitious materials.”

By contrast, cement is “a binding material that sets and hardens by chemical reaction with water and is capable of doing so underwater.” Examples include portland and slag cement.

The two words are often used interchangeably in both casual conversation and in the media, but members of the industry find the latter particularly irksome.

The term “asphalt” is technically shorthand for asphalt concrete, a mixture in which viscous, petroleum-based asphalt is used as the bonding agent, rather than cement.

Whatever you call it, New York City has a whole lot of it. According to the New York City Department of Transportation (DOT), about 90 percent of the city's 12,000-plus miles of sidewalks are concrete.

“The standard specification requires a 3,200 pounds-per-square-inch, or PSI mix,” says Craig Chin, a spokesperson for the Department of Design and Construction (DDC), “but we also have lots of bluestone, granite, bricks and pavers.”

And paved surfaces have come a long way since the days when builders could choose between grey, grey, and a slightly-different grey. Masonry experts can now ply their trade in color too. "Most concrete naturally cures to a grayish white color,” says Mike Bavaro, Jr. of City & County Paving Corp. in the Bronx, “but we can also tint the concrete by adding dye to the mix.”

Texture and sparkle can be added to concrete as well, as anyone passing through Times Square will notice. "A [glass-like] aggregate called carbon sparkling was added to the mix in that case," says Chin. "This material costs around $90 per 50 lb. bag, and it's added to the concrete mix before the pour."

A friend of this reporter used to joke that the snow doesn’t stick in New York City because it’s so close to Hell. In actuality, the streets are significantly warmer than the surrounding areas because of the subways, the underground steam pipes…and the streets themselves.

“The asphalt streets are black and they hold the heat,” says Carmine Attanasio, executive director of the New York City Concrete Promotional Council. “In a city, the temperature is eight to 10 degrees higher because of the asphalt.”

And it’s not just the streets. Asphalt roofs, too, conduct heat, adding to the increased temperatures. Of course, concrete is not black, and therefore it reflects more heat than it conducts. Which means that concrete is green—not literally of course, but in the environmental sense, very much so.

Not only is it light in color, therefore not contributing to increasing the temperature of the street, a properly maintained concrete sidewalk can last half a century. “That’s what’s green about concrete,” Attanasio says. “Sustainability.” As a building material, Attanasio says it fits in well with the Mayor Michael R. Bloomberg’s vision for PlaNYC, a strategic long-range plan which places a premium on sustainability. PlaNYC sets a goal of achieving a 30 percent reduction in New York City’s annual greenhouse gas emissions below 2005 levels by the year 2030.

Like most items we use regularly—such as furniture, cars and clothes—sidewalks can break down from normal wear-and-tear. If concrete is properly poured and dried, it holds up very well. When concrete cracks, it’s generally because it wasn’t installed properly to begin with. There may be a flaw in the frame, or the material beneath the surface, or the water content of the mixture. But as Chin explains, there are several other factors that can cause sidewalks to deteriorate, including undermining caused by erosion, poorly restored utility cuts, tree root growth, and the expansion and contraction caused by weather.

Bavaro explains further: “During the freeze-and-thaw cycles here in the Northeast, concrete will heave when the ground freezes underneath it,” he says. “A slab may get pushed up, then not settle back down into place after the thaw. This type of stress to the slab can also cause it to crack. Tree roots growing under a sidewalk can also cause the same type of heaving and cracking. Maintaining the sealant at expansion joints will help keep water from getting under the slabs and help to minimize heaving and cracking.”

According to Attanasio, another—perhaps surprising—threat to concrete is not some pernicious natural antagonist, but ordinary chewing gum. Though gum doesn’t really break down the surface of a sidewalk, the amount of time and effort required to remove wads of gum from the pavement in front of a building can add up to a first-class headache very quickly..

One thing that definitely will accelerate the breakdown of concrete however, is salt. This is an especially important concern in the winter, when building supers and staff members are typically charged with keeping the sidewalk clear of ice and snow. Rock salt wreaks havoc on sidewalks.

“You’re supposed to put calcium chloride on concrete,” Attanasio says. “The salt will penetrate the concrete, and start what’s called ‘spalling’,” which is when cracks in the concrete spread out across the surface. Avoid that, and a properly-installed sidewalk can last a generation.

It’s always important to vet out and check the references of any contractor doing work in your building, but the current economic climate has made that process even more vital as some contractors—a small minority, but enough to raise alarm—may be tempted to cut corners or over-promise in order to land work.

“It’s all about the economy,” says Bev Garnant, executive director of the American Society of Concrete Contractors. “Some people are taking jobs for no margin,” just to keep working. “People are desperate for work.”

Many co-op and condo boards are struggling too, and it can be extremely tempting to accept a low-ball bid for a project. Unfortunately, giving in to that can cost more in the long run. “As we like to say,” says Garnant, “buying low-dollar can be high-risk. You have to look at track records, referrals, certifications, bonding capacity—all those things. Boards and managers need to be very careful and selective. Don’t go shopping just for the low number.”

If your building falls prey to a less-than-stellar pavement contractor, problems with the work are very often apparent upon inspection, explains Chin. You can often tell if a sidewalk wasn't laid properly simply by looking at it. It's relatively easy to see if a half-inch vertical trip hazard is left between two flags, if there's not an expansion joint every 20 feet, if expansion joints are missing, if there is a poor finish, if there is an incorrect pitch sloping back toward the building line, or if it is cracking. These are all signs of subpar sidewalks.

A Word About the Law

And subpar pavement work is a big problem for the buildings fronting onto it—at least since 2002, when responsibility for sidewalk maintenance and repair shifted from the city to the buildings fronting onto the stretch in question. According to Chin, "Under section 2904 of the New York City Charter and Section 19-152 of the City Administrative Code, property owners are responsible for repairing and maintaining sidewalks adjoining their properties.”

In the case of co-ops and condos, the “property owner” means the co-op corporation or condo association. The responsibility for sidewalk maintenance does not vary between co-ops, condos, or rental buildings. “The type of building is irrelevant, if it contains four or more units or is a commercial property,” says Robert J. Braverman, a partner with the law firm of Braverman & Associates, PC in Manhattan. “The property owner is responsible for the abutting sidewalk.”

If you’re issued a citation, a private contractor may be used to fix the buckling sidewalk outside your building, but it's still necessary to get the proper work permits from the permitting office in your borough. Chin also suggests contacting the Highway Inspections Office of your particular borough to arrange a dismissal inspection when all repairs have been made, especially if your building or property has been given a notice of a violation.

Hiring a concrete contractor is not much different from bringing in a painter, or any other kind of vendor or service provider. They should be vetted and referenced just as thoroughly—and perhaps even more so, since their work is used constantly and meant to last so long. Repairing a subpar hallway paint job is one thing: tearing out and re-pouring even a section of sidewalk is a much bigger deal, and one that can cost a building dearly if it's not handled promptly and properly.

The professionals agree that the key—as with so many building-related issues—is preparedness, which in the case of sidewalk maintenance starts long before any cracks appear. Vetting your contractors properly, having a snow-and-ice removal plan in place before the first flakes fall, and making sure your building has adequate supplies and the right equipment to get the job done safely and quickly is worth its weight in sparkling concrete.

Greg Olear is a freelance writer, author and a frequent contributor to The Cooperator.