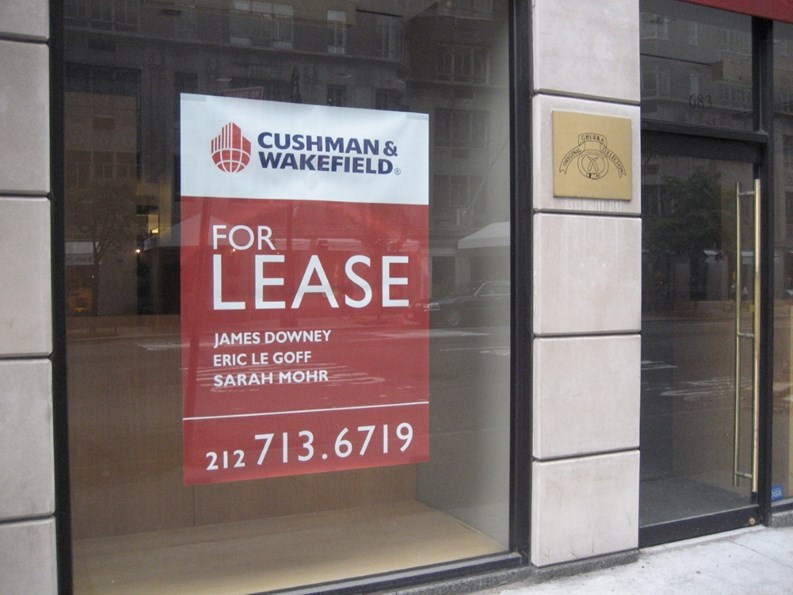 When you walk down many large commercial thoroughfares in New York, whether it’s Fifth or Madison Aevnue in Manhattan, Kings Highway in Brooklyn or Main Street in Flushing, you’re sure to notice many more empty stores than usual—living proof of the current recession. You’ll see them on the side streets, too. Many of these stores are on the ground floor of old rental apartment buildings or in one- or two-story “taxpayers.” But others are on the ground floors of condo and co-op buildings.

For many co-op and condo buildings, rent from ground-floor commercial tenants contributes much of the buildings’ revenue. Many large condo and co-op developments have some sort of commercial tenants on the ground floor—if it’s not stores, it’s often doctors’ or dentists’ offices. However, today’s economic crisis seems to have put this arrangement, once thought of as common place, in jeopardy.

How many New York City co-ops and condos have commercial tenants? It’s difficult to estimate, says attorney Jeffrey Schwartz, a partner at the Manhattan-based law firm of Wolf Haldenstein Adler Freeman and Herz LLP, but he estimates the number between 25 and 30 percent.

And how deeply has the recession hit some of these stores? Is it too early to say whether we can expect a further upsurge in empty storefronts in co-op and condo buildings? It’s tough to make solid predictions—and since some stores have longer leases than others, it has affected some neighborhoods more than others.

One factor in this is the 80/20 rule—a longtime ruling, only repealed in December 2007, that stipulated that 80 percent of a co-op’s revenue stream had to come from cooperators’ maintenance charges, and only 20 percent could come from other sources, such as commercial and garage rents. There are many stores that are still paying below-market rents as a result of this situation, although as their leases come due, the situation may change.

“As many of the leases come up for renewal,” says James R. Wacht, president of Sierra Realty in Manhattan, “you can expect to see an increase in vacancy rates. This is already beginning to happen. All you need to do is walk along the Upper East and Upper West Sides, and you will see lots of vacancies.”

The average commercial lease term in an otherwise residential building has changed over the years. According to Faith Hope Consolo, chair of retail leasing, marketing and sales for Prudential Douglas Elliman real estate, just a few decades ago, it was not uncommon for landlords to sign 20-year leases with tenants. That’s no longer the case. Consolo says that in the near future, she expects leases to be short-term in general so that once the economy recovers, “buildings can seek out higher-paying tenants.”

Michael Kramer, Manhattan real estate consultant and a former director of strategic retail services at Garrick-Aug Store Leasing Associates, says that nowadays, the typical lease is five years with a five-year renewal option. Kramer works with building owners who require the cooperation of the city and the local community to re-purpose underperforming commercial properties.

When there’s an empty storefront in a residential building, people may not think much about it. After all, even in the best of times, storefronts turn over. But if the store remains unoccupied for four, five, or six months, passers-by may start to wonder. What is the affect of fallow retail space on a building—and its surrounding neighborhood?

Many neighborhood residents, especially in areas that are lacking some sort of essential service or who miss a favorite store that was there for years, impatiently look forward to the store being rented, and even speculate on how to draw a particular type of business there.

From the point of view of the condo or co-op residents themselves, the situation often depends on the type of business that occupied the ground floor, says Schwartz. “Restaurants often emit odors and create sanitary problems, so some buildings might actually appreciate the vacancy,” says Schwartz. “If it is a drugstore, bank or something similar, its existence acts as a service, so the residents are disappointed.”

From the point of view of the board, however, an empty storefront can be an opportunity to lease to another business at a higher rent. “Location is everything,” says Kramer. “A new tenant is out there—it may just take more time to re-rent. A building with a strong banking relationship should be able to refinance.”

If you do have a tenant for your storefront whose lease is up for renewal, and you want to keep that business there, how do you negotiate with him or her in these tough economic times?

In this economic climate, says Consolo, “flexibility rules!” Co-ops and condos, she says, need to work with experienced commercial brokers to negotiate fair deals for all parties involved. Still, she continues, some boards and associations are offering shorter-term renewals so that they will be able to renegotiate when times get better.

Kramer says that now is probably not the time to expect big rent increases anyway—banks are no longer snapping up one empty storefront after another for additional branches, “although there seems to be a never-ending appetite for drug stores.”

In some cases, when a building has a small, struggling mom-and-pop business for a tenant, boards or management may want to be flexible and supportive.

Wacht has put out a guide to “dealing with distressed tenants” for property owners. He believes that when deciding whether to grant rent relief to an existing commercial tenant, one should take into account the track record of the business. One with a long-term favorable track record deserves more consideration than one who has a history of non-payments and lease defaults. The value of the space, and the tenant’s prospect of survival should also be taken into consideration. A store selling typewriters or film cameras, for example, would have a low prospect of long-term survival in today’s world of computers and digital cameras.

Wacht also believes that the best way to grant rent relief to a commercial tenant is in the context of a court-ordered stipulation that provides for a warrant of eviction to be executed if the tenant doesn’t comply with the terms of the stipulation. He stresses that such a stipulation should only be executed by an experienced landlord/tenant attorney.

In previous editions of The Cooperator, the end of the long-standing “80/20 rule” for co-ops has engendered much discussion. Removal of the requirement that no more than 20 percent of a co-op’s income could come from outside sources was supposed to have been a windfall for many buildings or developments. However, soon after the rule was changed in December 2007, the market began to go down.

“As a result,” says Consolo, “buildings’ plans for capital improvements, replenishing reserve funds, etc., were put on the back burner in numerous cases. I believe this will change soon and not drag on, but for now, where 80/20 rent levels are still in place, many boards of directors rightly feel that a good tenant at a lower rate is still better than no tenant at all.”

In the past, as we’ve mentioned, many retail chains seemed to be constantly expanding. That’s not necessarily true now, so buildings may have to make do with smaller stores rather than what passes for a “big box” store in a densely-packed urban environment like New York City. Buildings that tried to hold out for “quality stores” (one high-end condo this author is familiar with in Brooklyn insisted on an “upscale” supermarket to match its residents) may also find that they have to compromise.

According to Consolo, buildings are being more flexible out of sheer necessity. “Whereas some previously would not accept restaurant tenants or specific businesses, they are willing to address new possibilities,” she says. “Moreover, rents are lower than before, giving a lot of new businesses a chance to become established.”

“Right now,” says Wacht, “I would advise co-op boards to offer two- to three-term renewals to their existing tenants, even at lower rents. Hopefully at that time, the rental market will begin its recovery and leases more favorable to the building owners can be negotiated.”

All in all, today’s economic situation requires co-op/condo boards and managers to adopt new strategies in dealing with their commercial tenants (or lack of them).

More importantly than all that however, says Kramer, is fostering good community between landlord and tenant with some creativity to allow for a stronger business relationship.

“I find the best advice,” says Schwartz, “is to use a broker that is familiar with renting in co-op and condo buildings they can attract a tenant that is prepared to live with the rules and regulations that co-ops and condos often have. Clearly, cash is king these days, and if retailers do not have to spend it, they would prefer not to. This means that if co-ops and condos either perform or finance build-outs, it could go a long way in attracting the retail tenant.”

In general, the professionals agree that hiring people with knowledge of the market and the rules of the game, plus the ability to gain access to retailers who want to establish a presence, is a good strategy—no matter what the economy is doing.