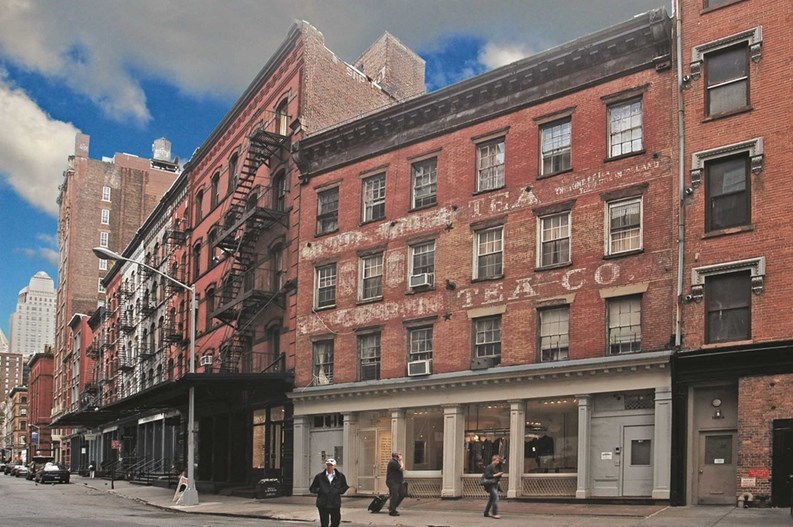 In 2006, Forbes Magazine ranked Tribeca’s 10013 zip code as the 12th most expensive zip code in the country and the number one most expensive in New York City, so the downtown cheap apartment myth doesn’t apply here. Instead expect to find gritty old industrial factories converted into loft spaces, luxury high-rises and historic older buildings.

From Cotton to Commerce

In the 19th and 20th centuries, Tribeca was known as the center of the cotton and textile trade. In the 1850s and 1860s, the area was known primarily as a commercial center with numerous store and loft buildings constructed along Broadway.

Notable buildings that were built in Lower Manhattan during this period include the Powell Building on Hudson Street, which was designed by Carrere and Hastings and built in 1892, the New York Telephone Company building at 140 West Street and a row of neo-Renaissance white buildings built at the end of the Civil War in 1865 and the former New York Mercantile Exchange at 6 Harrison Street.

Development in the area was brought on by the extension of the IRT Broadway-Seventh Avenue Line that opened in 1918 and the widening of Varick Street during subway construction. These expansions resulted in better access to the area for vehicles and for travelers using public transportation.

A few years later in 1927, seven years of construction began; the Holland Tunnel opened connecting Jersey City, New Jersey to Lower Manhattan in what is now the northwest corner of Tribeca, providing even easier access to the area. The 8,558-foot tunnel is one of the earliest examples of a mechanically ventilated design. Eighty-four fans, in four ventilation buildings, create a floor to ceiling air flow across the roadway at regular intervals, via systems of ducts beneath and above the roadway. The fans completely change the air inside the tunnel every 90 seconds.

Despite the easy access to the area, though, Tribeca’s industrial base had pretty much vanished by 1960.

From Grit to Glamour

The abundance of empty commercial space attracted many artists to the neighborhood in the 1970s. Around that time, a group of Lispenard Street artists/residents decided to legalize their live and work situation just as their SoHo neighbors had done. The Lispenard Street residents decided to name their group the Triangle Below Canal Block Association, and, as activists had done in SoHo, shortened the group’s name to the Tribeca Block Association.

Shortly after, the conversion of dank, gritty old industrial warehouses into beautiful loft spaces began in earnest. The large scale conversion transformed the area into an upscale residential area.

In 1996, the Tribeca Open Artist Studio Tour was founded as a non-profit, artist run organization with the mission to empower the working artists of Tribeca while providing an educational opportunity for the public. For 15 years, the annual free walking tour through arts studios in Tribeca has allowed people to get a glimpse into the lives of Tribeca’s artists. Anonymous high-rises have sprouted up next to historic, old buildings and expect to find luxury apartments adjacent to city government offices in the neighborhood.

Trulia, a real estate website, lists the trendy lofts for anywhere from $500,000 to upwards of $12 mllion for a premium penthouse location.

Many families are attracted to the area because of a popular 1.6-acre park—Washington Market Park—that borders Greenwich, Chambers and West Streets and because of the area’s educational institutions. Stuyvesant High School, one of New York City’s prized specialized science high schools, as well as PS 234, an elementary school considered one the best public schools in New York City, are both located in Tribeca.

Families are also attracted to the recent development of Pier 25. In May 2005, Governor George Pataki announced the long-anticipated allocation of $70 million for the rebuilding of the Tribeca portion of the Hudson River Park.

Located between Franklin and North Moore Streets, the rebuilt Hudson River Park Pier 25 will be home to a miniature golf course, beach volleyball courts, a children’s playground, a Water Taxi dock, and an artificial lawn on the western end.

Meanwhile, Pier 26, between North Moore and Hubert Streets, is the planned home of a community boathouse and waterside café. Historic ships will be moored between the piers, while a mooring field will be available south of Pier 25.

The area’s profile has also been significantly raised by The Tribeca Film Festival, a festival that was founded in 2001 by Academy Award winning actor and neighborhood resident Robert DeNiro and film producer Jane Rosenthal. The festival recently celebrated its 11th anniversary. Since its inception the festival has screened over 1,400 films from over 80 countries and generated an estimated $750 million in economic activity for New York City. The 12th annual Tribeca Film Festival will be held April 17– April 28, 2013.

Brunch is a popular pastime in Tribeca. The neighborhood is chock full of cuisine options for the combination breakfast/lunch meal. Bubby’s restaurant on Varick Street continues to be popular as well as Bouley Bakery on West Broadway and the Odeon on Broadway.

So if you’re looking for a great trendy place to live or just to visit, don’t forget the Triangle Below Canal Street. It’s the place to be.

Christy Smith-Sloman is a staff writer for The Cooperator and other publications.