Do not show again [X]
By Keith Loria   2008 Feb Neighborhoods 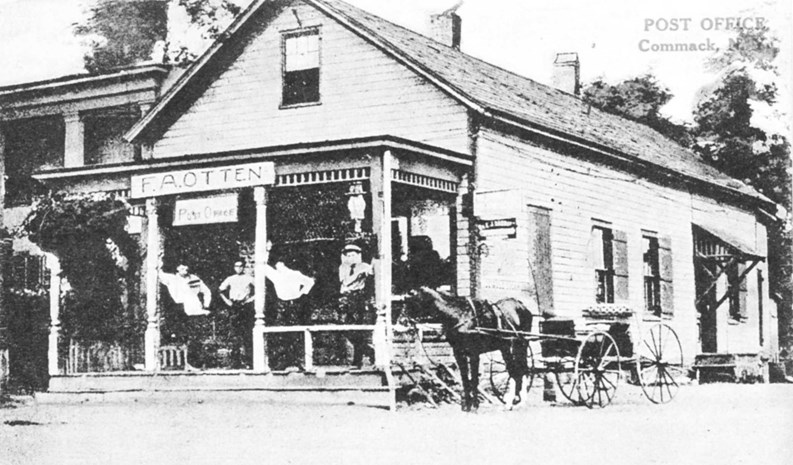 Back in 1900, a little village sprouted up on Long Island called "Comac" along the Huntington/Smithtown town line. Located in the little hollow created by the gently rolling hills that surrounded the intersection of Jericho Turnpike and the Commack/Townline Road, it was a cross-roads community that stretched out to the north, south east and west from Comac Corners.

"Comac is a name derived from the Algonquin Indian word of Winnecomac which means "pleasant land" or "beautiful place" and it was the name that the native inhabitants gave to the region," says town historian Brad Harris. "The little cross-roads community was known as Comac at the turn of the last century and then suddenly, around 1906, the spelling of the name changed to Commack. Why? Apparently the mail for Comac kept getting mixed up with the mail for Coram and the U.S. Postal Service changed the spelling of the name to end the confusion."

According to the Smithtown Historical Society, the Smithtown portion of Commack was originally part of Richard Smythe's colonial land grant in 1665 for the town of Smithtown, and part of another land grant known as the Winnecomac Patent in 1689. Settlement in the Comac area was mostly by homesteaders who were farmers and some of their pre-Revolutionary War houses are still to be found in the area. By 1783 there were enough residents in Comac to form a Methodist congregation and by 1789 the congregation erected its first church that is still standing on Town Line Road just north of the Commack Corners.

Commack, at the turn of the century, was a thriving, bustling little village that had a sizeable population and a history that was already over two hundred years old.

"Commack had two hotels, a general store, a candy store, a large centrally located school building (the Frame School, 1899-1924), a wheelwright shop, a blacksmith, a butcher shop, a Methodist Church, a Presbyterian Church, a cabinet maker, sawmills, racetracks and many large homes and farms," says Harris. "Commack also had its share of wealthy and influential residents."

Although there are no co-ops and just a few condominiums in the area, there are two main developments that attract a lot of attention; The Hamlet and Tara Estates.

Although there is no central shopping area in Commack per se, residents can visit nearby Northport or Smithtown to experience walking through a small village shopping square, complete with a bustling Main Street.

"I think the reason people come to Commack is because of the school system," Power says. "It's one of the best on Long Island."

Internationally, Comac was known as the village where famous trotters were bred and trained, and the Burr family established one of the most important and influential horse training schools in the nation. Known as the Burr Equine Educational Institute, the school for trotters was run from the 350 acres of land that Carll S. Burr owned on the south side of Burr Road, where the Burr family mansion still stands today.

"Burr specialized in the breeding of Hambletonians and in the training of trotters and his work with some of the finest trotters in the country brought him wealthy and famous patrons," Harris says. "President Ulysses S. Grant, H.O. Havemeyer, J. Pierpont Morgan, William H. Vanderbilt, Robert Bonner, ex-governor Leland Stanford, and Charles Backman all brought their horses to Carll S. Burr. This patronage ensured Carll S. Burr's financial success and enabled him to build the mansion on Burr Road."

Burr and his father built Suffolk County's first one-mile trotting track on the spot that Commack High School stands today. Horse racing fans from all over Long Island and New York City flocked to watch trotting races until laws against betting on the ponies came about in 1900. The track disappeared about 15 years later.

The World At Work

Several international events would define where the village was going. During World War I, the opening of Brindley Field brought WWI closer to Long Island residents.

"Brindley Field was a satellite training camp for the Army Aero Squadrons which were stationed at Mitchell Field," Harris says. "According to Henry Shea, there were usually about 1,000 men and 20-30 Curtiss Jenny aircraft stationed at Brindley Field. The presence of the large Army airfield brought hundreds of sightseers, who came on weekends, from all over Suffolk County to watch the Jennys engage in mock aerial combat."

The presence of this airfield in Commack helped bring electricity to the town as power lines were extended south from Northport down Larkfield Road to the airfield, which was ablaze with light at night. This led to the electrification of Commack when the war was over.

"Life in Commack went back to the way it had been before the war," Harris says. "The population of the town was once again just a few hundred people and most people were farmers trying to live off the land. There were about 30 farms in Commack, some small like the one owned by the Morelands with 40 to 50 acres, and others huge like John Carll's farm in southern Commack which had over 2,000 acres."

After the first world war, Commack farmers grew vegetables such as cabbage, potatoes, corn, broccoli and cucumbers. According to Howard Moreland of Moreland Farm, pickles were the big "money crop" in the 1920s, until a fungus got into the cucumbers and made them impossible to grow. Farmers then turned to potatoes as their cash crop. Soon everyone in Commack was growing potatoes.

"The demand for potatoes led Commack farmers to look for experienced help in growing potatoes, and this led to the influx of a number of immigrant farmers and their families into Commack," he says. "The federal census for 1920 shows that Commack had a population of 764 people with immigrant farm families from Italy, Sweden, Germany, Ireland, Scotland, Poland, Russia, Austria, France and Lithuania."

Commack was hit awful hard by the depression and farmers struggled to hang onto their farms.

"Many farmers went bankrupt. It took a long time for the farmers and their families in Commack to recover from the lingering effects of the depression," Harris says. "Then in the early 1950s, USDA agricultural agents found the golden nematode in Commack's potato fields and put farmers out of the potato business." A nematode was a parasitic worm that invaded the potato crop.

In the 1950s and '60s the farming community of Commack was transformed from a little cross-roads country village into a densely populated suburban community. The explosive growth that Commack experienced occurred over a 12-year period from 1954 to 1966.

"In 1954, Commack had one school, 256 pupils and a total population of less than 800. By 1966, Commack had 11,368 pupils, 38,000 residents, and 17 schools," Harris says. "This explosive growth had resulted from the pent-up demand for housing that happened during and after WWII, and because of the availability of open farmland in the village of Commack."

As the decade of the 1970s began the Commack community continued to grow until its population approached 40,000.

According to Harris, the 1980s and 1990s brought some significant changes to Commack. "Housing developments had been carved out in the last remaining open woodland spaces in Commack and today there is very little undeveloped property remaining," he says. "Condominiums have been built in Commack and 'empty nesters' have found homes in places like The Hamlet rather than leaving Commack."

Commercial development along Jericho Turnpike, Veteran's Highway and Commack Road has continued unabated. Many older shopping centers have been given facelifts. The Commack arena, the roller skating rink and the drive-in movie theater disappeared to be replaced by modern brand name stores. The last of the historic homes and farms that once fronted Jericho Turnpike have slowly but surely been demolished as strip shopping malls have replaced them.

"The modern suburban landscape of Commack is a far different world from that of the little country village of Comac. Old-timers who remember what Commack was like before World War II must really experience 'culture shock' whenever they pass through Commack Corners today," Harris says. "But when one gets away from the major arteries of traffic and wanders into some of the beautifully landscaped and treed developments of Commack, one readily discovers that Commack is a beautiful place and a nice place to live."