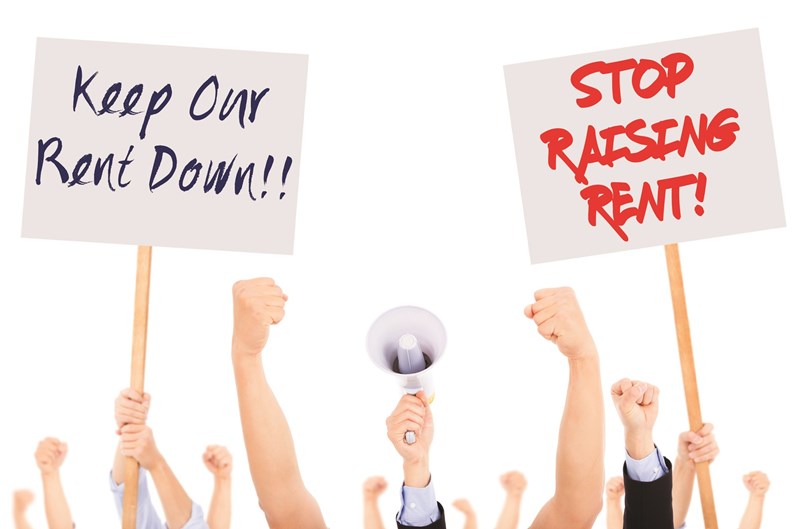 Owners of co-ops and condos in New York are apt to find that the neighbors down the hall live according to a different set of rules and often pay less then they do for the same apartment.

Thanks to the state law in effect when most cooperatives and condominiums were converted from rental properties, called The Martin Act, a large segment of their population is likely to consist of rent-regulated tenants.

According to Manhattan-based real estate attorney Helene Hartig, “The Martin Act was designed to give the tenant stronger protection.” It was enacted, she said, because, “there was a concern when the conversions started in New York that the tenants would be forced out of their apartments.”

To Evict or Not Evict

The Martin Act allows building owners to convert their rental buildings according to one of two schemes, the “eviction plan” and the “non-eviction plan.”

The eviction plan requires 51 percent of renters to purchase their units. “That didn't work out that well for developers,” says Hartig. “Tenants organized and formed tenant associations and had the famous ‘no buy’ pledges. It wasn't a sellout of the whole building as they had hoped.”

Almost all of the enormous number of residential buildings converted during the co-op boom of the 1980s were executed under a non-eviction plan, which allows a building owner, the “sponsor,” to convert his or her rental property to a cooperative or condominium as long as 15 percent of the residents buy their apartments.

The Martin Act applies to both co-op and condo conversions, but the vast preponderance of conversions in the 80s were to cooperative.

In the non-eviction plan renters are entitled to continue their tenancy under the terms of the leases they had prior to the conversion. And most of those leases were rent-stabilized. According New York State rent-regulation laws, buildings constructed before 1974, which includes most properties converted during the 80s, are rent-stabilized, which means their rent increases are determined annually by The Rent Guidelines Board in the municipality in which the are located.

Most tenants were and remain rent-stabilized, though a few, those who occupied their units continuously since before July 1, 1971, are rent-controlled, locked in at the rent they paid when they moved in, with slight increases to cover fuel cost hikes.

Rent-controlled apartments, famous for their ridiculously low rents, are disappearing fast. When an occupant dies or moves out, the apartment becomes stabilized, unless a family member can prove they have been living with the original tenant for at least two years, in which case they can keep the unit.

Actually, the days of rent-stabilized apartments are numbered as well, especially in co-ops. Unlike in exclusively rental buildings, in which a rent-stabilized apartment goes free-market only when its rent is above $2700, “once the rent-regulated tenant moves out of a co-op, the apartment becomes deregulated,” explains Dan Wurtzel, president of Manhattan-based FirstService Residential New York.

“Eventually all co-ops will be 100% owner occupied,” he ventures.

The Corporation and the Tenant

Renters pay their monthly rent not to the building corporation or association, but to the building sponsor or the “holder of unsold shares,” an investor who bought the unit from the sponsor at the time of conversion. The owner-landlord is responsible for paying maintenance fees and assessments to the corporation, just like any shareholder.

Fortunately, having renters in the building rarely has a deleterious affect on the co-op’s finances. According to Manhattan-based attorney Robert Braverman of Braverman & Greenspun PC, “Rent-regulated tenants are not a problem, even for a small building, because the landlord’s maintenance payments are based on the building’s annual budget, not what they're getting for rent.”

Of course, with rent-regulation allowing minimal rent increases, owners could find themselves in a negative cash-flow. They were not helped by the ruling this past June by the New York City Rent Guidelines Board, which froze rents for one-year leases for the first time in its 46-year history and raised two-year leases by just two percent.

The Westchester Rent Guidelines Board voted in 1.75 percent and 2.75 percent increases. According to Carmelo Milio, director of property management for Yonkers-based Trion Real Estate Management, “Owners in Westchester felt that a larger increase was warranted, but at the same time the majority of the landlords are happy that there wasn't a rent freeze — that they got some increase. Historically New York City has always been higher than Westchester.”

In theory, operating at a negative cash flow could force a landlord to default on his or her maintenance. But, in fact, defaults are extremely rare. Should the apartment owner fall seriously behind in maintenance fees, says Hartig, “under the General Business Law and the typical proprietary lease or condominium documents the building can instruct the tenant to pay the rent directly to the building until such time as the unit owner is current.”

Living by a Different Set of Rules

One of the more complicated jobs for corporation or association boards and managers is dealing with conflicts between the corporation, shareholder-occupants and tenants, especially rent-stabilized tenants.

According to Neil Davidowitz, president of Manhattan-based Orsid Realty, a residential property management company, “The biggest challenge if there are issues with the rent-stabilized apartments is that the co-op corporation does not have a legal relationship with the tenants — no privity.” Rent-stabilized tenants are ruled by their lease with the owner and the Rent Stabilization Laws.

“They are not bound by any of the bylaws, the proprietary lease, house rules — nothing,” explains Neil. “So the co-op corporation has to address all their issues to the owner of those apartments, whether it is the original sponsor or an investment group.”

In effect, according to Hartig, “renters have what are called ‘super rights.’ For example, if the building enacts a no-dog policy and the tenant wants to get a dog and there is no prohibition in their lease, they can get a dog regardless of what the building’s rules are.”

In addition to exemption from the house rules, rent-stabilized tenants enjoy the right to continuance of any service that was provided to residents before the conversion. They can file a grievance with the Division of Homes and Community Renewal, the state agency that administers rent stabilization, regarding an action taken by the board they claim violates that right.

For example, should the board decide to get rid of an elevator operator and install a new-fangled automated elevator, explains Hartig, “the shareholders don't have any basis to complain because the board is protected by the Business Judgment Rule. But the rent-regulated tenants can go to the DHCR and claim they are being deprived of essential services. They can get a decrease in their rent.”

The landlord will not be thrilled. “Sometimes the sponsor will have something to say about that with the board,” says Braverman. “Whether the landlord/sponsor would be entitled to some kind of credit on their maintenance would depend on how the conversion plan was drafted.”

Go Ahead, Sublet Away

Subletting is another “super right” rent-stabilized tenants enjoy. The bylaws might forbid or severely restrict shareholders from subletting their apartments, but rent-stabilized renters are entitled by law to sublet their unit for two years, at the regulated rate, plus 10% for furniture.

The rent-stabilized renter is allowed to have a roommate, but not charge them more than half the rent. Co-op shareholders are permitted to take roommates as well, according to New York State’s Roommate Law, without board permission as long as the owner resides in the apartment full-time.

The co-op or condo is allowed to restrict renters from using new amenities like gyms, playrooms or roof decks. But it should think twice about doing so, advises Milio. “Excluding renters from building amenities does not make for a good community environment.” Being included makes them more protective of community property, he says. “If you tell somebody they can’t use something, if somebody is vandalizing it that person might turn the other way” — rather than report it to management.

Can We All Get Along?

“I've seen the spectrum,” reports Braverman, “both where owners and rent-regulated tenants are able to live in peace and harmony, and the other side where there is resentment and underlying hostility on both sides.”

Owner-occupants might feel that because renters do not have a proprietary stake in the property they are less apt to take good care of it. It’s like driving a rental car. “If I'm renting an apartment I don't own,” says Braverman, “unless the roof is leaking on my head I'm not sure I really care.” Plus they might feel they are footing the bill for improvements tenants enjoy but get for free. On the other hand, renters might feel they receive less attention from the staff then do unit owners, who are, in effect, their employers.

Despite these potential conflicts, Davidowitz, whose company manages more than 13,000 co-op and condo units, reports, “I usually don't find animosity if in fact the renters are using their apartments in an appropriate manner and not detrimentally affecting their neighbors. In terms of quality of life, I don’t think there’s a real problem.”

Dealing with Quality of Life Issues

When conflicts do arise between owner-occupants and renters, they are handled by the managing agent, just as conflicts between shareholders are, but according to a different protocol.

Should the renter have a complaint, they would contact their landlord. And then, explains Wurtzel, “the owner of the apartment would notify management that there is a noise condition or smoke nuisance, whatever the matter may be, and the managing agent is required to handle that issue in the same manner as if it were an owner.”

On the other hand, if a complaint is registered against a renter by a shareholder, he says, “the managing agent would go to the owner of that apartment and say ‘listen, we have a problem with your tenant,’ and they have to go to their tenant to cure the problem.”

While rent-regulated tenants do have special rights, says Wurtzel, “it doesn’t give them carte blanche to raise hell in the building. Most of the quality of life house rules you find in co-ops are contained in rent stabilized leases as well.”

When Worse Comes to Worst

What if a recalcitrant tenant becomes unmanageable? While the corporation has only indirect power over the tenant and must work through the owner to get redress, it often finds itself in common purpose with the owner.

“Many times the building will join forces with the unit owner to evict the tenant in the event they are doing something illegal,” says Hartig. Potentially it’s good for both of them. The owner could wind up with a vacant apartment they can sell for a small fortune and the co-op or condo earns flip fees and has one more owner-occupant in the building. Banks like to see a high percentage of owner-occupants.

It’s not unheard of for a sponsor or investor to evict a rent stabilized tenant, especially for out-and-out violations of the rent stabilization laws, like operating their unit as a B and B or maintaining a separate, primary, residence. But it’s tough. The owner needs to take the case to landlord-tenant court, which in New York City is famously pro-tenant.

“In this judicial system,” says Davidowitz, “nothing is easy and nothing's cheap. Even if you have four doorman who say they never were there, and you show tax returns, the system allows them to jerk you around for a year and a half.”

“Before you lawyer up,” he advises, “try to mediate the situation on a neighbor-to-neighbor basis to come to some conclusion without incurring legal costs.”