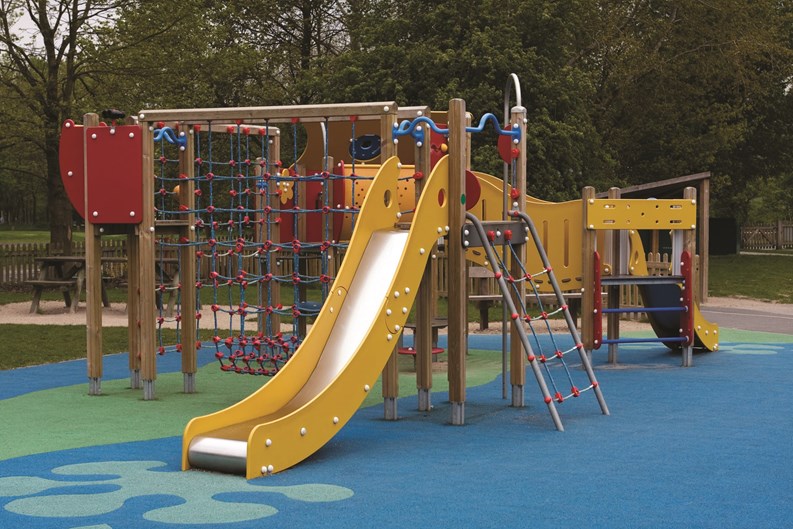 Most kids these days have never had more options when it comes to fun: video games and electronic entertainment of every kind are ubiquitous, and all sorts of mobile toys, too. But amid a national childhood obesity epidemic, the need for children to play and exert the energy that builds up in fast-growing little bodies has never been more critical. Active, outdoor play is crucial not only for the physical exercise and fresh air, but to make friends and build social skills, in both city and suburban communities.

How children play is important, too—it should be fun, safe and healthy for them. These and many other things keep parents of each succeeding generation bringing their kids back to playgrounds, and make having a playground or some well-chosen pieces of equipment a real asset to a condo, co-op or HOA community.

A playground is a desirable amenity with any number of social and health benefits – but we’re also living in a very litigious society, and a badly designed or poorly maintained play area is a liability, not an asset. Avoiding accidents on your building or association’s play equipment is an obvious way to keep your smallest residents safe, of course – but it’s also imperative in order to  avoid lawsuits. There’s quite a lot that’s new in play equipment materials and design, and regardless of whether they themselves have kids of their own, board members and other residents should know something about these play systems.

A few decades ago, playground equipment was pretty basic, and kids were mostly unsupervised as they played. Equipment usually consisted of swing-sets, teeter-totters, some metal monkey bars and a sharp-cornered metal slide or two, along with basketball hoops and maybe a tetherball set-up. In recent decades, playground equipment has come a very long way; the colorless pieces of welded metal set on heat-trapping, unyielding black asphalt is long gone. Today, children play on all sorts of neat interactive equipment, and if they happen to take a spill, their fall is usually softened by industrial-grade foam padding instead of asphalt or pea-gravel.

Asphalt and concrete bases for foundations of playground areas have been getting phased out since the late 1970s and replaced with more user-friendly ones. But not until the 1980s was there a truly concerted push to improve the safety of playgrounds and equipment in them in the US. Industry experts say the newer, more safety-conscious regulations were the result of thousands of reports from emergency rooms and hospitals across the nation about fractures and other injuries suffered by kids who’d slipped, fallen, or gotten cut on old-school play equipment.

Around that time, playground equipment began the shift away from the plain metal-and-asphalt setups to the more colorful, user-friendly options currently on the market. The change accelerated in the 1990s, when the Consumer Product Safety Commission took a closer look at play equipment at schools, parks, and HOAs across the country, with a view to revising and improving safety and materials guidelines. At that time, parks and playgrounds became subject to federal law with the Americans with Disabilities Act (ADA); in addition to meeting new safety standards, such play spaces now also had to be accessible to all, regardless of ability.

Perhaps surprisingly, the consumer market for playground equipment hasn’t really fluctuated over the years. Despite a wobbly economy and the rise of computer games, HOAs and residential buildings still buy and install as much new equipment as in the past. Regardless of economic times, people have kids, and kids need to play – and that has made playground manufacturing something of a recession-proof business. Equipment wears out, too—12 to 15 years is often the lifespan of a given piece of playground equipment.

Playground vendors and manufacturers are located all across the nation, making it relatively simple to upgrade an established play area, or create a new one from scratch. While the offerings of equipment and surfaces are diverse, vendors are happy to explain the options and process by which an old playground is renovated or a new one is built.

While some pieces of equipment have fallen out of favor (metal slides that heat up to skin-scorching temperatures in the summer being a good example), other items – like playsets that incorporate an array of activities like climbing, swinging, sliding, and crawling through tubes and tunnels remain consistently popular. So are pieces made of recycled or upcycled materials.

“Whenever we design a new playground, 90 percent of the time it includes some sort of play structure, meaning an assortment of climbers, panels, slides, bridges and tunnels,” says George Ely, owner of George Ely Associates, an installer of playgrounds based in Carlisle, Pennsylvania.

If a community is planning to install new equipment or construct a play area from scratch, the first step is the same as hiring any kind of contractor: doing some research, then reaching out to three or four vendors or installers to discuss your building or association’s vision, budget, demographics, and available space for the project. “We will guide them through understanding the playground equipment, its installation, and who’s going to install it,” Ely says.

Such guidance often can include a computer-aided mock-up of what the play area could look like after it’s done, and can even include a ‘virtual walk-through’ of different iterations of a design, allowing a board or playground planning committee to ‘try on’ various options before committing to purchasing equipment. Professionals will also take into account factors like the age group or groups of children that will be using the play area. Play equipment is generally geared toward either of two groups: 2- to 5-year-olds, and 5- to 12-year-olds.

Some of the most popular pieces of playground equipment remain the same; but things are changing. They’re getting fancier.

“Composite structures—slides and climbers, are still very popular,” says Keith Davis, a sales rep for GameTime, in Sea Girt, New Jersey, which designs playgrounds and sells play equipment. “But over the last several years, there’s been more of an interest in theme-ing. More playgrounds have been going for a ‘natural’ look, with artificial trees and artificial boulders,” Artificial trees made of fiberglass which kids can climb on are very popular now, he adds.

Obviously, installing play equipment meant for 5-year-olds when 12-year-olds will be playing on it is a big liability. Understanding the needs of the kids in the community and their parents is important, and that’s why involving a pro is crucial. While in the past, do-it-yourself sets that required assembly by the purchaser were popular, these days it’s far more common – and advisable – to have a professional installer set up and test new play equipment. This goes back to safety, and the issue of liability and litigation. An improperly set up piece of equipment could easily cause injury or worse to a child using the set, and cost an association millions in damages. Professional installers work directly with manufacturers, and are specialists. They stand by their work, and the manufacturer stands behind all equipment that is correctly installed and maintained.

Safety on a playground begins from the ground up. In some respects, a playground is only as safe as the surface on which it sits.

Perhaps the most important aspect of any playground installation or renovation is surfacing. The surface of the playground, whatever it is, has a lot to do with how badly a child may be hurt in a major fall. At worst, asphalt and concrete surfaces present the biggest chance of kids getting injured in a tumble, but those old types of surface are rarely seen in modern play areas. Common sense and local and national regulations dictate safer surfaces than the old play-at-your-own-risk type.

There are several types of surfaces used in modern playgrounds. They include unitary surfacing, which is a poured-in-place material that looks like rubber mulch. It’s mixed with a binding agent and can be quickly installed, and spread at varying levels of thickness.

A second type of surfacing is the ‘rubber mat’ variety, which manufacturers and installers refer to as ‘tiles.’ Rubber and wood mulch are also used as a surface on playgrounds. Wood mulch for playgrounds is a far different breed than the kinds of mulch used in flower beds—playground mulch is called ‘engineered wood fiber’ in industry parlance, and is of a very specific size and shape to prevent splinters and compaction of the surface. “If those pieces [of mulch] are too small, they knit together and compact, and the surface becomes too hard,” Daubert says.

There’s also synthetic grass—known commonly under one of its brand names, AstroTurf—which typically has an inch or more of cushion beneath its surface (thickness depends on the potential height of a fall in that spot).

“Falls are a big source of injuries happening on playgrounds,” says Bill Daubert, a project manager for The Playground Pros, a playground equipment installer in Newmanstown, Pennsylvania. “On top of that, you must have safety zones around the equipment, for the kid to fall. You need at least six feet around a playground structure. For swings, your safety zone is two times the height of the crossbar, front and back.”

Once a playground is installed, maintenance can be contracted out to an installation company, which will have workers come inspect the play area on a regular basis – usually a couple of times per year. But play areas can get a lot of use, and may need more attention, depending on wear-and-tear, weather damage, and other factors. “To have someone maintain it is great,” says Davis. “But vandalism happens all the time. That play area should be checked as often as possible.”

One way to limit potential liability from accidents on a playground, obviously, is to ensure that it’s well maintained. Another way is to make sure people know the rules of the playground. Any playground or ‘parklet’ should have a large, easy to read sign that spells out the rules of the space, including any age limits on those who can play there, as well as rules regarding adult presence in the space. Many play areas specify that no adults may enter unless they’re in the company of a child of appropriate age for the equipment.

Overall, playgrounds and play equipment are an attractive, valuable amenity for any multifamily community. They add value, encourage community spirit, and offer kids and adults alike a place to socialize and exercise, all on the grounds of their own home. Smart planning, proper installation, and regular maintenance can ensure that your community’s play space remains a safe, fun, and much-loved amenity for years to come.

Jonathan Barnes is a frequent contributor to The Cooperator, a freelance journalist,  architecture, engineering and construction (AEC) writer. 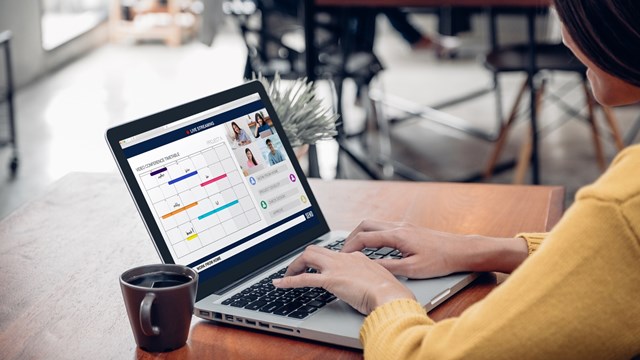 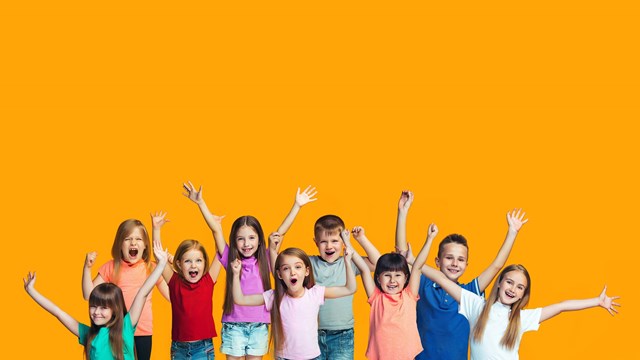