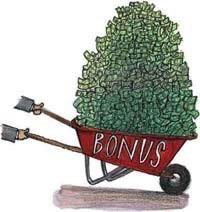 One of the fundamental truths about condominium life is that, eventually, your building will need extra money. A leaky roof, an inefficient boiler, busted pipes, elevators that don't elevate—the list is endless.

If your board has planned well and maintained a substantial reserve fund, it will probably have the cash on hand to deal with a broken boiler or leaky roof. But not all unit owners like to contribute today for what may befall the building tomorrow. What's more, some events are hard to anticipate. Lawsuits arise that can quickly drain a condominium's operating funds. Building systems often ignore their useful-life schedules.

When the unexpected does occur—or when existing reserves are inadequate to pay for needed repairs or capital improvements—condominium boards and managers often look with envy upon the co-op building next door. Co-ops, after all, have a fairly simple option available to respond to a cash crunch: they get a mortgage. But for cash-strapped condominiums, life isn't so simple. Condominium boards sometimes feel helpless, believing that they are prohibited from borrowing money for the first five years of their condominium's existence, and that they must obtain unit owner consent prior to borrowing. Too often, this leaves them with just two choices, neither of them particularly appealing: they must either forego needed repairs, or impose an invariably unpopular special assessment on the unit owners.

Good news: That's not true. Condominiums don't necessarily have to wait five years or get unit owner consent in order to borrow money. Here's why:

The Right to Borrow

The right of condominium boards to borrow money on behalf of the condominium is governed by Section 339-jj of New York's Real Property Law (otherwise known as the Condominium Act). The legislature added this section to the existing law in 1997.

According to 339-jj, if your condominium's declaration or bylaws give the board of managers the right to borrow money, it may do so to whatever extent those documents authorize it to. If your governing documents require consent by 51 percent of the unit owners—or 75 percent or 90 percent—then you must comply with those requirements. But if your condominium's governing documents allow the board to borrow money on its own initiative, without any unit owner consent at all, it may do that too. (Note that, in some instances, a condominium board's borrowing authority can be limited by other bylaw provisions, such as limitations on how much money the board may spend on anything—regardless of how it obtains the money—without unit owner consent. Speak with an attorney if your condominium's bylaws contain such conflicting provisions.)

It's only when your condominium's declaration and bylaws are silent on the board's authority to borrow money that the board must wait until five years have passed from the first conveyance of a unit, and must get the consent of a majority of the unit owners.

The confusion over this issue stems from the way Section 339-jj is written. The first paragraph of Section 339-jj contains two sentences. The first sentence says simply: "To the extent authorized by the declaration or the bylaws, the board of managers, on behalf of the unit owners, may incur debt." Notice that the sentence doesn't mention any five-year waiting period or need for unit owner consent.

The second sentence of Section 339-jj says: "In addition, subject to any limitations set forth in the declaration or the bylaws, the board of managers, on behalf of the unit owners, may incur debt for any of the purposes enumerated in [339-v(2)(b)], provided that (a) such debt is incurred no earlier than the fifth anniversary of the first conveyance of a unit, and (b) the incurrence of such debt shall require the consent of a majority in common interest of the unit owners." (emphasis added)

Over the years, many people have misinterpreted these two sentences as meaning that the limitations contained in the second sentence—five years and unit owner consent—apply also to the first sentence also. (Incidentally, those that have misinterpreted the section shouldn't feel bad. The New York State Senate that passed the law misinterpreted it too. It's Memorandum in Support of RPL 339-jj says: "The bill amends section 339-jj of the Real Property Law to allow the board of managers of condominium buildings to incur debt for capital purposes with the consent of a majority of the unit owners. Debt cannot be incurred earlier than the fifth anniversary of the first conveyance of a unit." But that's not what the law says. And it's probably worth noting that the Senate didn't even get the basics right. The bill didn't amend Section 339-jj; it amended Section 339 by adding Section 339-jj.)

The misunderstanding is in ignoring the phrase "In addition" at the beginning of the second sentence. Joel E. Miller, Esq. and Matthew J. Leeds, Esq., the co-chairs of the committee that drafted RPL 339-jj, in their 1999 St. Johns Law Review article, "Condominium Act Gives New York Boards of Managers Effective Borrowing Ability," said:

It is clear, therefore, both from the letter of the law and the words of those who wrote it, that if a condominium's declaration or bylaws give the board the right to borrow money on behalf of the condominium, it may do so to whatever extent those documents authorize. It needn't wait five years or get unit owner consent unless the declaration or bylaws require them to.

That said, just because this is how the law reads doesn't necessarily mean a court will agree. After all, legislative history—even by legislatures that don't seem to have understood what they were signing—can carry more weight in court than do Law Review articles; even ones written by the people who wrote the law in the first place. If your condominium is in need of funds, speak with an attorney about how to proceed.

Jay Nussbaum is an attorney with Ginsburg & Redmond, P.C., in Westchester County, New York, and is the former lead editor of the Community Association Management Insider.