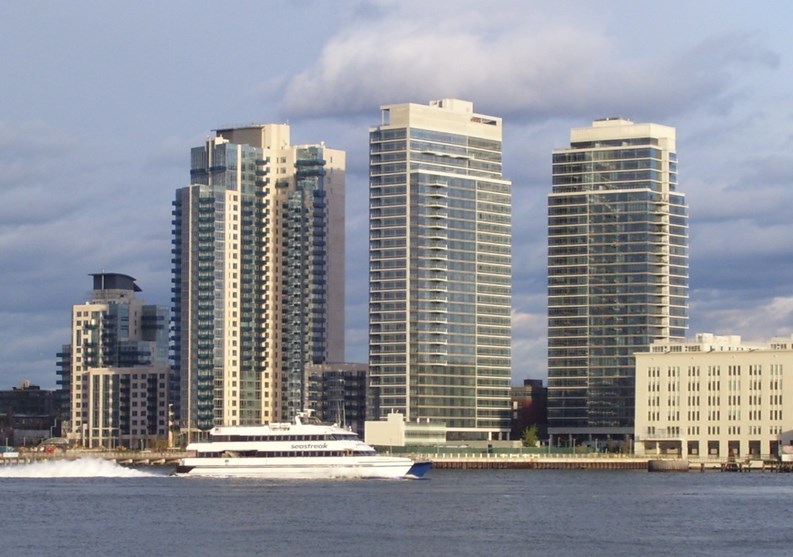 Williamsburg suffers from multiple personality disorder. Just one subway stop  away from Manhattan in the Brooklyn neighborhood, you’ll find a large Hasidic Jewish community, a glut of ethnic enclaves, including  Polish, Puerto-Rican, Dominican and Italian, a working-class neighborhood, and  a hipster theme park (hipster: by definition, is one who possesses tastes,  social attitudes, and opinions deemed cool, by cool people).

Thanks in part to a hyperactive gentrification process that spurred an explosion  of theater, art and music venues, not to mention a culinary scene that rivals  Manhattan, Williamsburg has gone prime time. The sitcom 2 Broke Girlschronicling the lives of two struggling waitresses at a Williamsburg diner who  aspire to open a cupcake shop, debuted on CBS during the 2011-12 television  season. Storylines have included a fight over a Strokes T-shirt in a  Williamsburg Goodwill thrift shop and a ‘90s-themed party to repay a student loan debt.

With its mish-mash of cultures, numerous cafes, restaurants, boutiques, vibrant  art scene and close proximity to Manhattan, Williamsburg is considered to have  some of the most desirable real estate, outside of New York City. Williamsburg  borders Greenpoint to the north, Bedford-Stuyvesant to the south, Bushwick and  Ridgewood, Queens to the east and the East River to the west.

In 1638, the Dutch West India Company purchased the land that is today’s Williamsburg from the local Native Americans. The area was comprised mainly of  farmlands, rolling hills and meadows, surrounded by bodies of water.

Around 1792, Richard Woodhull, a wealthy New Yorker and operator of a ferry to  Manhattan, purchased 13 acres near what would later become Metropolitan Avenue,  with hopes of attracting wealthy industrialists to suburban life and relief  from overcrowded conditions in Manhattan. Mansions built by Manhattan’s elite soon began popping up along the shoreline.

When the Erie Canal opened in 1825 it turned New York into “America’s preeminent seaport.” The Canal’s connection to markets in the Midwest resulted in a manufacturing boom in  Williamsburg. The shore that was once home to wealthy New Yorkers was soon  filled with factories, sugar warehouses, oil refineries, printing facilities  and cast-iron manufacturing companies. Along with the industrial boom came smoky pollution, smog and bleak, dirty  streets, and a fresh wave of German and Irish immigrants looking for jobs.

A Tree Grows in Brooklyn

The opening of the Williamsburg Bridge on December 31, 1909 was significant. The connection of the Lower East Side to Williamsburg brought in a flood of  Jewish, Italian and Slavic immigrants. The population of the area swelled to over 250,000. By 1917, Williamsburg was  the most densely populated area in the greater New York area, with 5,000 people  crammed into a city block.

Betty Smith’s 1943 novel “A Tree Grows In Brooklyn” depicting the hard knock story of an Irish-American family struggling to  survive in the early 1900s in a dilapidated Williamsburg tenement whose  children attend a squalid, overcrowded public school was right on the money. By the 1930s, Williamsburg was a poverty-ridden slum.

In 1938, after two years of construction, and millions of dollars, the low rent  Williamsburg Houses opened under the auspices of the Housing Division of the  Public Works Administration (PWA.) The 20, four-story, residential buildings  occupied 12 city blocks and was the country’s first public housing development for low income families. New York City Mayor Fiorello LaGuardia eagerly endorsed the project.

As Soho became gentrified in the 1980s and priced artists out of the pricey  neighborhood, many left Manhattan for Brooklyn in search of large loft spaces,  cheap rents and easy New York City access. The artists and bohemians eventually landed in Williamsburg. Underground  theater, music and unlicensed performance spaces operating out of abandoned  industrial buildings soon opened. By 1996, Williamsburg had an artist  population of 3,000 and the numbers were growing.

From Boom to Bust?

On May 11, 2005 the New York City Council passed a bill spearheaded by Mayor  Michael R. Bloomberg, rezoning Williamsburg’s most desirable sections—the blocks surrounding the Bedford Avenue subway station—for residential construction and the revival of the waterfront. Builders were  now able to build as high as 40 stories and receive massive tax breaks, as long  as a portion of their building was dedicated to low-income housing.

Within six months of the passage of the rezoning bill, 130 new construction  projects were in the works. Developers braced themselves for a stampede of  young professionals willing to pay Manhattan prices, to invade the area.

The recession of 2008 stopped the high density of new construction projects in  its tracks. The following year, Fannie Mae, the country’s most influential mortgage lender, implemented a new policy requiring that  buildings must be 70 percent (previously 50 percent) in contract before  guaranteeing mortgages and the condo boom went bust. Williamsburg today is  bustling with cafes, art galleries, swanky restaurants and hipsters galore and  is the home of actress and singer Zoe Kravitz and British model and socialite  Peaches Geldof, but you’ll also find numerous half-completed buildings, mud pits where luxury condos  were supposed to be built, foreclosed buildings and near empty amenity-laden  buildings.