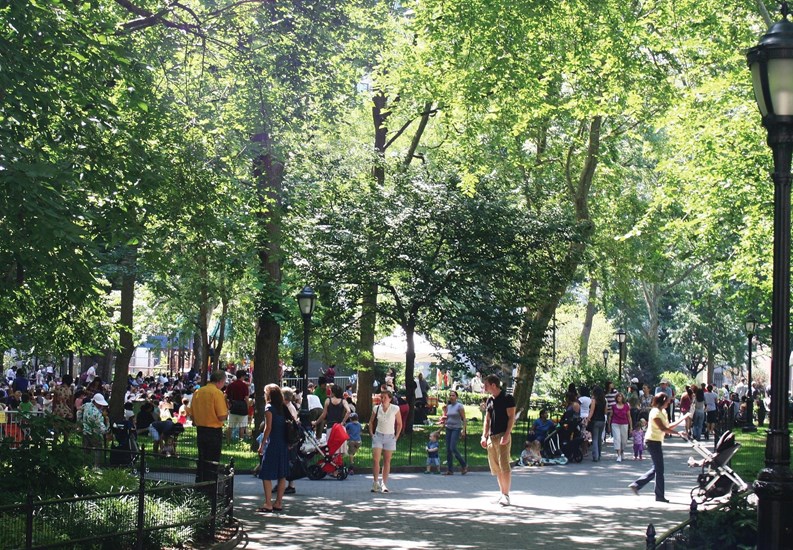 New York City's NoMad [North of Madison Square Park] neighborhood has always flown under the radar, but recently the area has exploded in popularity among New York City's elite.

Former first daughter Chelsea Clinton and her financier husband Mark Mezvinsky, who had their first child Charlotte in September 2014, plunked down a cool $10.5 million dollars for a four-bedroom condo in a boutique building on the northeast corner of Madison Square Park. NASCAR star and New York City real estate connoisseur Jeff Gordon also recently moved into the neighborhood. Other house hunters in the area include supermodel Gisele Bundchen and her hubby, Patriots quarterback Tom Brady.

NoMad is derived from the neighborhood's location north and west of Madison Square Park. It extends from 25th Street to 30th Street between Sixth Avenue and Lexington Avenue. NoMad is bounded on the west by Chelsea, on the northwest by Midtown South, on the northeast by Murray Hill and on the south by the Flatiron district. You'll also find “Little India” known as “Curry Hill” by locals in NoMad as well as a plethora of landmarked office buildings.

The Origins of Baseball

In 1842, amateur baseball players gathered in a vacant sandlot at Madison and 27th street to play their games. Eventually Alexander Cartwright, who many refer to as the father of baseball, suggested they draw up rules for the game and start a professional club. It is believed that Cartwright and members of his club, The Knickerbocker Baseball Club, drew a diagram of the first baseball field. When the club lost their sandlot to development they moved to Hoboken, New Jersey where they played their first game in 1846.

The following year on May 10, 1847 Madison Square Park opened to the public. In a wave of residential development that followed, dozens of brownstones and mansions were erected at a dizzying pace. Well-to-do families such as the Haights, Stokeses, Scheiffins and Wolfes all resided in the neighborhood. Future president Theodore Roosevelt and author Edith Wharton were both born in the area.

Winston Churchill's grandparents Leonard and Clara Jerome lived at 41 East 26th Street. Their mansion eventually became the clubhouse of the Union League Club of New York and later The Manhattan Club (birthplace of the Manhattan Cocktail). The Club evolved into a meeting place for influential Democratic politicians such as Franklin D. Roosevelt, Grover Cleveland and Al Smith.

Around this time landmark houses of worship were founded, such as the Church of the Transfiguration [a.k.a. The Little Church around the Corner], Trinity Chapel [where writer Edith Wharton and Edith Newbold Jones were married] and now the home of the Serbian Orthodox Cathedral of Saint Sava, and the Marble Collegiate Church, in which Norman Vincent Peale served as pastor.

In 1853, plans were in the works for the famed exhibition hall Crystal Palace to be built in the area by the developer Amos Eno but strong public opposition and protests caused the Palace to be relocated to the area around 42nd Street in what is now Bryant Park.

The neighborhood was a meeting place for the Gilded Age elite and a mecca for shoppers, tourists and after theater restaurant patrons.

By the late 19th century a burst of hotels, restaurants, office buildings [many are still standing] and entertainment venues sprang to life around the park. The area along Broadway above the park absorbed into the Tenderloin, a red light district full of nightclubs, saloons, gambling casinos, dance halls and “clip joints.”

Business activity slowly began to eclipse the residential scene in the area and the upper-classes began to trickle uptown. During this time on August 14, 1894 the world's first kinetoscope parlor opened in a former shoe store at 1155 Broadway (corner of 27th Street). For 25 cents, patrons could stand and watch a short film through a shaded peephole. The store had 10 of these machines and netted $120 on its opening day.

In the early 20th century, 28th Street between Fifth and Sixth avenues was dubbed Tin Pan Alley because of the collection of music publishers and songwriters who dominated the American commercial music world at the time. During the height of the Tin Pan Alley years, the 1913 Armory Show, at the corner of Lexington Avenue at 25th Street, was the place to be for the modern art scene. The show attracted artists from around the world.

Along Broadway, the Townsend (1896) and St. James (1896) were the tallest buildings in New York City for a short period. Other notable buildings in the area included The Flatiron Building, the New York Life Building, the Gift Building (now a luxury condominium), The Toy Center (an office complex), The Colony Club for socialites at 120 Madison Avenue (now the Academy of Dramatic Arts) and the Baudouine Building.

During the 1950s, many high end shops and boutiques began to be replaced with shops hawking cheap souvenirs, T-shirts, perfume, luggage and jewelry wholesalers. By this time the area around Madison Square Park was suffering from neglect and petty crime.

The park now features sculptural installations of contemporary artists, hosts concerts and special events like the U.S. Open tennis screenings, baseball games and food fairs, and is home to the popular New York City burger joint Shake Shack (where customers have been known to wait up to two hours for a burger).

With noted chef Mario Batali’s Eataly located near Madison Square Park, it’s not a stretch to find that every fall and spring, Worth Square is home to the popular “Madison Square Eats,” a foodie's delight that features an all-star roster of vendors from top New York City restaurants.

So if you’re looking for culture, fine food and a unique neighborhood in which to plant your roots, go no further than NoMad.

Christy Smith-Sloman is a freelance writer and a contributor to The Cooperator.