Leaks happen all the time. American Leak Detection, a nationwide company (unrelated to the Scooter Libby trial), claims to have discovered 1.4 million leaks last year alone—and that's just one company! Common as they are, leaks can cause quite a bit of damage. The drip-drip of a leaky bathtub is literally the sound of money going down the drain—and if the leak is hidden deep in a wall somewhere, the damage can worsen and spread for months before you even know there's a problem.

Recently, I had the misfortune of being dealt some leak issues of my own. I'd like to share with you lessons that I learned—the hard way—so that other apartment owners might avoid having to go through the same ordeal.

We returned home the last week in December 2006 after spending the holidays in Madison, Wisconsin. On the ceiling in our living room, a few feet from the front door, the popcorn paint was damp and sagging toward the floor—it looked like a gray, upside-down bubble on a pizza crust. Obviously, there was a situation in the upstairs bathroom.

I called the plumber, who was dispatched quickly, and set about shutting off the water, just in case the leak was from the water source. This involved climbing into a closet, unscrewing a piece of plywood, and shining a flashlight into the space beneath the bathtub.

Sure enough, there was a small puddle of water beneath the drain of the tub, and the fiberglass was damp. I also discovered, much to my musophobic (that's an acute fear of mice, by the way) dismay, something else—the recent remains of a well-fed mouse, surrounded by a charming array of droppings and other evidence.

Lesson #1: Mice use water pipes as highways to travel under floorboards and up and down walls.

Indeed, we have two hardy cats and plenty of mouse bait. No matter—when it gets cold, the mice come in, even if they never set their furry little feet in your house or apartment proper. They're still there, scampering from floor to floor and setting up house wherever it's warm and cozy.

According to the Internet Center for Wildlife Damage Management, mice can enter buildings through a hole the size of a dime. "To exclude mice," the site advises, "seal all holes and openings larger than one-quarter inch (0.6 cm) across."

But back to the business at hand. The leak in our home posed something of a mystery. The bathroom is full sized, equipped with a toilet, a sink, and a bath, and we use all three all the time—our two children bathe up there. We'd lived here for almost two years, so why the leak now?

Lesson #2: Leaks can happen for a long time before they're discovered.

And sometimes, they're only discovered when a bad situation gets worse.

"It depends on what the water is leaking into," says Lawrence Ubell, chief inspector for Brooklyn's Accurate Building Inspectors, who does home inspections in the tri-state area.

"If it's a ceiling tile, you know right away. With drywall, it has to find the seam and then come through, which takes longer," he says. "With plaster, there's nowhere for the water to go. Over time it gets loaded with water weight, and the plaster eventually fails."

Some leaks are never detected. Ours should have been, before the damage was done. We should have smelled a rat, so to speak. And we did—we just didn't know what it was.

Early detection is the key to minimizing damages, both to your home and your wallet. There was an odd odor we noticed when the heat went on, a sort of wet-dog smell that we couldn't explain, somewhere in the living room (bloodhounds are good at identifying the sources of smells; humans, not so much).

As it happens, that smell was damp fiberglass being heated by the hot-water pipes. Had we only been able to identify the smell, we might have nipped the problem in the bud.

The next day, a general contractor arrived early. He cut a big hole in the living room ceiling, and removed the wet sheetrock, wet fiberglass, and dead mouse (true be told--I was too squeamish to touch the last).

Then the plumber came. He shone a bright flashlight on the ceiling—now sporting exposed beams—and turned the water back on. Then he turned on the sink. No leak. Flushed the toilet. No leak. Ran the tub. No leak. Huh?

"We should try the shower."

"But we don't use the shower."

"Yeah, but we should try everything."

So we tried the shower—and water cascaded down, through the open ceiling, and into the plumber's waiting bucket. Bingo. As it turned out, my wife had in fact used the shower in early December—a few weeks before the popcorn paint sagged on the living room ceiling.

Bad caulking or worn-out fixtures don't automatically mean you'll spot a leak right when it happens. "The drips might evaporate before they leak through," Ubell notes. "Or it might only leak when a fixture is in use." If the fixture in question is rarely used, or if your apartment is warm and dry, it might take a while before conditions converge to produce a visible problem.

In our case, it took half an hour for the plumber to find the source of the leak, and five minutes for him to fix it. This did have its advantages—the bill for the plumber wound up being a mere $200. Although, as deficient as my home improvement skills may be, I probably could have done the job myself for far less money—and I would have had an excuse to use my caulking gun, which is one of my favorite tools to employ for any given task.

Lesson #5: Some leaks are fixable by non-professionals—sometimes.

"People just don't want to do the work themselves—even though in many cases they can," says Stuart Somerville, the owner and chief inspector for National Property Inspections, in Neptune, New Jersey.

In the case of multi-story, multifamily buildings however, letting a professional contractor take care of finding and fixing a leak is probably the only option, unless your co-op or condo is blessed with a truly outstanding superintendent who has the skills and experience to track down a leak and cut it off at the source. A leak that shows up in the ceiling of apartment #3D might originate in apartment #4D—or it could be coming from somewhere else entirely. If you live in a co-op or condo, it's probably wisest to leave anything more involved than a drippy faucet or showerhead to a pro.

In the case of our leak, the plumber left, and I made plans to have the ceiling repaired. That night, after everything had dried, I gave my son a bath, and it seemed that harmony was restored. And then the leak came back.

Lesson #6: The obvious cause of the leak might not be the only cause.

The plumber returned the next day, a sheepish look on his face. He recaulked the faucet—a spot he'd missed the first time—and changed the handles on the water valves. This time, problem solved.

Lesson #7: Make sure the leak is really fixed before repairing anything else.

But if we had not tested everything, and made sure the repair worked, we might have had to tear the ceiling down twice!

Lesson #8: Leak damage can add up.

The entire project wound up costing about $1,300 to fix—$800 for the contractor to tear the ceiling down, replace it, and paint it, and the rest for the plumber. Also, our lives were disrupted for a good week. And because the ceiling is popcorn paint, which is almost impossible to blend, the patchwork repair, while as good as it could be, is still obvious.

But I got lucky. I got a good deal on the labor, because I'd used the plumber before. Plus, the only family affected by the damage was my own. The bathroom leaked into my own living room—not the living room of a lawsuit-happy co-op resident downstairs, who might have demanded that the popcorn paint job be without flaw.

Such a situation would have been a headache for me, my neighbor, the property manager, and probably the board, too. All because my wife took a shower upstairs instead of downstairs, and we didn't have enough caulk.

In the case of leaks in high-rise or multifamily buildings, "You're looking at structural damage—replacing wood, floor joists, girders," Somerville says. "You have to call in a contractor for replacement work, and that takes a long time."

There was a silver lining in all of this, in a way. I called up my insurance company, and some of the work was covered. The plumbing, I had to pay for—in most policies, you're responsible for wear and tear of that kind. The ceiling damage, however, was covered. After a deductible, but still, it's worth looking into.

So there you have it. Obviously, there are many reasons you might have a leak. Your building's roof might have holes in it, or your neighbor might let his sink or bathtub run over, or a mouse or rat might have gnawed the caulking or insulation around a pipe to shreds, letting the moisture flow forth. Implied in all of this is the tenth and final lesson, namely:

Lesson #10: An ounce of prevention is worth a pound of cure.

Be on the lookout for problems, and make sure your managing agent is too. Make sure water isn't seeping from your pipes into the walls or ceiling of your neighbors. Check your fixtures every once in awhile—according to the professionals, toilets need to be replaced every twenty years or so, and wax rings (which are no longer made of wax) wear out. Remember my story; a bit of caulk, and I'd be $1,300 richer, and my living room ceiling wouldn't look like paper mache. 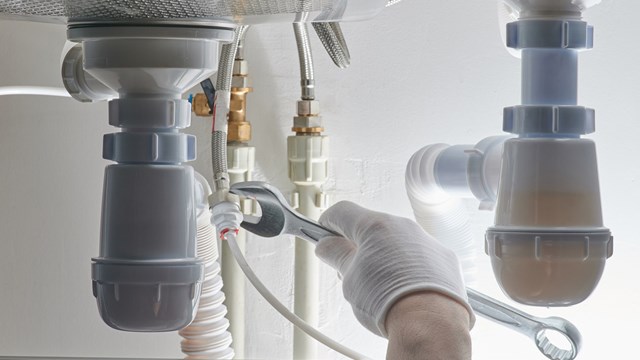