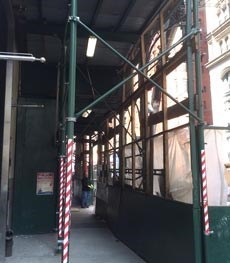 Walk down any street in the city and you’re likely to go under or around one of the ubiquitous steel-and-plywood structures that shade Gotham's sidewalks, more often than not festooned with wheat-pasted posters for everything from the hottest nightclub parties to new movies opening this weekend. They’re called construction sheds, and these blue or green plywood platforms boosted up above street level by crisscrossing metal poles and girders are usually installed on buildings in the midst of an exterior repair program.

It was way back in 1980 when then-Mayor Ed Koch responded to an alarming number of pedestrians being hit by falling debris and enacted a new law requiring that all street-facing exterior facades be inspected every five years. Eventually, the law was updated to become Local Law 11, which read that any façade facing the street or on any structure greater than six stories high in the city needed to be inspected. Local Law 11 became the catalyst for the sidewalk shed and scaffold boom that has occurred in New York over the last three decades.

A sidewalk shed is a temporary bridge-like structure built over a sidewalk to protect pedestrians during construction on or near a building’s façade. A scaffold is a temporary work platform, either suspended from the roof or some other part of a building or built up from the ground, typically with a system of pipe sections.

“They are required to protect the public from the dangers of overhead construction,” says Ken Buettner, president of York Scaffold Equipment Corp. in Long Island City. “If the Department of Buildings (DOB) identifies a dangerous condition on your building—something cracked or broken—they will order you to put up the sidewalk shed for protection while you remedy the condition. If you have scheduled work on a building or are doing new construction or a major alteration, those kinds of projects also require public protection.”

Local Law 11 inspections are the catalyst for much of this exterior work being done, Buettner continues. If there’s a chance of something falling on someone, you’re going to need protection. A sidewalk shed is engineered and constructed to stand on its own on the sidewalk, without being secured to the building or the structure.

On the other hand, says Buettner, “A supported scaffold is required at certain intervals of height and length to be secured to the [building] structure and become an extension of that structure. Sidewalk sheds are immediately next to but independent of the structure they are serving.”

Suzanne Weiss, senior engineer of quality control at Manhattan-based RAND Engineering & Architecture, says sheds and scaffolds are important to protect the public from harm. “They are needed if unsafe conditions are found during an inspection, during work or sometimes for access during an inspection,” she says. “It’s necessary to scaffold along street facades, usually off-street if it cannot be cornered off, if work occurs above or if there is access.”

Policed By the DOB

According to a DOB spokesperson, there are approximately 8,000 sidewalk sheds in the city, covering nearly one million feet of sidewalks.

By law, all hanging scaffolds must be in compliance with the Building Code of the City of New York. Only a licensed master- or special-rigger or expeditor may apply for a hanging scaffold permit. The applicant—or a designated supervisor listed on the application—must be present on the hanging scaffold during all working hours.

Additionally, the designee must have the tear-off from the rigger’s license and a Designated Rigging Foreman License on-hand during work. All workers on a hanging scaffold must have a Certificate of Fitness in order to work, and must be employed by the company listed on the application form. Finally, a copy of the approved drawings must be on-site during operation of a rig or hoist.

The Buildings Department’s Scaffold Safety Team (SST) oversees the installation and use of suspended scaffolds, supported scaffolds and sidewalk sheds to advance the safety of these structures and the workers using them.

Scaffolds of the Future

Wayne Bellet, third-generation president of Manhattan’s Bellet Construction, says that underneath the metal of the shed, fluorescent or incandescent lighting is required, and is to be lit 24 hours a day, though that rule that has changed through the years.

“Very little has changed considering how long sidewalk protection has been around and how much technology is involved today,” Bellet says. “There was one earth-shattering change that still amazes me. Mayor Bloomberg held a contest, which I thought was the most radical thing that I ever heard in my business.”

Former Mayor Michael R. Bloomberg partnered with the New York chapter of the American Institute of Architects (AIA) to launch a competition called UrbanShed, encouraging designers to come up with innovative reinterpretations of the classic piece of New York’s streetscape. After almost a year, the winning entry was a team consisting of Young-Hwan Choi, Andres Cortes and Sarah Kahn from Agencie Group, a design firm based in the city, which gracefully melded recycled steel and translucent plastic panels into a structure that resembles an open umbrella.

“When I saw the result, I loved it,” Bellet says, but adds that he was dubious about the practicality of the design. The new design is not mandatory, and costs close to the same as any other sidewalk shed, but it’s still unclear how many companies will be changing over to the umbrella model. The first prototype made its debut last year installed in front of 100 Broadway, a 24-story office building in Lower Manhattan.

In most cases, sidewalk sheds are owned by a scaffolding company that will erect it and dismantle it. The building, developer or contractor rents the apparatus while it is in place on their property. There are some contractors—mostly waterproofing companies—who own their own sheds for use on their own projects. Regardless of who owns them, says Buettner, a building owner will still be involved in any lawsuits that arise from a faulty scaffold or shed erected on their property.

“One thing that has been getting very interesting with this in the last couple of years is the question of insurance,” Buettner says. “Liability insurance for scaffolds and sidewalk sheds has become very, very expensive. Most sidewalk shed providers and scaffolding companies have seen increases in their insurance of 25 percent or more per year over the last few years.”

Today, there are a number of insurance policies that building owners have where scaffolding issues are not included—leaving owners exposed to liability—and unless you’re a sophisticated owner, you might not realize that until it’s too late.

As for legal issues, “it’s complicated,” one of our experts says off the record, but adds that anyone involved in the process (the building’s owner, the shed owner, even the worker) could be held liable for any problems.

Signs of Things to Come

While they serve a benign purpose, sidewalk sheds can be an eyesore, especially after the inevitable plastering with posters, signage and graffiti. Pasting posters, flyers, and other media on sheds actually violates the city’s “Post No Bills” policy, but the policy is a police issue and not strictly enforced. Officially though, a sidewalk shed should be green in color, have no advertisements of any sort and include very specific signage about what’s going on at that location.

“Signs found in violation of building and zoning regulations are subject to fines and forced removal,” Weiss says. “Penalties for first time offenses are $10,000 each and subsequent violations are $25,000 each. Each illegal sign is ordinarily issued multiple violations for infractions against various zoning and code provisions.”

In fact, when Mayor Bloomberg was in office, he was well-known throughout the industry as someone who would get very upset when sheds were overrun with posters and ads and would do his part to make sure that fines were levied.

One exception to the rule is that city ordinance RCNY 27.03 allows businesses whose signs are covered by the shed to install a temporary sign on the shed letting customers know where they are.

Scaffold companies and the buildings themselves have seen the value of advertising on their sheds and even though that is against the DOB rules, sometimes they will lease out advertising space. Bellet knows of a certain advertising company that purchased a sidewalk shed company on the hedge that one day the mayor will allow third-party advertising but that has yet to be the case.

In a city known for old buildings and large skyscrapers, there will likely never be a time when it is completely devoid of sidewalk sheds and scaffolding but one day, maybe the look will be more appealing. The important thing to remember is that they keep people safe and will forever be associated with the New York City landscape.