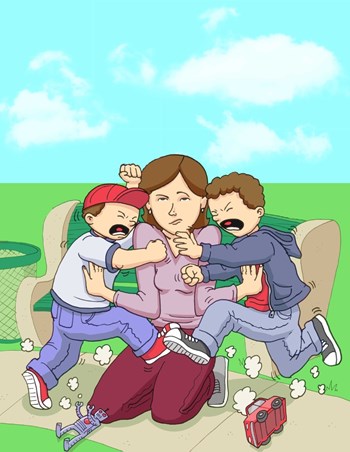 Finding the right balance of involvement between HOAs and condo boards and residents can be like maintaining a healthy relationship with a significant other—you want to be compassionate, responsive and attentive, but not too needy, nosy or aggressive.

With our busy and hectic schedules, associations and boards might run the risk of being apathetic and disinterested in the status and well-being of the building, leading to unbalanced reserve budgets or broken lights in common areas.

While this lethargy can be an annoyance to those who would like a more dynamic and proactive voice regarding the comfort of their home, the opposite side of the spectrum can also be cause for serious concern. An association or board of trustees that oversteps its boundaries, intrudes on the privacy of individual residents and pushes the legal envelope can cause internal sickness, leading to tension, arguments and the end of what should be a long relationship life span.

Power to the People?

The extent of power boards have over the communities they govern does not have to be a mystery, as they are laid out in a building’s bylaws and governing documents, Adam Berenson, vice president and partner of Manhattan-based Dermer Management, explains. These powers are listed in the bylaws, however, misinterpretation can occur. This is when a property manager or attorney is needed for guidance.

“There’s always interpretation but that’s when we step in as a property manager and try to keep the boards on track and if they do try to overstep their bounds we might say, ‘Look, you may want to rethink that.’ But we try to keep them on track and guide them,” Berenson says.

“When you get to something that’s really complicated, you may have to bring in an attorney to clarify the situation.”

While basic position requirements are laid out in the association’s documents, Jane Bolin, founding partner of PeytonBolin PL, a national community association law firm with offices in Tampa, Fort Lauderdale, New York City and New Jersey, finds that a lot of board members do not fully grasp the responsibility their positions require. “I think most boards don’t understand that they’re actually running a not-for-profit corporation, so they treat it like it’s a volunteer position that doesn’t have these fiduciary duty ties to it.”

This unawareness, she says, is the underlying cause for a lot of board dysfunction.

What are the Symptoms?

Some of the most common kinds of dysfunction residential boards are prone to be usually based around the interpersonal relationships between members and the varying (and sometimes clashing) personalities of individual residents.

Steven Weil, PhD, EA, LCAM, the president of Florida-based Royale Management Services, has seen his fair share of recurring conflicts on boards. So much so that he’s established his own set of Jungian-like archetypes.

Despite the name, the only ghoulish thing about the Ghost is his or her complete lack of involvement or interest.

“When you send communication to the board, you never really know whether he actually got it, because you never hear a response,” Weil says. “No matter when you schedule a board meeting, he's never there. And we kind of think of those guys as the ones that wanted their name on the letterhead—that's an issue. If you've got a strong board where you've got three people on a five-member board that are already pretty good at getting together and making a decision, not really a problem. It's an issue when you've got a board that's split, and the guy in the middle just doesn't show up ever to break the tie.”

While friendliness is always an added bonus, it shouldn’t get in the way of making decisions. “There's the split board: We're five members, and two on the left, two on the right, and one who wants to be everybody's friend and hence never makes a decision with either side,” Weil says.

“We call that guy ‘The Friendly.’ ‘I'm friendly with everybody—I don't want to piss anybody off. And I can see it from both sides, but because I'm not willing to take a side, a decision never happens. And we just go on discussing the same thing meeting after meeting until hell freezes over,’” Weil says, explaining the inner dialogue of this kind of director.

He says, “In many cases, these are people with strong personalities that, whether the rules are with them or against them, can run over everybody else in the room, including their fellow board members. Sometimes just their presence is intimidating—sometimes intended, sometimes not.”

Compromise is essential in every relationship, boards included. But there’s a limit. Trying to please everyone is a fruitless pursuit that will only limit decision-making.

The Pleaser operates under the idea that, “ ‘Every time something comes up, we should poll the unit owners, we should see what the unit owners think. Let's see if we can get everybody on our side before we do anything.’ ” And that often means that you don't get stuff done that needs to be done,” Weil says. “Plus, unit owners aren't in the same position necessarily as a board member. They're not required to take the time to learn all the facts that go with an issue, and to make the informed decision based on the material that board members are presented with.”

Troublemakers like the above can mean that quarterly meetings get very awkward, or it could be even more damaging. When the board no longer functions properly, the community it’s supposed to govern can quickly devolve into a mess. Depending on the level of dysfunction, these issues can cost associations extra time and money, can delay projects and ultimately, force a management company to quit. Board troubles can even affect unit and shareholder sales, says Sandy Adelsberg, a sales and leasing agent with Veritas Property Management, LLC, in Manhattan.

“Well, there are many things that can go down. If the building isn't financially soluble, banks will refuse to lend into that building,” Adelsberg says. “How does that affect everyone? If somebody wants to sell their apartment, their buyer may not be able to get a mortgage because the building is not operating properly, or operating in the red. Co-ops are mandated to operate either in the black or at a break-even at the least. This doesn't all apply to condos in particular, because condos don't have access to money the way co-ops do, strangely enough,” she says.

Legal ramifications are also to be expected when a board is in peril. According to Bolin, a defective board can lead to an increased number of potential claims of breach of fiduciary duty and/or possibly a violation of various state and federal laws concerning the unit owners’ rights to use and enjoy their property.

And although it’s hard to hold a board member personally accountable due to the business judgment rule that protects members unless their actions are criminal, they can still suffer the ramification of litigation because all residents, including board members, are impacted when a community is sued.

According to Alex Kuffel, the president of Pride Property Management Corp. with offices located in Manhattan and Englewood Cliffs, New Jersey, preventative care is essential to keeping a board from losing its focus and function.

“The best way to get back on track is to stay on track,” Kuffel says. “I suggest making the election to the board more ceremonious in the sense that there is an official guide to being a board member and an oath of office. Board members need to be prepared to give up making decisions to fit their circumstances, to forego being a neighbor when tough decisions need to be made and to work collectively on the ultimate goal, which should always be to appreciate the asset.”

When preventative care has failed and issues have essentially rendered a board useless, it’s time for an intervention—enter the property manager to save the day (and the building).

“A good property manager doesn’t just sit back 100 percent of the time and let the boards just go off on whatever they want to do,” Berenson says. “A good property manager will interject themselves in a humble sort of way so you get the response and rational minds thinking. That’s what our biggest role is at a board meeting. They do get emotional. A particular board member might get emotional about another shareholder or owner because they’re doing something against the condo rules and they’ll want to fine them and do this or that. You can’t just willy-nilly make those decisions. That’s where a good property manager will say, ‘Look, let me go have a conversation and see if we can resolve this matter without any fines or legal actions and keep it all moving forward rather than to get into battles with other unit owners and shareholders.”

After years of experience in dealing with less than harmonious boards, Bolin was inspired to create “Peyton Bolin MBA: Mastering the Business of Your Association.” The program, which will officially launch in December, addresses why associations should view themselves as businesses and how adopting this perspective will benefit their communities. The customizable program is comprised of several learning modules addressing topics such as creating a mission, vision and values and defining board member goals and responsibilities.

And sometimes, when all else fails, it just takes hitting rock bottom for a board to get the self-motivation needed to regain alignment, and ultimately, functionality.

“They need to get to nothing and say, “OK, we have to create a plan of action together,’” Bolin says. “They made a commitment. Going to a board meeting once a month or once a quarter, if they think that’s their commitment, that’s not their commitment, that’s just the meeting. They need to actually schedule some time to get together and I would say a strategy session. What are the goals we want to accomplish? What are the issues?”

“Because right now,” she continues, “what I experience is that they’re constantly doing what’s next. Think and plan and actually look at the big picture and focus on what needs to be happening now instead of always putting out fires,” Bolin says.

Enjolie Esteve is an editorial assistant at The Cooperator.