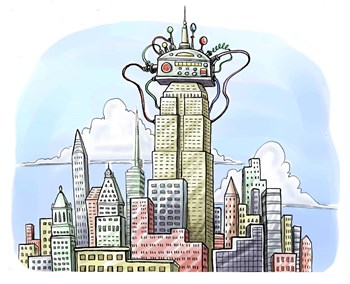 Technological applications to residential building life are becoming more prevalent, and in some cases, they’ve even become more affordable than in the past. An “intelligent” building is able to monitor its environmental, mechanical, and lighting (among other) systems, through a computerized network of electronic devices. Maintenance, communications, security, and other residential building functions are now being handled by these new systems, whose upgraded operations are helping building personnel do their jobs more effectively.

State-of-the-art gadgets do everything from moderating the building’s heating/air conditioning systems to managing all of the window blinds of a unit to provide optimal light. Technological improvements also are lessening the energy use of buildings, by running systems more efficiently and more cheaply. Some of these tools don’t require large-scale renovations. Wireless technology is increasingly being used to upgrade buildings.

Some of these technologies will make residents more comfortable, says Steve Kuehn, a spokesman for Siemens Building Technologies, Inc. in Buffalo Grove, Ill. “Wireless thermostats can go into a room that’s usually cool, and residents can adjust the thermostats,” he says.

Residents can begin to learn about building technology by attending trade shows, or by reading magazines and other industry-related publications. In addition, they can consult with groups such as the Building Owners & Managers Association (BOMA), the Institute of Real Estate Management (IREM), or the National Apartment Association (NAA), all of which have New York chapters. The Internet should be an integral part of any search for info on building innovations, and a resident can begin by doing a search on building management software.

AutomatedBuildings.com is a good source for information on the operation of large office buildings and hospitals, but there is some crossover in the technology. Ken Sinclair is editor/owner of AutomatedBuildings.com, a 10-year-old web publication located in Vancouver Island, Canada. Sinclair says he’s seen the movement of many building functions to online operations, making what were once personnel-intensive tasks the province of Internet-based help. “We’ve been tracking the movement of whole functions to web-based businesses,” Sinclair says.

BuildingLink.com, LLC, a seven-year-old web-based business in Long Island City, is one example of the trend. The company helps to collect, store, and distribute information for buildings, and serves 450 buildings in New York, New Jersey, and eight other states. BuildingLink helps buildings with recurring tasks, like sending the correct paperwork for work orders to all of the parties responsible, such as the building manager or an exterminator. The firm also gives residents access to community-related information, including work order forms and meeting schedules.

“We provide easy to use work order technology, and solutions for recurring tasks, such as preventative maintenance,” says Fran Besdin, marketing manager of BuildingLink.com. “If you’re a maintenance person, and something goes wrong in the middle of the night, you can enter the info into the system.”

BuildingLink provides a package delivery system (which also does pick-ups), that notifies the doorman or resident of the package to be dropped off or picked up.

When a crane recently collapsed on a building in New York City, the communications system that BuildingLink provided was essential to residents of the building and surrounding buildings that weren’t hit by the crane, Besdin explains. “The only people who knew when they could get back into their building were people from BuildingLink buildings,” she says.

Such technology can provide savings to a building in the event of a catastrophe, Besdin explains. One of BuildingLink’s clients had a major fire, and because every work order for the repairs was time-stamped, the building got an additional $8,000 from the insurance company. “They got it because they documented all of the work they did,” Besdin says.

Siemens Building Technologies has been involved with wireless technology for years, says Kuehn. “One of the coolest innovations is the introduction of wireless controls for HVAC systems,” he says. “We’ve pioneered wireless mesh technology that allows for more sophisticated control systems. It allows a building with a dated system to upgrade for better control, and for lower energy costs.”

U.S. Energy Group is a Fresh Meadows, N.Y.-based company that sells various systems to monitor and efficiently operate buildings. Even older buildings with dated systems can benefit from available technology, says Dan Margulies, the company’s chief operating officer. “We install indoor temperature sensors, and software to allow owners/managers to set different temperatures at different times of the day,” Margulies explains. For buildings of 10-12 stories, sensors are placed in the top floor apartments, and in the apartments on one other floor.

“Much of the latest technology in buildings systems is wireless, says Scott Jordan, a systems consultant for Piscataway, N.J.-based Electronics Design Group. Jordan says buildings are finding these systems attractive because they are economical.

U.S. Energy Group offers USE Manager, an energy management system for buildings. The online monitoring program allows a building manager, a super or on-site maintenance personnel to have access to heating system and fuel use information for a building. With the system, users can create alerts for maintenance and repair. The system can notify managers, supers, or their pre-assigned vendors, of critical conditions. Staff will be informed if under-heating or over-heating occurs, or if hot water temperature problems happen, or if the other problems happen.

With USE Manager, an efficiency alert is triggered when the building’s boiler has been running for a long, possibly inordinate, amount of time. The long boiler run-time alert is triggered when a building falls into the highest 20 percent of longest running boilers in buildings. The system also has a fuel gauge alert that double-checks deliveries to prevent “short” oil deliveries, as well as providing low fuel warnings. The system allows managers to track inventory, track daily fuel use and compare fuel use to other periods. From systems that limit energy consumption during different times of the day, to whole-building monitoring systems, technologies are out there that can help a building’s bottom line.

Innovations available to homeowners and large residential buildings are becoming more sought after, because of the value that they bring to a home. High fuel costs have increased interest in energy costs, which has driven sales of new technology. “We’re starting to see marketing of complexes because they’re greener than others,” Sinclair says. “People want to be involved with environmentally correct projects. They’ll pay a premium for that.”

Some homes are equipped with astronomical time-clocks, which are pre-set to close window shades 10 minutes prior to sunrise, and at other times of the day, to protect interior design, furniture, and artwork. Such a system also can also reduce energy costs for an apartment, by helping to reduce over-heating and under-heating of the building.

“Even a 50-year-old building could benefit [from a retrofit of its system],” Kuehn says, noting that such buildings’ owners could get a loan to do the work, based upon improvements that will lower the building’s energy use. “You could be looking at a savings of 30 to 40 percent.”

Technological improvements also can reduce a building’s operating expenses, which will add value to each unit in the building. “If you have lower maintenance costs, that certainly adds value,” Margulies says. “If the apartments are comfortable and not over-heated, that also adds value.”

Web-based tools streamline operations, Besdin says. “There’s time efficiency, and you can also go paperless. When you save time, you save money,” she says.

It’s important for building software to be compatible with other software. U.S. Energy Group is designing its software so that in the future, clients with the company’s equipment will be able to integrate other programs to use the equipment, Margulies says.

The upgrading of a building’s boiler, windows, or all of its dishwashers, sometimes can be made more attractive by government incentives. The U.S. Department of Energy offers many rebates for consumers that install Energy Star windows and appliances, such as refrigerators and dishwashers. LEED certification is another way for a building to benefit from capital improvements.

The idea of building green is catching on, Sinclair says. People can see how good these buildings are for the environment… It’s about taking an iconic building and not smashing it, but making it better,” he says.

Installing a new system in a residential building is not necessarily a costly, time-consuming job. With U.S. Energy’s Energy Management system, a building will get a package that includes a boiler-control system; an HVAC functions monitoring system; and a thermostat system. An installation of the system takes a day, Margulies says. The lengthiest part of the job is getting access to apartments to install enough wireless sensors.

Some systems, such as demand-response systems and co-generation will become more attractive to more building managers and more board members. And building operations are likely to go online even more than they have. The fact that residential buildings are marketed on the Internet is a relatively recent change, Sinclair says.

“Our first article said that every building would have a web address,” Sinclair says. “Anything that is web-based is less resource-intensive. There’s a relationship between e-commerce and being green. With web-type management, you can have millions of square feet that only a couple of people will be looking over.”

The possibility of a building consuming little energy from the grid also is becoming a reality for more buildings. Net Zero buildings are increasing in number, because of the convergence of high-energy costs and greater energy needs. A Net Zero building generates (annually speaking) all of its own power. Most commonly, such a building creates its own power through photovoltaic panels on the roof, which sometimes will create excess power that is transferred back to the grid. Sinclair says that such buildings are the future of residential living.

“As energy prices continue to increase, cooperative owners need to scrutinize their energy use,” Kuehn says. “And they need to look at the control systems for chillers and boilers.” Although many building managers and boards are very environmentally-motivated, with energy costs so high, now there is a more pressing reason for buildings to look for more efficient systems in their buildings: their bottom line.